YouGov's Advertiser of the Month - November 2022
Insights Industry
Back

YouGov's Advertiser of the Month - November 2022

Which brands made it to the top?

Confectionary brand HOHOs saw the largest growth this month in terms of Ad Awareness in Egypt, followed by e-commerce giant Jumia.com at number two and music streamer Spotify in third place. According to YouGov BrandIndex data, which tracks brand perception on a daily basis, these three brands saw the highest increase in Ad Awareness during November, making them our top three Advertisers of the Month in Egypt.

Ad Awareness asks consumers if they have seen an advertisement for a brand in the previous two weeks, and the difference between low and high scores for the month determines our Advertisers of the Month. 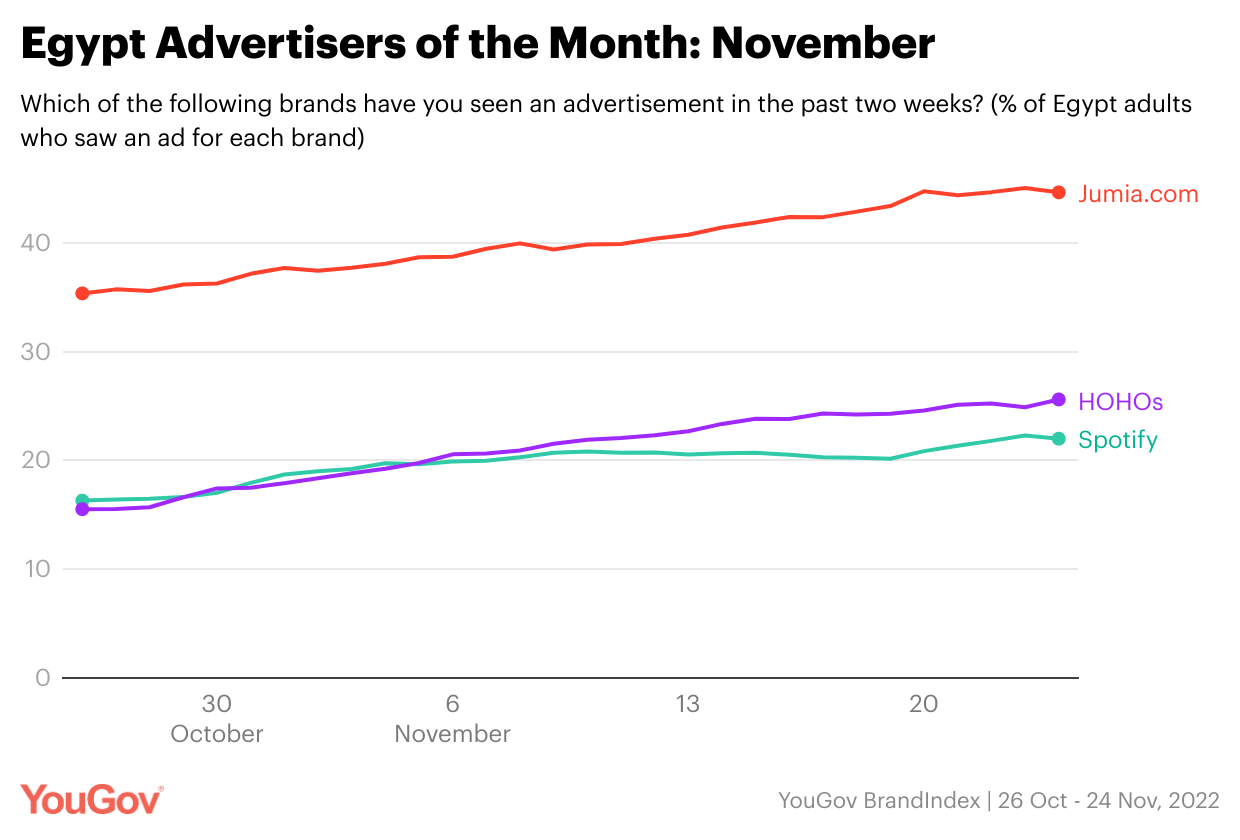 HOHOs introduced a new product called HOHOs Mix for which it recently released an ad. The video has garnered more than nine million views on YouTube. YouGov BrandIndex shows HOHOs Ad Awareness metric rose by 10 percentage points from 15.6% on October 26 to 25.6% on November 24.

Jumia.com, which is number two on our list, saw a rise of 9.7 percentage points from 35.4% on October 26 to 45.1% on November 23. Often dubbed as the ‘Amazon of Africa’, this e-commerce giant recently appointed a new management board. Jumia.com also announced that it generated over $50 million in revenue in Q3, up by 18% since last year. The brand recently launched its Black Friday campaign encouraging people to spend affordably reflecting Egypt’s current economic challenges.

Methodology
YouGov BrandIndex collects data on thousands of brands every day. A brand’s Ad Awareness score is based on the question: “Which of the following consumer brands have you seen an advertisement for in the past two weeks?” Data from surveys of adults aged 18 years and above residing in Egypt from 26 October to 24 November 2022. Ad Awareness scores are based on a four-week moving average. The change in scores for each brand is calculated by taking the difference between the highest and lowest scoring days within the period. Learn more about BrandIndex.