IAS vs MOAT: which one should you choose?
Insights Industry
Back

IAS vs MOAT: which one should you choose? 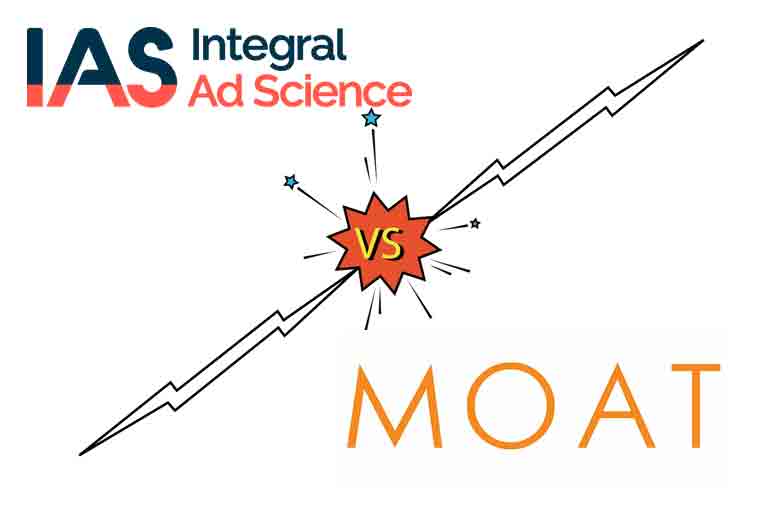 Last year’s brand safety debacle brought to light some key issues with digital advertising. Among these were viewability and ad fraud.

Ad fraud is rather self-explanatory, but what is viewability?

Viewability is essentially an online advertising metric that determines if an ad is actually ‘viewable’, and then, allows advertisers to pay only for ads that are ‘viewable’.

According to the Media Ratings Council (MRC), on desktop,

However, different platforms, publishers, agencies and clients may have different definitions of viewability.

Why is it so important?

According to WPP’s global agency, The&Partnership, ad fraud was estimated to cost brands $16.4 billion globally in 2017, and nearly 20 percent of total digital ad spend was wasted in 2016. Furthermore, MENA marketers and agencies cited “metrics and measurement” (27%) and “ad fraud” (16%) as a challenge to mobile advertising in 2017, according to the Mobile Marketing Association (MMA). Add to this Google and Facebook’s walled garden approach, which, in part, led to big brands like GM, Pepsico and P&G cutting spends.

MUST READ: Do people trust media more than PR

In order to re-establish the two pillars of trust and transparency, the industry came up with third-party verification tools to measure and verify their digital spend. In April 2017, YouTube started working with DoubleVerify and Integral Ad Science (IAS) as well as MRC-approved agencies to ensure ad dollars are wisely spent. Soon enough, the likes of Facebook and Twitter also started working tools such as, MOAT Integral Ad Science (IAS), Nielsen, and comScore, in addition to regional networks such as Omnicom Media Group and Choueiri’s DMS, which was the first in the region to partner with MOAT.

Looking at the two most commonly used tools – other than those belonging to Google – in the region, IAS and MOAT, it can be perplexing for agencies – and publishers – to understand which one is better suited for their business based on accuracy, reporting systems, and compatibility.

ALSO READ: P&G Unilever are cutting agency fees again. How much is it this time?

So, we asked the media agencies in the region which one they use and here’s their verdict:

IAS, like any other third-party ad verification tool, offers a standard report. However, I personally prefer MOAT because it has a better dashboard and is customizable, which is especially important as we can then get reporting based on GroupM’s viewability standards – not just MRC. Moreover, it also makes use of eye-tracking studies to show which areas of a website see the highest user interaction, as well, as a scale of to score buy quality based on viewability, brand safety, etc. The dashboard provides a MOAT brand score report, which is a measure of attention paid to your advertising. Like a financial credit score, it uses a rating scale of 300-850 based on factors like interaction, in view time which is great visual at a campaign and advertiser level.

We follow a technology-agnostic approach and therefore, partner with a variety of ad technology solutions in the marketplace. We don’t do a direct comparison between Moat and IAS as such; however, according to an internal study, we established MOAT’s walled garden interoperability and direct integrations with Facebook, YouTube and Snapchat with pixel-less integrations as well as their ease of use, rich analytics and data exports makes it a strong player. We believe its functionality, pipeline, and media neutrality are best in class along with reporting metrics.

Both platforms collect a ton of data with MOAT providing a wider selection of reporting metrics on viewability, video completion quality, in-view time, out of sight rate, invalid traffic and human traffic etc. The frequency of releasing new or beta updates is faster with MOAT along with their ability to update benchmark reports regularly. It also has a better reporting UI and it’s easier for us to provide our clients their dashboard access, which isn’t available in IAS.

However, IAS assures more control over brand safety while we have to implement separate tags but its pre-bid feature evaluates the ad environment before they are served which is lacking in MOAT as they provide insights only in reporting.

[However], the level of data that we receive from MOAT is advanced, accurate and easier to access and it helps us analyze and optimize our campaigns real time.”

Our brands’ priority is that their digital ads should be seen by real people for a reasonable amount of time.

We recommend MOAT as it is transparent; easier to develop a measurement plan around for the effectiveness of our campaign and it is continually updated thus ensuring efficient campaign measurement are in place with industry standards.

All the tools provide you with almost similar results and if there was to be a slight difference, it would be in how the tool verifies rather than the result itself.

Brands need to take into consideration the pricing model because brand safety, which is important, will be covered through both tools. They need to look at how much the tool is costing versus how much the tool is saving; unviewed ads are a waste of money at the end of the day, and the tool is helping save that.

MOAT is believed to be more accurate and stricter when identifying fraud and audience targeting. Another difference that perhaps favors a tool over the other is having UIs on publisher side to pull data – something MOAT has invested in.

MOAT in the region is having more presence and has started to infiltrate the market.

Personally, the bottom line [is that I] would favor MOAT due to the stricter fraud capabilities, which at the end of the day is the main purpose.

*Note: Initiative works with both DoubleVerify and MOAT; the reason for the former being its partnership with Coty

Verdict: A bit of both

I believe it’s a case of what the brand is actually looking for.

For example, if it’s a financial institution like a bank that does not want its ads placed around any suspicious display activities IAS is the way to go. With its pre-bid segments, IAS can apply media quality data even before bids are ever placed. It not only measures but also, filters the quality of traffic the ads bid on.

MOAT, on the other hand, is integrated with major publishers across the region (including the global social giants) and has the most granular reporting metrics such as Moat Video Score (MVS) and heatmaps that helps the brand and agency to take actionable insights from them.

The major difference is on metrics and parameters tracked by MOAT. Key advantages are:

Verdict: A bit of both, but leaning toward IAS

IAS and MOAT are both online advertising technologies that postulate ad viewability services.

Both have pre-bid options to arrive at the CPM bid and select websites with ‘high viewable rates’ before going through the manual optimization. Both have extensive reporting systems with granular details across all channels. However, the real-time data signals that IAS provides is unique and could be used at an advanced level.

Both tools are beneficial so we opt for either IAS or MOAT based on client preferences. Although IAS is available through our DSP, we are open to exploring MOAT.

PHD follows a technology-agnostic approach and [we] have partnered with both MOAT and IAS based on our clients’ specific needs. We are constantly reviewing our tech partners to ensure we offer our clients the best in market service. While we cannot make a direct comparison between MOAT and IAS, after performing an internal study on the four leading companies in the region, we found MOAT to be a preferred option in most instances. This conclusion was reached based on a number of factors including its pixel-less integrations, walled garden interoperability, MRC certifications, customizable dashboard, regular local benchmark updates, heat map reporting, and the company’s collaborative approach to improving the platform.

Declined to comment initially, later adding that as an agency it selects the best tool as per the client’s needs, and wouldn’t want to specify any preference.

We also spoke to MMP that works with publishers across the region:

We have been using MOAT for over a year now across all our publishers and its going great. We are able to better understand our publisher websites and tackle viewability and performance matters quickly and swiftly. MOAT’s reporting tool is crucial for our publisher partners to access to and be able to see how well or poorly they are performing. However, we are looking to explore opportunities of trial with IAS and are currently in talks with them.

Although IAS commands a higher market share than MOAT, provides a pre-bid solution, and has higher integration with websites and DSPs, MOAT is the recommended partner in the region due to its accuracy, strict controls, value-add services and easy, user-friendly and customizable reporting.