Twitter Launches #StartWithThem and #TwitterFronts Ahead Of Ramadan
Insights Industry
Back 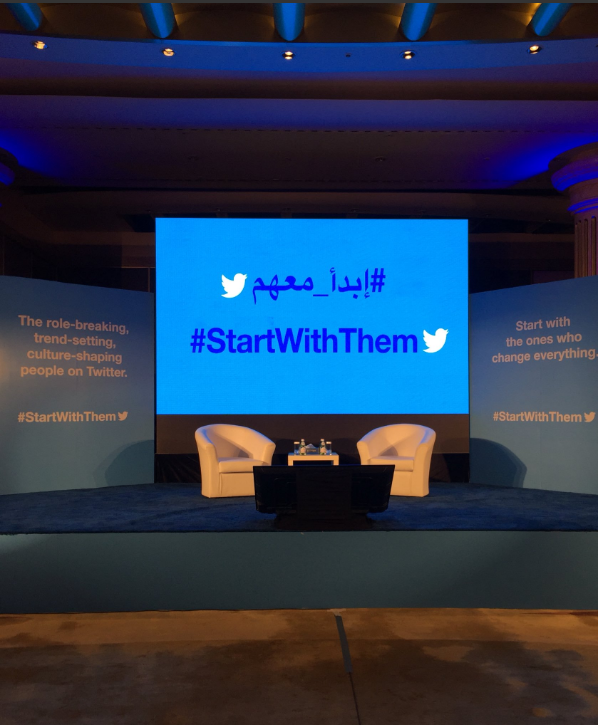 Twitter celebrated the regional launch of its global #StartWithThem and #TwitterFronts initiatives in March and April in both Dubai and Riyadh. Following its global #WhatsHappening motto that has been at the center of Twitter’s marketing campaigns over the past few years, #StartWithThem highlights the unique ways that Twitter has been leveraged in the MENA region, including for charitable causes.

In a nod to traditional television ‘upfronts’ that have been longtime staples of the American media industry, showcasing upcoming programming from TV networks to advertising executives, #TwitterFronts was held a few weeks before the MENA region’s busiest season, Ramadan.

Looking forward to a month when screen time will surge regionally, Twitter’s Dubai team was joined by their colleagues from London and partners to reveal some of the content partnerships programming scheduled for Ramadan as well as new research. The latter revolved around recent survey results about the popularity of video in several Arab countries, stating that Twitter is a main source for video content for 72 percent of Twitter users in both Saudi Arabia and UAE, as well 62 percent in Egypt.

The popularity of video has been a key reason Twitter is encouraging brands to benefit from the reach of premium video content by placing contextual advertising within the Twitter feeds of the most popular accounts of digital media publishers.

According to Twitter’s EMEA Head of Content Partnerships Theo Luke, this is part of a growing global trend.

“Across the world, we find that Twitter’s audience leans in to our partners’ premium real time video and our advertisers appreciate aligning with our brand safe inventory; whether via global-firsts originating from MENA which include custom productions which position brands as viable distribution partners, or by accessing original programs and video highlight clips,” he explained.

A look back at the highlights of our first #TwitterFronts MENA event held in Dubai early this month 👇📹 pic.twitter.com/edwBHpUQYQ

Besides the commercial benefits of Twitter use that was presented to marketing industry professionals at #TwitterFronts, the societal and philanthropic impact of the platform was on full display at #StartWithThem, an event which also debuted a printed ‘Twitter book’ called #StartWithThem. The book features recommended accounts to follow across the MENA region, such as Butheina Kazim, founder of Dubai’s premier independent film theatre Cinema Akil at Al Serkal Avenue.

During the event, journalist Zeina Yazigi, who is also an ambassador for UNHCR, the UN  Refugees Agency, explained how her tweet spurred a charitable movement that raised over $100,000 in early 2019 for Syrian refugees to cope with the harsh winter climate.

“The #NewYearsChallenge started on the last week of the year, as a social media challenge to donate to UNHCR, to help them provide refugees with urgent winter aid, such as blankets, heaters, mattresses and tents. I launched the challenge through my social media account, challenging three celebrities by name to follow suit: they did and the challenge rapidly spread among celebrities in Egypt, Lebanon, Saudi Arabia and UAE. We collected more than $100,000 with zero spending,” said Yazigi.

Yazigi and UNHCR have no plans of stopping there when it comes to digital donations. On April 25 in Dubai, UNHCR and its partner DinarStandard published the “UNHCR Zakat Program: 2019 Launch Report” amidst the launch of UNHCR’s Refugee Zakat Fund just in time for Ramadan. The platform will allow for crucial Zakat donations, which are an integral part of Ramadan, to be provided to people in need in several MENA countries.

As the first day of Ramadan approaches, Yazigi has high hopes that Twitter and social media in general can again spur generous contributions during Ramadan 2019 and beyond to UNHCR’s new Zakat fund.