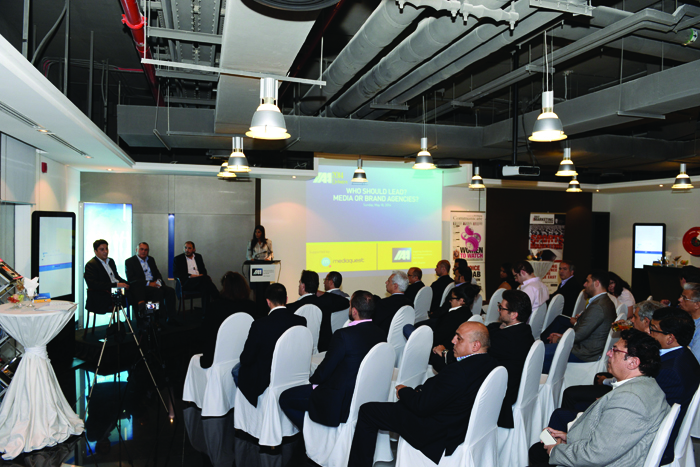 “These are times when each entity within the communications ecosystem seeks to articulate its unique contribution to brand custodianship. I ask myself: whom should we believe? And in the midst of uncertainty, I am convinced that what is being played today is a zero-sum game,” says Lance De Masi, president of the International Advertising Association (IAA) UAE Chapter, while speaking at the IAA’s second debate session: “Who Should Lead: Media or Brand Agencies?”. Representing media and brand agencies, as well as clients, session panelists were Tarek Miknas, CEO at FP7; John Antoniades, CEO at Starcom Mediavest Group (SMG); and, Fadi Ghosn, director of marketing, sales and service at Ford Middle East and Africa.

“[Buying space to broadcast messages] is a large amount of what we [media agencies] are currently doing, but we [SMG] have decided that, if we carry on like this, we will not have a business in the next ten years,” explains Antoniades, adding that media agencies’ digital convergence, through the build-up of data houses and investments into new technologies, may put the latter in the lead.

“In the past 12 months alone, we’ve partnered with Twitter and audience-on-demand platform Axiom, among others. Will we lead eventually? Unless ad agencies change their game beyond the 30-second commercial solution, I believe we will,” he points out.

Discussing creative agencies’ shortcomings in catching up with increasing client demands for data, Miknas says: “It’s true that clients are asking for number crunching and data. But introducing new practices is not something that is new to us. Ultimately, we will end up somewhere in the middle with a hybrid model of an agency, where we will be seeing a lot more specializations being integrated into bigger platforms. However, we don’t want to rely on just data. There will always have to be an emotional connection that a brand has to spark.”

When asked about the noticeable change at award shows, such as the Dubai Lynx, where media and creative agencies have been overtaking each other’s categories, Antoniades is reserved about award-winning works, which he says tend to be “a one-off piece of innovation and activation, rather than a through-the-line” campaign. However, he admits that creative agencies are better at the creative use of certain media, “which is why they also do well at Cannes [Lions Festival].”

That may well be the case, but recent regional award shows saw media and creative agencies from the same group submitting entries against, rather than with, each other. “It’s because everyone’s getting busy. It’s not that they don’t want to collaborate,” says Miknas. Antoniades, on the other hand, adds that the sheer geographic proximity between Publicis Groupe’s SMG and Leo Burnett makes it easy for the two to often exchange works on clients. But, ultimately, “clients have to decide who leads on a certain project,” he asserts.

As a client, Ghosn’s concern is hardly on the race between media and creative agencies, but he has experienced firsthand the downfalls of trying to force collaboration between several agencies working on the same brief. “We are going back to a business model where the client needs to task one unit within the same group or agency with a brief. In the US, Ford created an agency within the WPP Group, which takes resources from other agencies and works under one team. It pays one fee as a client,” he says. This model serves particularly well in situations where media and creative agencies for one client are from different groups and where clients often end up “policing the competition between agencies. I don’t think it’s a sustainable model,” adds Ghosn. “The clients will get to a point of wanting one strategist and one set of insights for their communications, rather than paying for an account planner and a media planner doing the same work at two different companies; which will force the conversation around how to create a more full-service solution for our clients,” says Antoniades.

Although Miknas says there have been some instances where FP7’s collaboration with some media agencies from different groups felt “like a political battle”, he believes that the “next generation of talents is not as competitive”. But, the question is: “Where will young talents want to work? Often, if young talents see that an agency is investing in the future, that, all of a sudden, becomes more attractive to them,” explains Antoniades. The future he’s referring to could be led by media agencies, which are offering 360-degree digital solutions, such as paid and search advertising, SEO, branded content, sponsorships and even editorial. “There is more money to be made right now than to have people competing over the same territories,” he says.

Catch a glimpse of the debate on our YouTube channel.