ABG, the leading industry body that advocates for self-regulation in the advertising world and the Coalition for Better Ads (CBA) hosted a webinar yesterday to share with the region's advertisers, marketers and publishers-  the latest data driven research in in-app advertising as well as short form video ads and learn what consumers like and don’t like when it comes to these advertising formats. The session was hosted by Neal Thurman, Director, Coalition for Better Ads and Co-founder, Brand Safety Institute. Communicate highlights the key takeaways.

The CBA is a body that comprises of members from leading international trade associations and companies involved in online media and was created to improve consumers’ experience with online advertising. The Coalition leverages consumer insights and cross-industry expertise to develop and implement new global standards for online advertising that address consumer expectations. In short - removing bad ad formats from the consumer user experience.

Since it's inception, the CBA has created standards in 3 environments - Desktop Web, Mobile Web and Short Form Video. The Desktop and Mobile Web standards were launched in 2018 in North America and Europe and became the global standard in 2019. Short-form video ad standard were announced and went live in 2020.

Standards In the Works

During the webinar, the CBA had also shared standardization projects that were still in the works. The CBA is currently reviewing in-app advertising standards. With the rise in popularity in Gaming, especially on mobile, in-app advertising has increased exponentially, especially in markets such as Asia and the Middle East.

As part of research, the CBA tests experiences in a simualted environment, to understand what kind of advertising experience is pleasant and what's not. Based on the first wave of data, the least favorite experiences of consumers are the interruptive adverts with no option to skip. Consumers are extremely receptive to adverts that provide an option to opt-out or are incentivized with rewards, provided they're logically placed.

Another initiative the CBA is currently working on is redefining the definition of in-feed. When the CBA began, there were relatively few social feeds making a mark in the digital advertising space but over the years they've continued to grow in popularity. Now, the CBA is currently trying to redefine the definition of a feed and understand how it'll fit with the other existing standards that are already in place. The reason for this is because there are already feeds existing as part of the digital experience, for eg a banner ad placement at the top of a webpage and social feed in the middle. It's important for the industry to understand what standards apply in such situations.

The State of Ad-Block Installs

The Coalition has worked extensively over the last 4-5 years to improve the ad experience for users online. Publishers require advertising in order to be continue to deliver engaging, free content to users. However, somewhere down the line, as digital advertising continued to expand, it also began to become intrusive to the consumer experience while browsing and in some instances, downright creepy. This resulted in frustrated consumers installing ad blockers on browsers in order to prevent seeing these adverts, which is not good for advertisers and publishers.

However, data from the webinar shows that improvement in advertising standards have resulted in fewer and fewer daily ad blockers install rate globally. The usage rate in the MIddle East has also reduced since the Better Ads Standards launched globally which was in 2019. 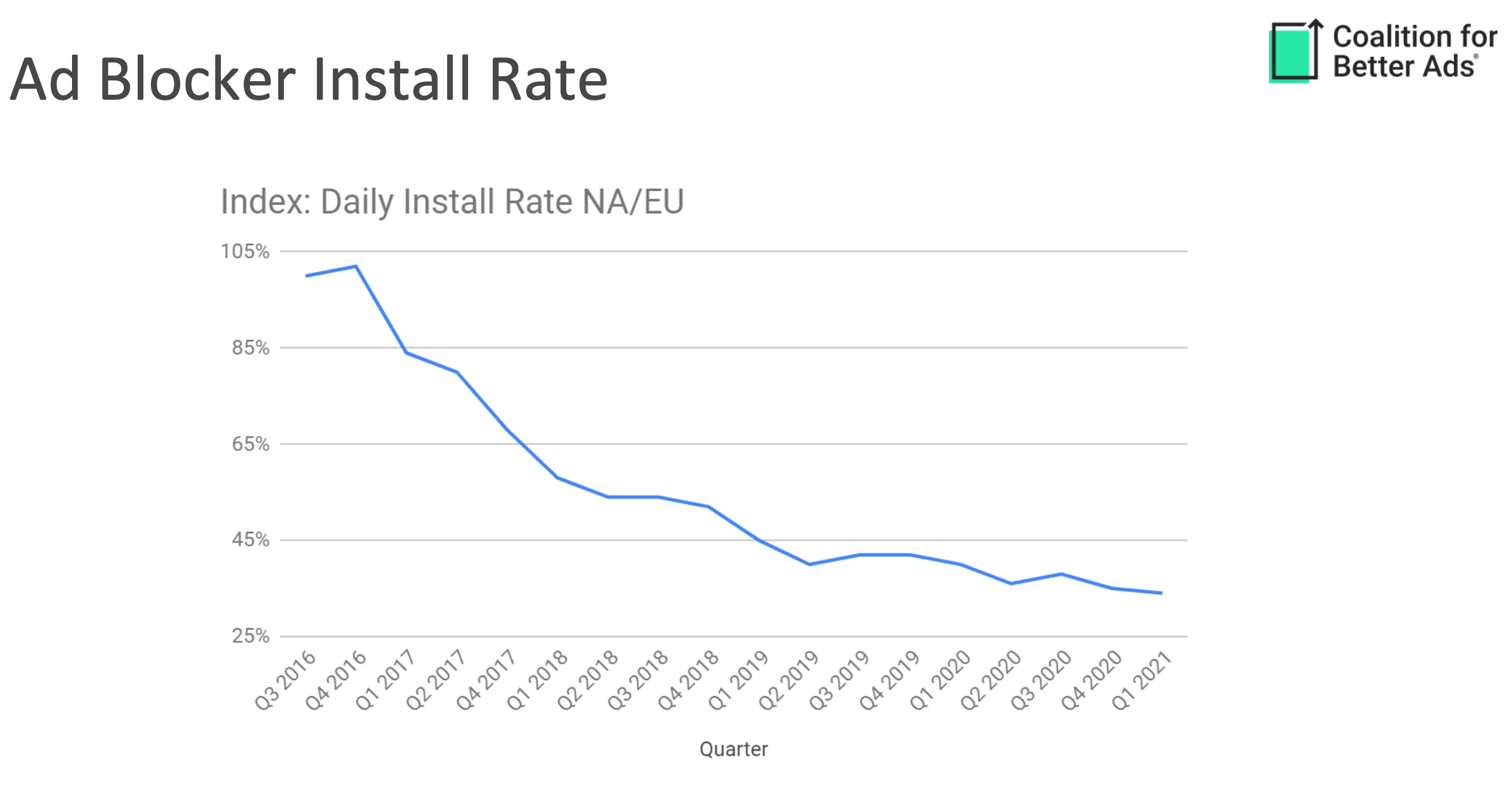 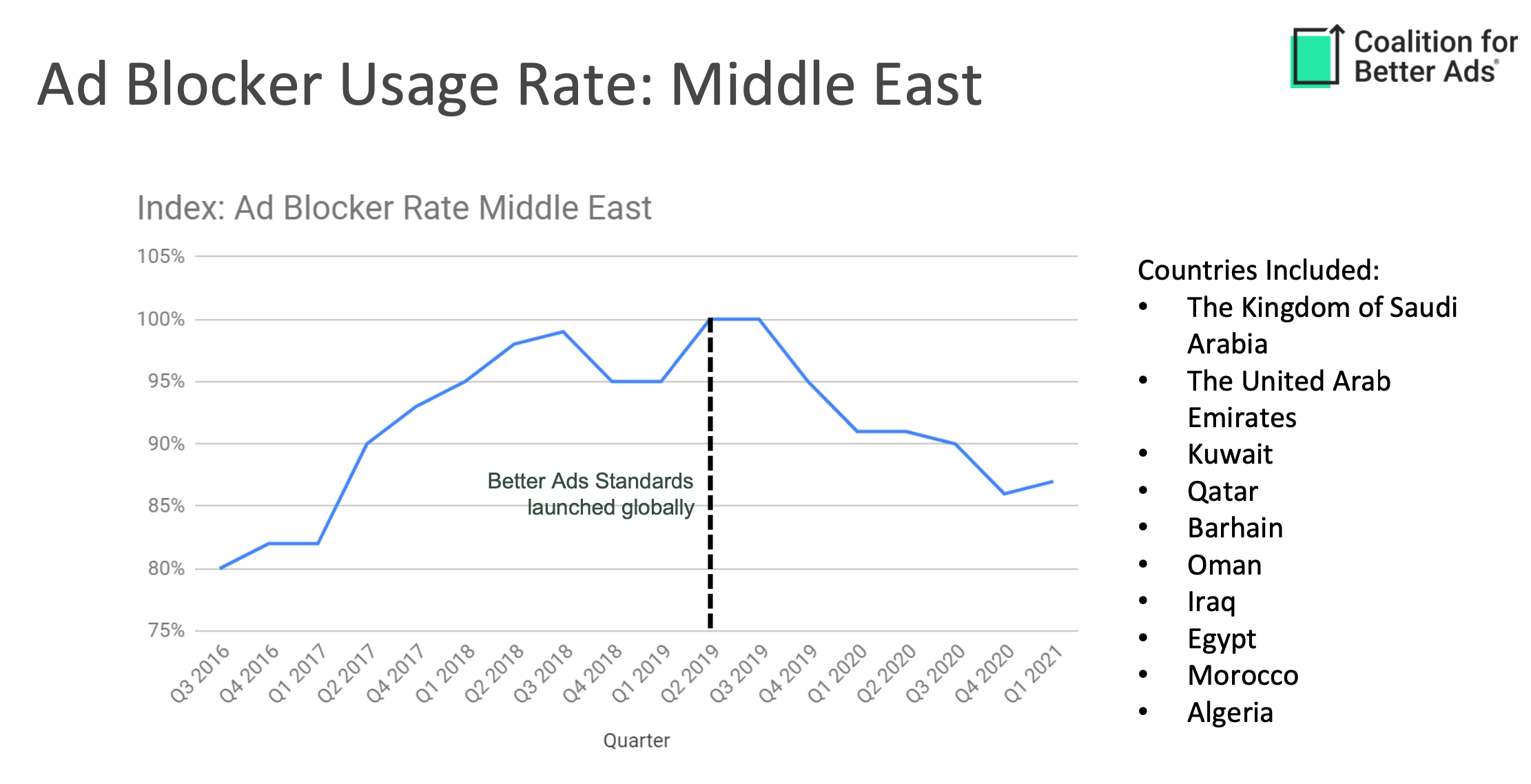 The dynamics of the online advertising world continues to grow and change. As we continue to expand and invest more in this domain, it's important to realize that the core foundations of advertising should be to work hand in hand with publishers and deliver a seamless experience for consumers that'll benefit every party.