FIFA World Cup Qatar 2022 has created a lot of excitement amongst sports enthusiasts across the globe. With the first match set to kick off in November, fans in the UAE and KSA are eagerly waiting for the first World Cup to be hosted in the region.

Data from a new YouGov re-contact study among those who have shown interest in FIFA Football World Cup reveals seven in ten fans in UAE plan to watch FIFA World Cup Qatar 2022 at home, either alone or with friends (69%). One in eight (17%) intend to watch it out of home (in a bar or restaurant) or at dedicated fan zones. A quarter, however, plans on going one step further and have either already or plan to purchase a ticket to watch the World Cup live (26%). 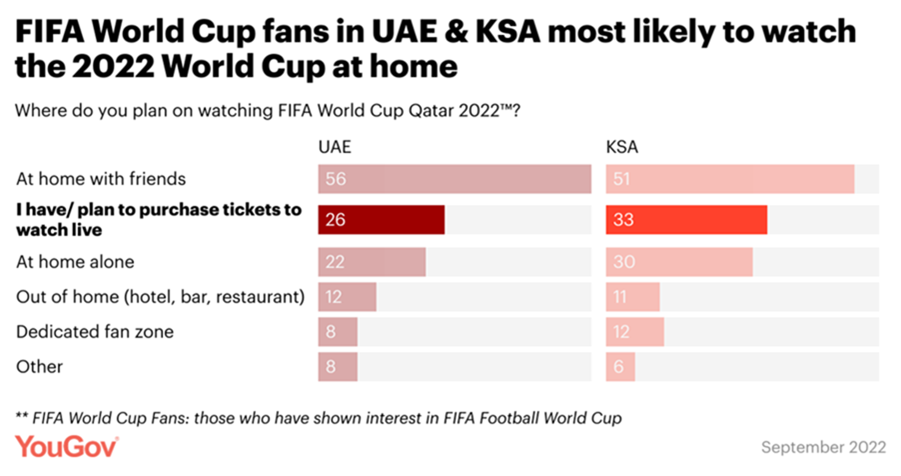 Although the World Cup is being hosted in Qatar, there is likely to be a ripple effect across the rest of the region, with 63% of fans expecting their spending to increase during this time, presenting a good opportunity for brands to engage consumers. When asked about the likely impact of FIFA World Cup Qatar 2022, seven in ten fans in UAE & KSA envision a positive impact on the local economy, as well as an understanding of the region & local cultures, with UAE fans feeling this more strongly than KSA fans. Brands can benefit from the positive sentiment around the event by understanding the different audience profiles intending to watch the World Cup either at home or out of the home.

To demonstrate this, we used YouGov’s audience segmentation tool -  Profiles, to take a deeper dive into the profiles of these different audiences. Data shows fans planning to watch the World Cup (both at home & out of home) are young individuals, with the largest proportion belonging to the 35-44 years age group. They are married, and currently residing in Dubai, with those planning to watch the event out of the home more likely to be males than those watching it at home (73% OOH vs 60% at home). Those earning over 200,000 AED are significantly more likely to be found amongst the OOH audience than the at-home audience (21% vs 13%). 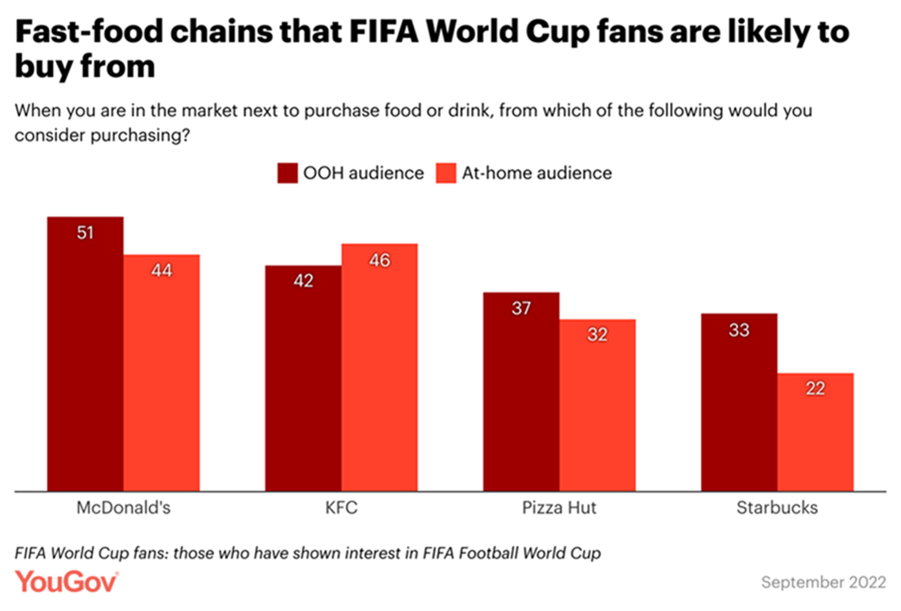 Data on their brand usage reveals consumers within both the groups are likely to consider buying from fast-food chains like McDonald’s (51% OOH vs 44% at-home), KFC (42% vs 46%), Pizza Hut (37% vs 32%) and Starbucks, with the OOH audience being more likely than the at-home audience to consider buying from Starbucks when next in market to buy food or drinks (33% vs 22%).

Specific psychographic data around the OOH group shows that this audience tends to be environmentally conscious and is likely to be influenced by their belief system. They believe more strongly than the at-home audience that green energy is the future (77% vs 69%) and do not mind paying extra for good quality products (68% vs 56%).

Their attitudes toward advertising reveal fans belonging to both groups show affinity toward social media. A large proportion within each group claims they are more likely to engage with advertisements on social media than on regular websites.

YouGov Profiles data is from September 2022