Welcome to the kingdom
Insights Industry
Back

Welcome to the kingdom 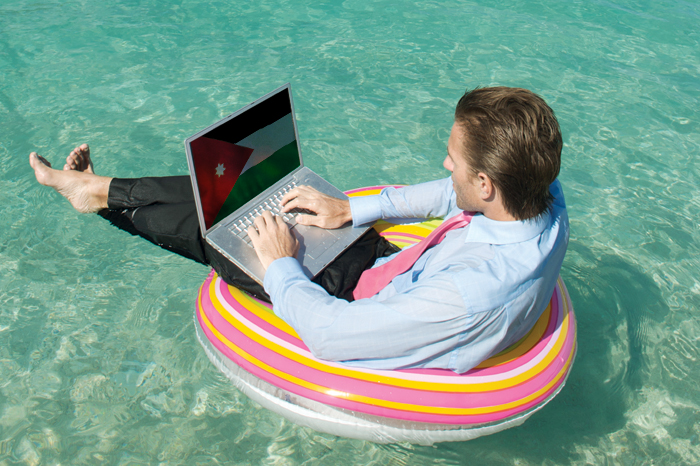 While the economic crisis pulls Jordan’s advertising industry underwater, digital is saving it from drowning

Back in June 2011, Communicate Levant’s cover story about Jordan was predicting a bright online future for the kingdom. To a certain extent, it has been proven right: the Internet penetration rate that was hovering at 27 percent then, reached 56 percent by the end of 2013, as per Ipsos’ statistics, with approximately six out of 10 Jordanians using the Internet. Moreover, Jordan ranks first in the region in terms of penetration rates of social networks among Internet users at 95 percent, compared with Egypt (89 percent), the UAE, Lebanon and Kuwait (87 percent each), and Saudi Arabia (81 percent).

“Jordan is a young country, with approximately 70 percent of its population under 30 years old. There are 1.9 million Jordanian Internet users, 50 percent of which are aged between 15 and 30. So the digital trend we saw kicking off in 2012 is continuing to grow with brands allocating bigger budgets to it,” says business unit director at JWT Jordan, Rula Al Khadra.

Hard times. As far as advertising in general is concerned, things are all but rosy in Jordan.
Telecom operators, airline companies, banks and real estate firms, are the top advertising spenders in the kingdom, as per media agencies’ numbers.  However, this flow of budgets is not keeping the Jordanian advertising industry from facing numerous challenges.
Firstly, “As it stands today, the Jordanian market is a modest one, which brings its own set of challenges in terms of scale and we are all aware of it. In the not too distant future, we believe the key players will be real estate firms, as well as telcos, which are launching their 4G services,” says Al Khadra.
Moreover, managing director of Mindshare Jordan, Jac Asmar, says: “The major challenge, which is affecting the advertising industry in our country, is the lack of understanding that most clients have of the role of advertising and agencies, whether brand, media or PR. Agencies are not seen as partners and an extension of the clients’ respective marketing teams, but rather as suppliers who provide a certain service. For some, there is still a confusion regarding the roles of the marketing team and the agency, and there is no clear differentiation of each team’s role in the communication sector. Things are bound to change, but it will take time. The economy and its surrounding political situation are affecting the market in general; the industry in particular. Unless there is a drastic change locally and regionally, things will not change for the better.”
Add to this mix difficult economic conditions, and the industry is in a dire state of play. “The last four years have been tough and the market is shrinking. In 2013, we came back to the same levels of monitored advertising investments in 2009,” says Mindshare’s Asmar, who explains that, due to the market’s culture of discounts and special deals, brands do not invest much in advertising and focus more on promotions. “Creativity does not rank high for most of the clients. There is mostly a very basic approach to communication with few exceptions,” he explains.
“Given the economic crisis, advertising campaigns turned from a brand focus to a tactical one in the past few years. Offers and promotions were the main activities that brands were communicating,” says Al Khadra, who shows a little bit more optimism by saying that the trend seems to be moving back towards more strategic long-term brand-building campaigns.

Vital change. Indeed, the Jordanian media scene is evolving, slowly but surely, forced by the change in advertisers’ spending habits and rapidly growing interest in digital. For traditional media to survive, it has no choice but to adapt where and how it can.
Asmar explains: “Traditional media – mainly print – is suffering, with record-low readership for newspapers and magazines. Outdoor and radio are doing well, but the scene is very erratic for the former with few well established companies and a lot of small players.”
TV seems better poised, slightly, with the comeback of local stations, specifically the launch of a new channel, Ro’ya [established in 2011].  “Local and relevant content is being produced and featured, which in turn, is drawing in a growing number of viewers. Local comedy shows, talent shows and sports programs are drawing both audiences and brands alike,” says Al Khadra, while head of planning at MEC Jordan, Sawsan Hayek, tells Communicate Levant that the other emerging trend in Jordan is digital TV. “Agencies are combining their digital and TV departments because consumers need to read and see everything they want at the time they desire; they’re not willing to follow TV stations anymore, but they are looking for those that are going to follow them,” she explains.
However, it comes as no surprise that Jordan’s real focus today is digital. Asmar, who agrees that local TV has potential with Ro’ya in terms of advertising, highlights that this media is still in its infancy, and that social media, Facebook in particular, is now Jordan’s major online advertising platform.  Hayek concurrs: “We all agree that Jordan’s media trends are going towards digital, but what we are witnessing today is that they are picking up in mobile. The penetration rate of smartphones in 2015 is expected to reach 55 percent to 60 percent. It’s not about how people are paying for advertising in Jordan anymore, it’s about how content is being generated. I believe that paid media is giving up its place to social media, thus companies and advertisers who want to pick up on digital trends have to look after their content,” she explains.
This shifting media lanscape translates into another welcome development: progress on the creative side of the business. Spurred by a developing digital landscape, “the market has begun to push creative boundaries. We are now seeing brands tap into the cultural trend, which is focusing considerable energy on the arts, entertainment and music scene. I have to hand it to the clients who are aware and acting fast,” Al Khadra explains, adding that JWT Jordan’s clients have been pushing the team to pioneer ideas, such as the campaign for the launch of the new Prius, a green car and the first genuine hybrid car. “Our message was ‘For a Greener Tomorrow’. That message became stronger when we garnered the support of Al Ghad newspaper (its name translates as ‘tomorrow’), which changed its front page’s corporate colors from red and black to green. It was the first and only hijacking of a corporate identity of a daily newspaper for the sake of a brand,” she says.

Nurturing the digital scene. In fact, digital has become so important in Jordan that industries across the board are adjusting, shifting their work into digital.
Zafer Younis, co-founder and CEO of social media company, The Online Project, explains: “Jordan was one of the first countries in the region that had affordable access to the Internet without any censorship and one of the first countries in the region that welcomed social media advertising. Clients in Jordan have more understanding towards this platform than clients in Saudi Arabia, the UAE and other countries.”
Case in point, Jordan-based user-generated platform for marketing communications, advertising and media professionals, mediaME.com, has been organizing with growing success a yearly gathering for digital and traditional media clients and industry stakeholders: the mediaME Forum. The event’s purpose is to energize the digital media market through discussions on the latest online and mobile media tools, reviews of audience research results and lessons from best practices in the region and beyond.
Communicate Levant took part in the event’s fourth edition, held in Amman in March, under the theme: Digital Media #Trends. Delegates from traditional and digital broadcast media owners to media buyers, advertisers, content creators and others were present, addressing every aspect of business in the digital space. It’s at the forum that Jordan’s current advertising state was best summarized, by British ambassador for Jordan, Peter Millett – known as the diplomat who fires anyone who calls him “your excellency” – explained: “In Jordan, like the rest of the world, diplomacy is seen as a traditional profession, for different reasons; firstly, because we work with rigid structures; secondly, because people think that we work behind closed doors. However, like all other professions, we have to change to survive. The key elements of our job haven’t changed, but the tools at our disposal certainly have. If we don’t use Twitter and Facebook, we won’t be able to catch up with the new generations. Thus, today, the trending word in Jordan’s diplomacy is ‘Twiplomacy’, that merges traditional diplomacy with modern social media, mainly Twitter.”
Millett smartly finished his speech with the perfect quote by Henry Ford: “Change is inevitable. When you’re finished changing, you’re finished.”