Insights Industry
Back
The Changes In Media Consumption Around The World
By Arjun RKThu, Feb 25 2021
Contact

The new report by YouGov looks at the changes that happened in the way people consume media and the rise of the paid subscription economy. 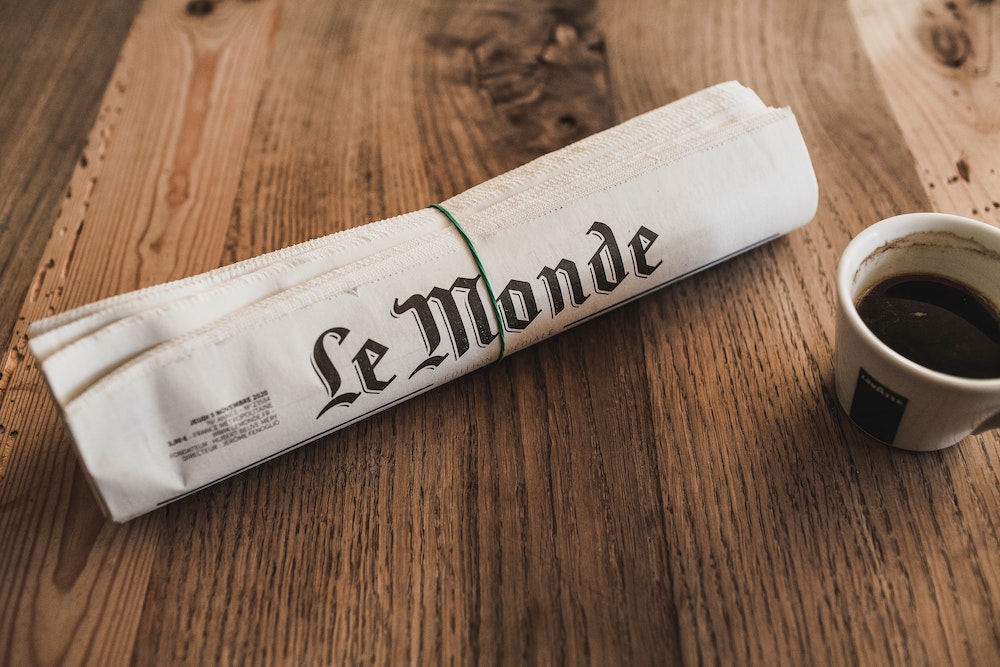 COVID-19 has disrupted the global media industry. As the pandemic ensued, many advertisers have paused or cut spending as their sales plunged. Other have furloughed staff in large numbers. In 2021, with the roll-out of vaccination drives across the globe, media landscapes in some countries are showing signs of returning to their pre-coronavirus state. But for others, the uncertainty remains. The new report by international market research firm, YouGov, explores international media, as the sector enters a pivotal time. The report surveys media consumption habits in 17 markets around the globe and tries to understand what changes took place in traditional media, digital media, advertising, subscriptions as a result of the impact of COVID-19.

The lockdown brought numerous changes in consumer's media consumption behavior and it's imperative for marketeers and advertisers to understand these changes, in order to strategize accordingly. Some mediums suffered massive blows in 2020, particularly mediums like print and outdoor. But while a medium like outdoor was partially redundant in 2020, 33% of consumers across multiple markets reported that they have seen a billboard or bus-stop poster in the past week. This means that the medium continues to have relevance as part of the broader marketing mix, even if it is possible that consumers are seeing fewer sites and that those sites are closer to home than ever. 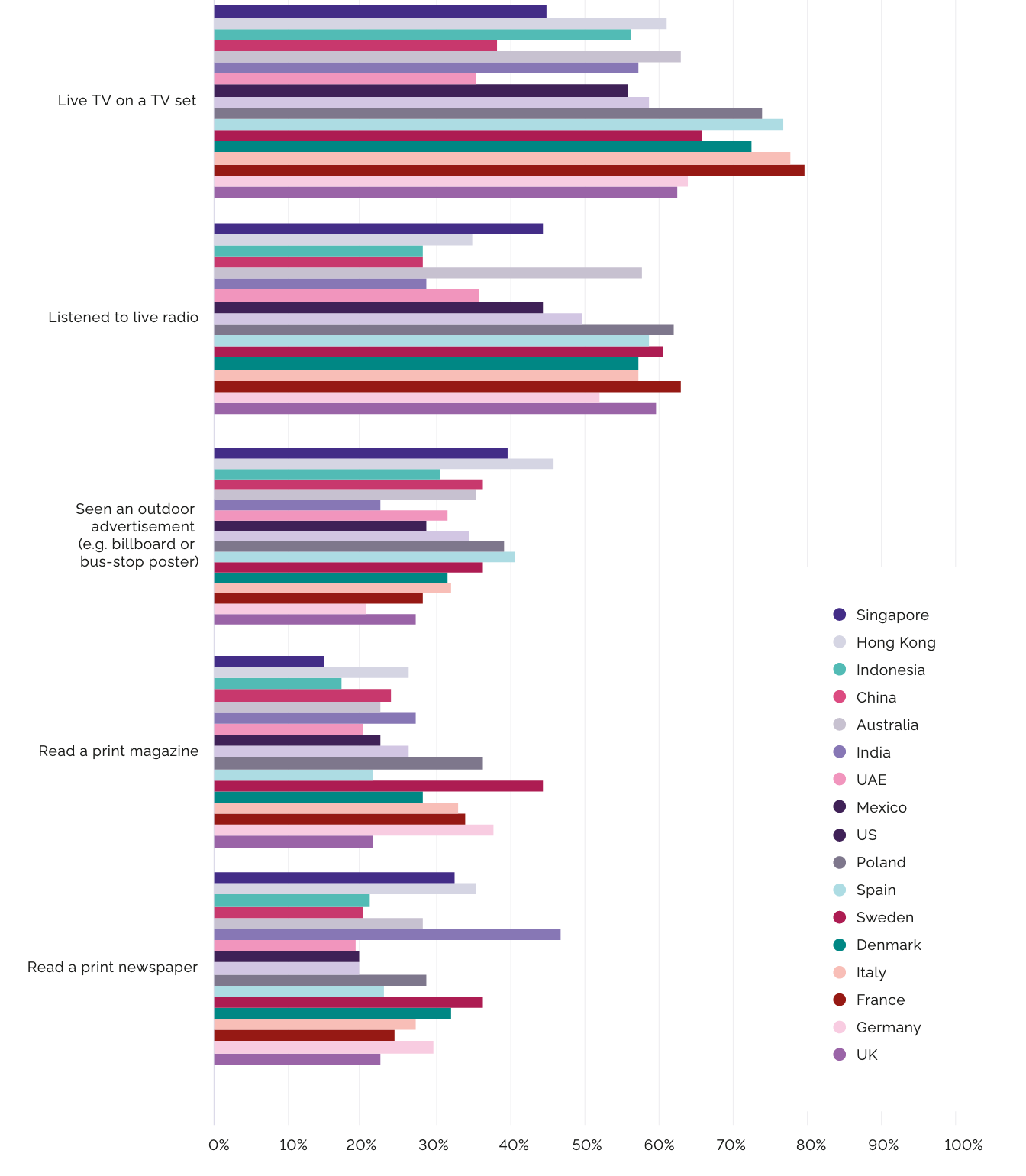 When global consumers were surveyed on about the kinds of traditional media they have used in the past week, live TV still dominates other formats. Across most of the 17 markets, over half of respondents consumed live TV, with the only exceptions being the UAE, Singapore, and China. In 2020, live radio stood as the second most commonly consumed traditional media format.

Among traditional media channels, TV was the most consumed medium (at 62%) by UAE residents in the week before the report asked this question. Radio (36%) and outdoor advertising (32%) followed next, but there is a considerable consumption gap between TV and the other two mediums.

Print sits in the middle of the international pack and is particularly popular in India. A similar state in Sweden, where 44% of people picked up a copy of a popular print publication. Following 2019 – when traditional media companies consolidated (such as Disney’s acquisition of 21st Century Fox) and launched their own streaming services in an attempt to compete with technology-based providers – 2020 was expected to be a significant year for digital media.

COVID-19 brought this into sharp focus, but perhaps not in the way many expected. With a pandemic keeping more people indoors than ever before, digital media occupied a place of major importance as a means of keeping the public informed more rapidly than they might have been via traditional media. It also provided entertainment at a time when some traditional forms were unavailable. 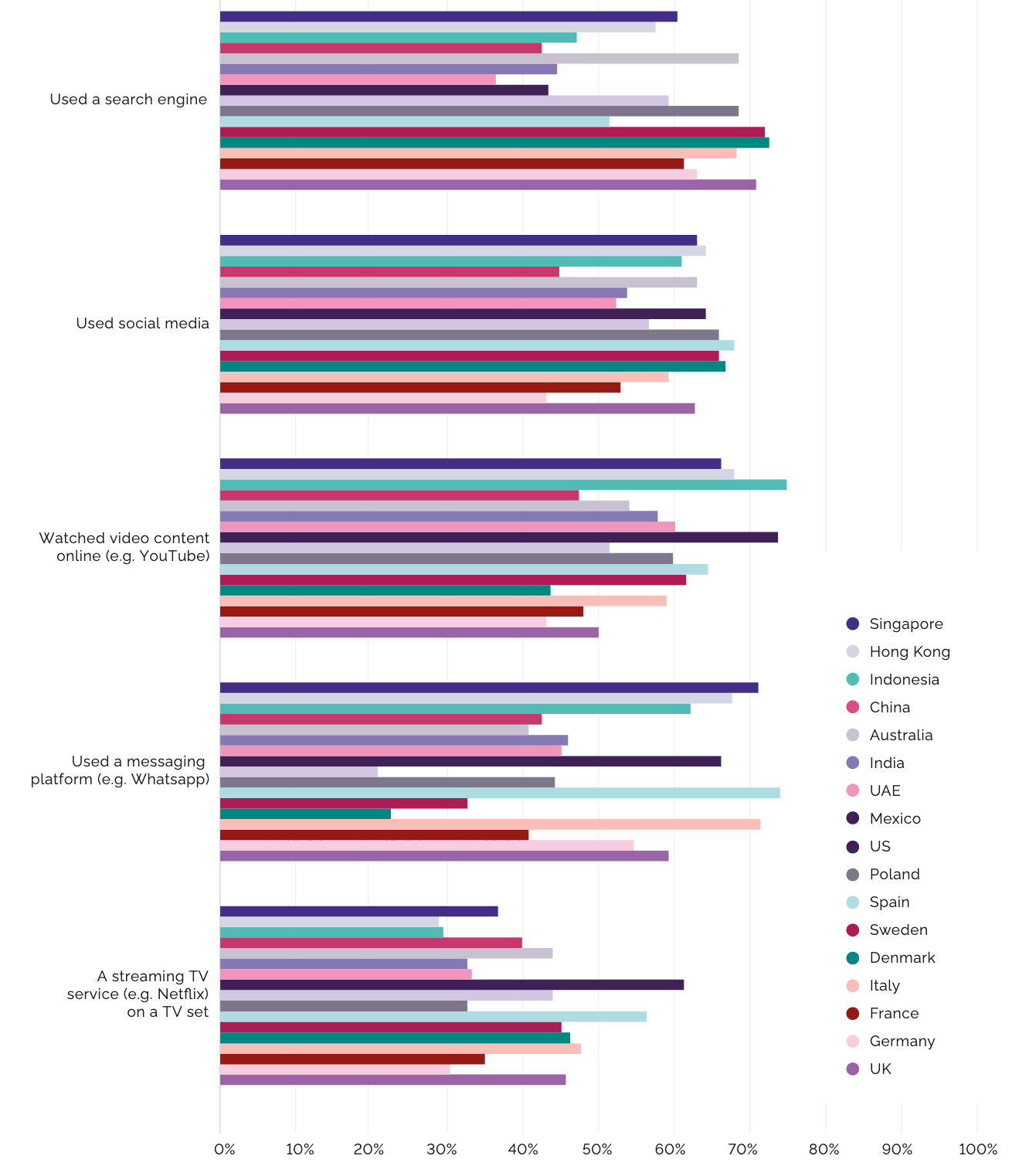 When survey respondents were asked on the digital media channels they used in the past week, a majority of respondents in most markets said they’d used a search engine, logged on to social media, or seen video content online. Large proportions also said they’d communicated via messaging services, viewed content-streaming platforms, or watched live TV on their phone, tablet, or computer. The data is not surprising, considering the long tenure of the lockdown last year, managed to create new habits among consumers. The key takeaway from this data is that even the less popular digital activities are now fairly commonplace.

When UAE consumers were asked about the digital media channels they used in the past week, most people (61%) claimed to have watched video content online, followed by social media (53%) and messaging platforms like WhatsApp (46%).  Two in five indulged with live TV on digital devices, and almost as many used search engines (40% and 37% respectively). The consumption of radio, podcasts and audio books remained lower than the other formats. 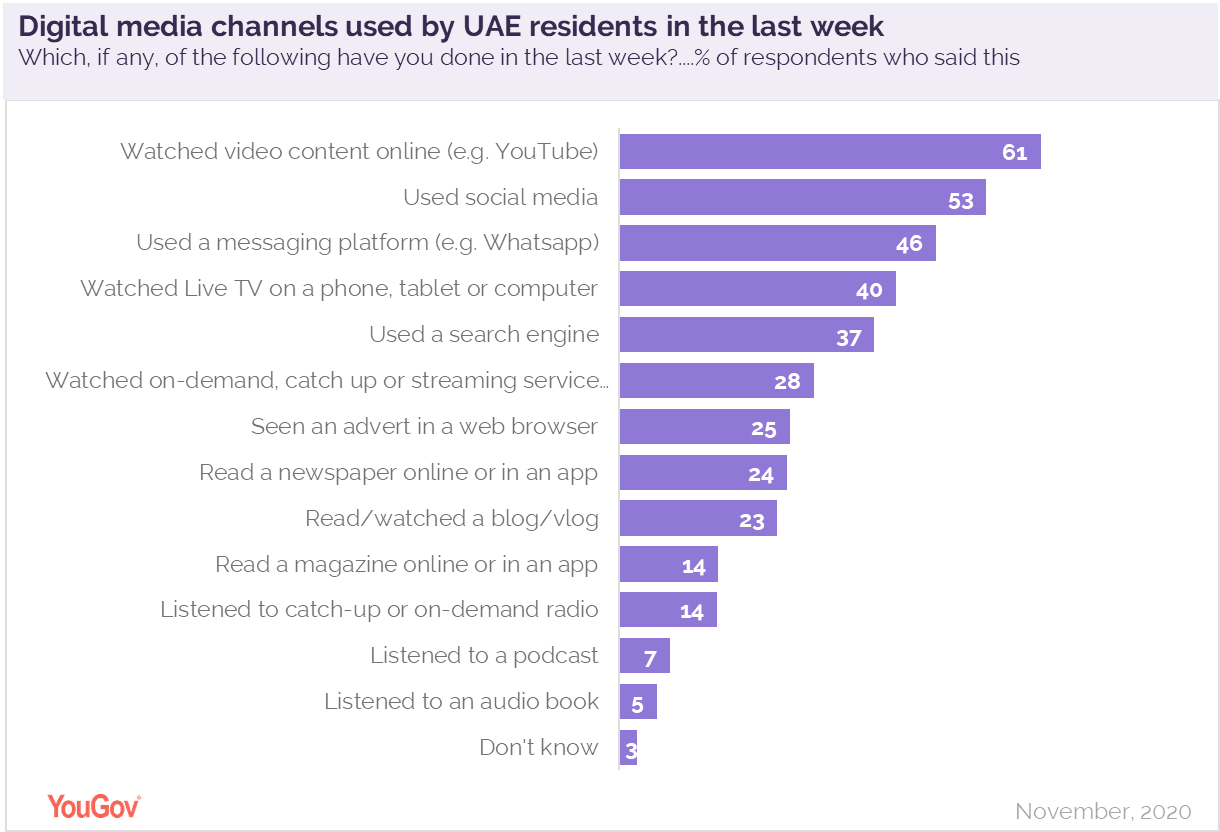 Nowadays, there's a subscription for almost anything from food, entertainment, pet-food, clothes, etc. Subscriptions have fundamentally altered global business and especially the media business. Yes, we're looking at you Netflix. The idea of paying a monthly fee for getting a diverse array of content has revolutionized the entertainment business. Legacy media institutions have turned to paywall-based business models for their web offerings in an attempt to recoup dwindling print and advertising revenues. However valuable the move towards subscription-based payment structures has been, it is worth exploring how viewers and readers feel about it: whether they prefer to pay with their wallets or their attention.

The common perception in the media business is that advertising is a pain point for consumers. The way it has been done for years in broadcasting is previewing a dramatic show and building up to a suspenseful moment only to cut it  with a commerical break. The viewer is so hooked that he/she will sit through the commercial just to find out what happens. And on top of that, consumers do not necessarily find these ads to be a problem. Data from the report shows that, when asked, most consider the bargain between consumers and advertisers – that people watch promotions in exchange for free content – to be essentially fair.

In the UAE, all age groups show a general acceptance towards viewing ads in exchange for free content, but the younger audiences (18-24 years) favour this trend the most (62%). 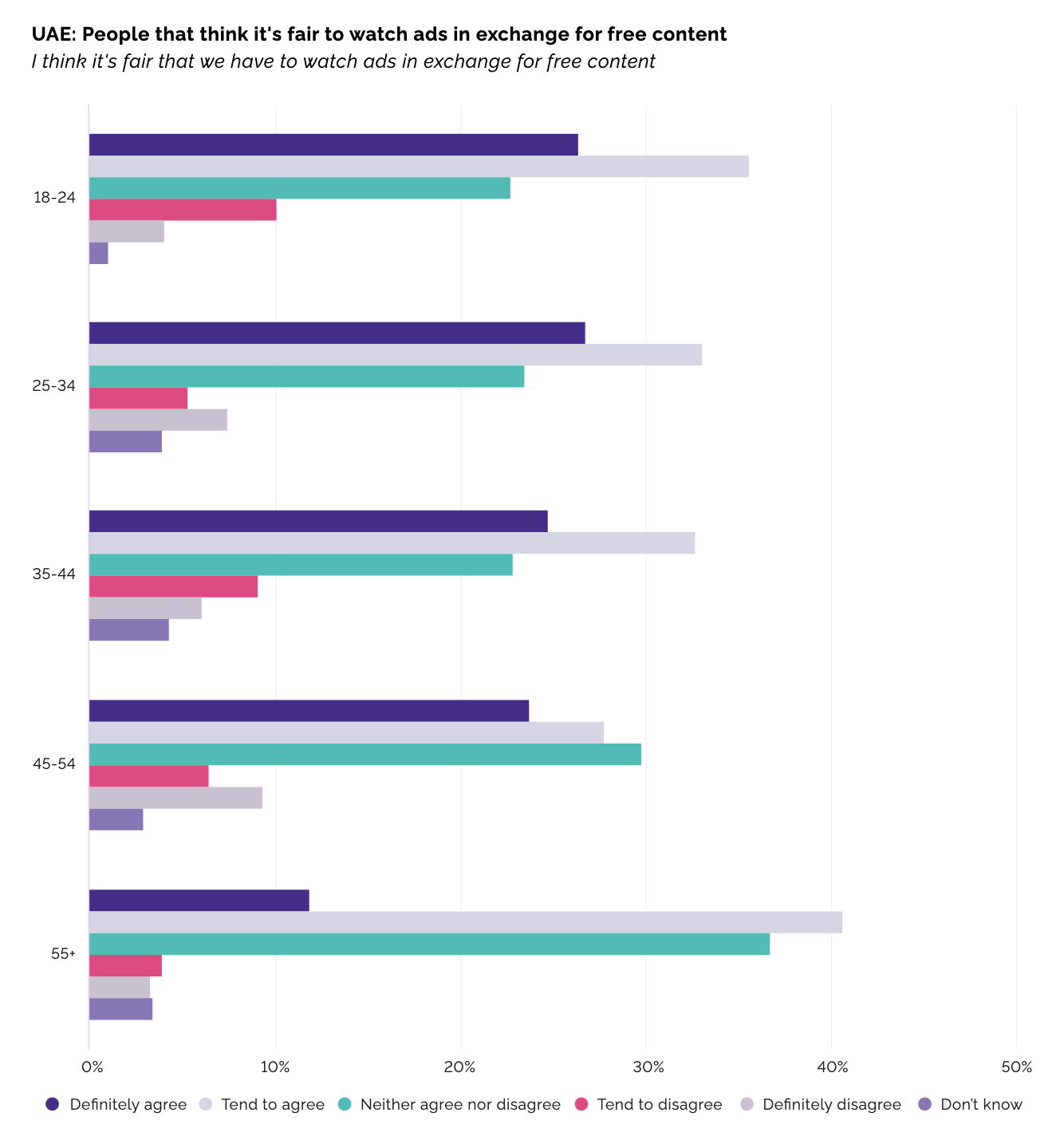 At a global level, Spain and Mexico are the top countries (65% each) where consumers are in support of this proposition. Whereas two Scandinavian countries, Sweden and Denmark, are most likely to dissent, but even in these markets, only around a quarter (27% Sweden; 23% Denmark) consider watching advertising in exchange for free content to be unfair.

Media subscriptions around the globe 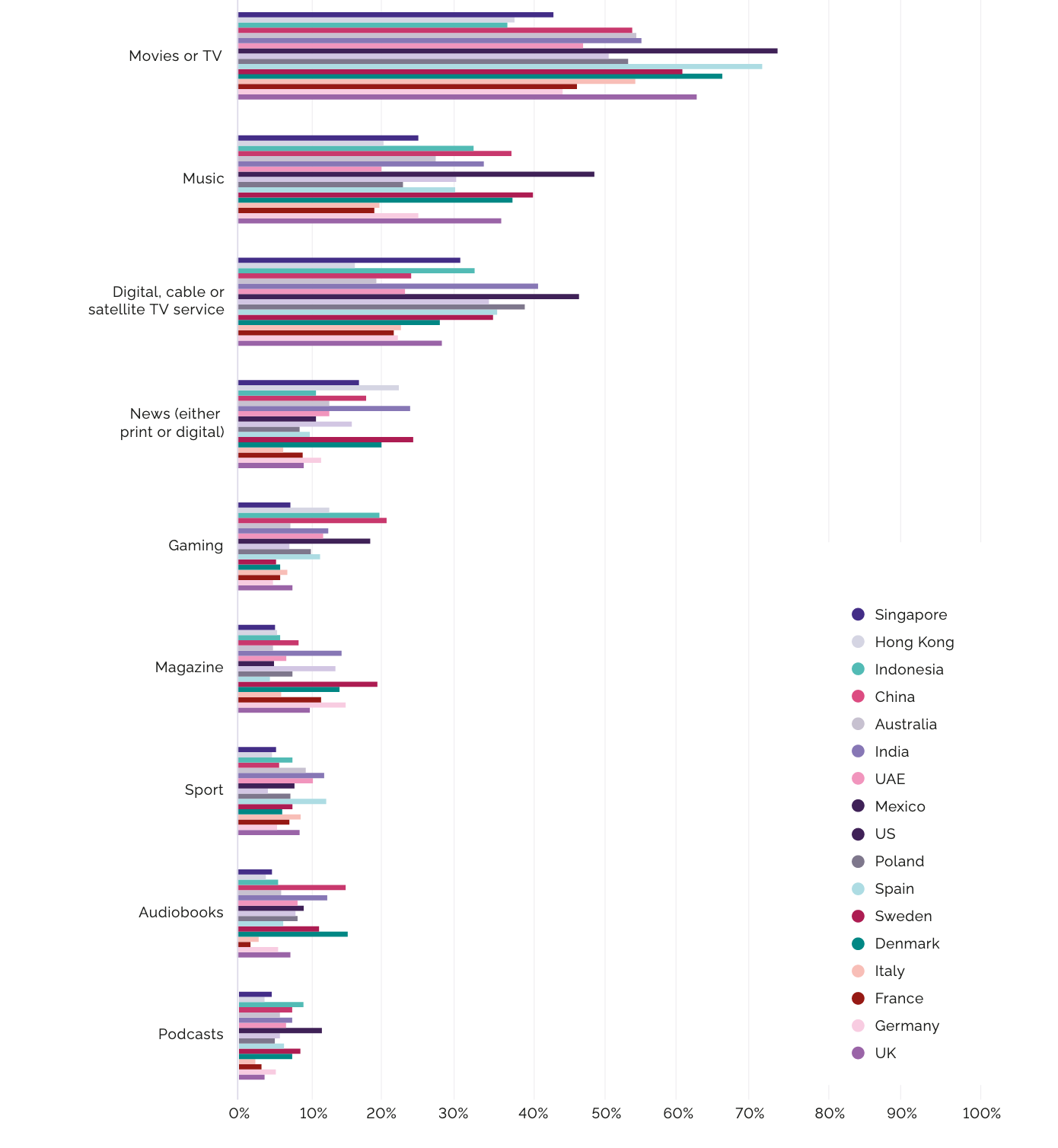 Film and TV subscriptions such as Netflix, AppleTV+ or HBO Max are the most popular by some distance in every market featured in the study and, in most, a majority of consumers has signed up to atleast one. Music streaming services such as Spotify and digital, cable, or satellite TV subscriptions alternate between second and third place depending on the market.

Data shows that, of those who have signed-up for a pay-monthly service in Great Britain, half (50%) are signed up to more than one; in the US, 46% have more than one service. An outright majority of consumers in the Scandinavian countries in our study are signed up to multiple platforms (58% Sweden; 56% Denmark). 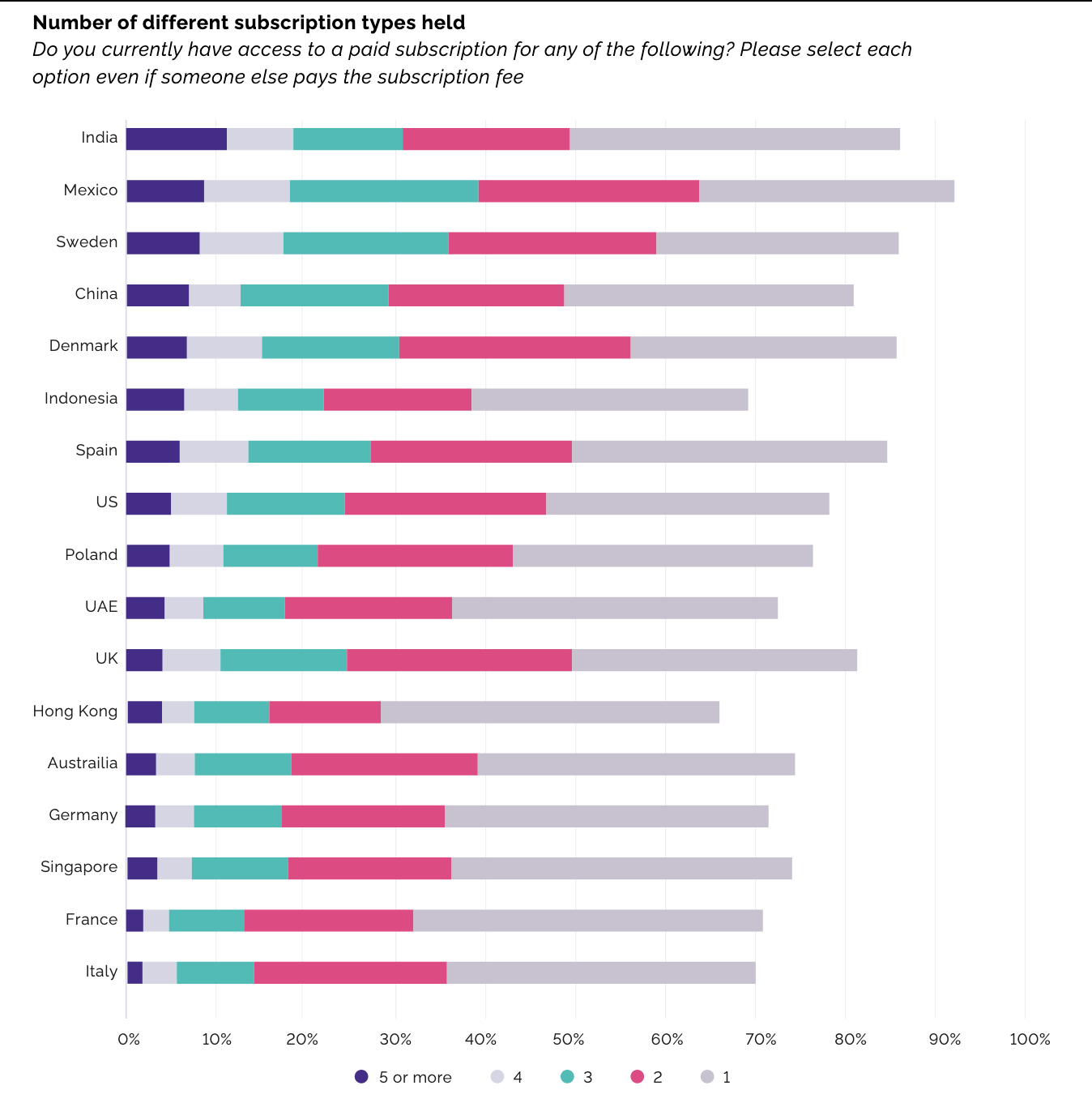 “COVID-19 has significantly impacted consumer behaviour and, in turn, media consumption habits globally. The data shows that although many people engaged  with digital media during the pandemic, several traditional mediums remained as relevant as before. Our data shows there are huge challenges for brands and advertisers looking to achieve ROI and effectively reach consumers in the right channels, at the right time, with the right message. Reliable, up-to-date insight can provide an early window into behaviour change to inform effective media planning and campaign development," said Julian Newby, Sector Head of Media at YouGov.