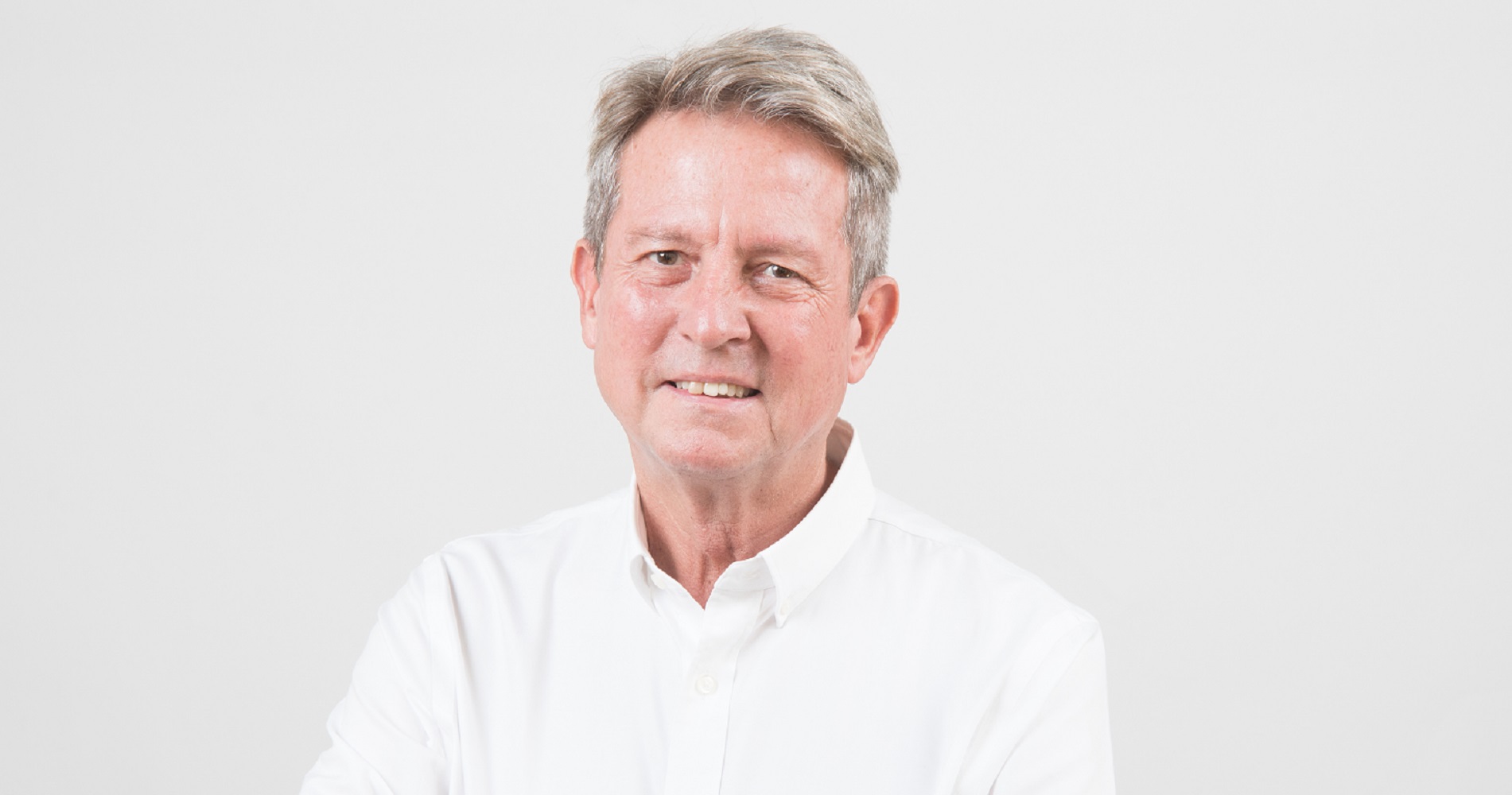 From cuneiform to the metaverse; where did it all begin and how will we communicate in the future?

Amidst the furor of what is billed as the largest show on earth, Expo 2020 Dubai offers a glimpse of a future, teasing audiences with tantalizing visions of a peaceful planet where its occupants live in harmony…

Perhaps the keyword there is “vision” as, regretfully, both the peaceful and harmony references remain as aspirational as trying to rescue humankind from the consequences of global warming. Add that to the spectacular and always intriguing history of the Middle East region, and you’ll understand why communications per se and the media in general play such a vital role in what happens next.

In looking at the challenge of condensing the evolution of media and its significant milestones into a few hundred words, I’ll caveat my contribution with a disclaimer; this is just part of the story. In the interests of brevity, this piece aims to engage those with a healthy interest in the media with some examples of what has shaped it so far, and perhaps where it's heading.

Recent history has shown us the power of what became known as alternative facts, but surely there is only one truth? Having met Sean Spicer, the one-time chief of comms to President Trump, I can tell you he puts forward a convincing interpretation on the subject.

Ironically at a time when binary options are unfashionable, the blurred lines of truth versus spin illustrate the world of grey that distorts reality and linear interpretation. What remains vital, therefore, is the need to interrogate what we see, read, or listen to, to compare sources and arrive at a balanced conclusion.

Today the soft powers’ battle for supremacy of language remains a work in progress, although English is emerging as the likely victor. Spoken by more than 500 million people as a first language and around 1 billion as a second, a country’s language policy is inextricably linked to both its foreign and economic policies. This is acutely relevant for young people in the Middle East. Without a gateway language like English, careers in engineering and commerce become increasingly challenging, stifling ambitions for economic diversification.

Anthropologists and philologists will tell you that language was just part of the deal. Years ago, we started to connect with one another through grunting, drawing, dancing, and using symbols (behaviors enthusiastically embraced by English football supporters). You could argue today that these methods are replaced by Emojis, TikTok, and Instagram, and countless other means, but fortunately language still offers the keys to sharing knowledge and human interaction. Written and spoken.

Indeed, there are many early examples in the Middle East. Evolving from graffiti of the pharaohs, AKA hieroglyphs (circa 3100BCE through 450CE), and another Near Eastern gift to communications, cuneiform (circa 3300BCE); symbols morphed into dialogue which in turn morphed into the written word.

All of this sets the scene for a closer look at how it all plays out in the Middle East, a region rich in culture and science, and, today, one of the most vibrant media environments on the planet.

The start of more conventional forms of mass media can be traced back to the early 19th century, largely as a consequence of colonial ambition. To ensure that communities were clear about the benefits of the empire and keeping on message (initially in Turkish, French, and English), the region’s earliest “newspapers” appeared in 1828. Al-Waqa’I al-Misiriyyah, an Ottoman newspaper is one example, with the first editions of the Arabic language Al Ahram appearing in 1875 in Egypt.

Many other examples are worthy of inclusion in the timeline, but undeniably, publishing and reporting news has always been a high-stakes business.

Commenting on the history of media in the Middle East isn’t possible without recognizing the huge contribution made by celebrated and often assassinated journalists, many of whom were casualties of intolerant and aggressive political agendas.

One of Lebanon’s oldest established newspapers, An Nahar, established in 1933 by Gebran Tueni, was later to be edited by his grandson and namesake. Much affected by politics in Syria, Tueni junior went into exile in France for his own safety. Upon his return to Beirut in 2005, he was ruthlessly killed by a car bomb.

Another obvious example is the murder of Jamal Khashoggi in 2017. This is much reported and not the subject of this piece, but illustrative of how a media dynasty can fall foul of extreme and often extraneous circumstances.

What is less well known today is that Jamal Khashoggi’s aunt was Samira Khashoggi, a progressive Saudi author and editor-in-chief of Al Sharkiah magazine. She was also the first wife to the one-time owner of Harrods, Egyptian-born Mohammed Al Fayed, the sister of Saudi billionaire-businessman Adnan Khashoggi, and the mother of filmmaker Dodi Fayed, who was killed in a car crash in Paris in 1997 along with Princess Diana.

This web of intrigue thickens; when Adnan Khashoggi’s fortunes ebbed, he had to sell his legendary mega-yacht Nabila, eventually becoming under the command of the commander-in-chief himself, Donald Trump, re-branding it the Trump Princess.

This hall of fame goes further and can link media events in the Middle East during the late eighties with the CIA; notably, Mohamed Ali’s fixer Larry Kolb, who married the daughter of Soraya Khashoggi, Kim – half-sister to Nabila.

Returning to the central theme, the relationship between Middle Eastern media and its history is clear. We have plotted a timeline graphic which better illustrates this point, but a handful of recent examples are particularly noteworthy. 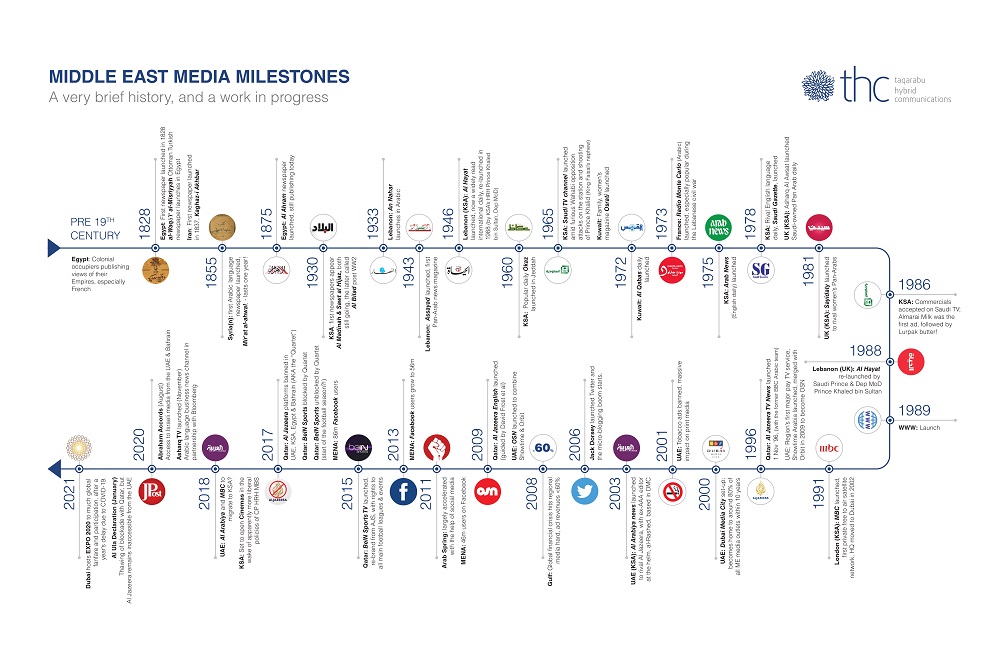 Print media. As referenced, the printed word has been a constant throughout Middle Eastern history, reporting on everything from the opening of the Suez Canal in 1869 to the invasion of Kuwait in 1990. Perhaps unrecognizable today by the media barons of old, most have embraced new formats to engage with increasingly mobile audiences.

Radio. The go-to source for news, numerous Arabic-language channels have served the Middle East, but probably the most significant was Radio Monte Carlo, broadcasting from Paris from 1972, especially valued during the civil war in Lebanon.

Satellite TV news. The birth and success of CNN can be traced back to the first Gulf war in 1990 (without this event and the legendary reporting of Wolf Blitzer, along with the evolution of satellite technology, the channel would have taken much longer to gain audiences and global traction). It also gave rise to the formation of Al Jazeera in 1996, borne out of the wholesale redundancies at BBC Arabic service.

WWW. Initially road-tested in 1989, it became publicly available about four years later developing into the generic “Internet” (not necessarily what Tim Berners-Lee had intended, but its ubiquitous evolution has had a massive effect on the Middle East with hundreds of media channels opting for online editions).

Social media. This accelerated the effects of the 2010 Arab Spring (which, arguably, would have happened anyway, overwhelmingly linked to the region’s demographics and disenfranchised youth, but Facebook was a key enabler of sentiment).

So, what of the future and what of the metaverse? My view on the preceding is that quality, well-thought-out, and creative content will prevail over the white noise of too often sponsored online opinion. Unless you believe this, then what can you believe in?

If Zuckerberg’s rebranding of Facebook into “Meta” (by definition, “a hypothesized iteration of the Internet”) was meant “to better encompass what it does as it broadens its reach beyond social media”, then we will have our work cut out to separate fact from augmented reality. Or is that just another alternative fact?