Insights Culture
Back
Let's Experience… Something… Together
By Arjun RKSun, Nov 01 2020
Contact

Communicate explores the world of ASMR, one of the Internet’s strangest audio-based trends, and looks at how brands are cashing in on it.

The Internet has given birth to many quirky new career opportunities, and a time when audio is the next big thing, it’s almost no wonder that one such option involves making a living by tapping, scratching, whispering, brushing and lip-smacking in front of a microphone. Believe it or not, that strange activity amasses millions of views every day. Welcome to the not-so-secret cult of ASMR.

Autonomous sensory meridian response, or ASMR, is a relaxing, often sedative sensation triggered by placid sights and sounds such as whispers, accents, and crackles. The term was coined in 2010 and is currently one of the most popular sub-genres on YouTube, garnering more than 13 million searches worldwide. 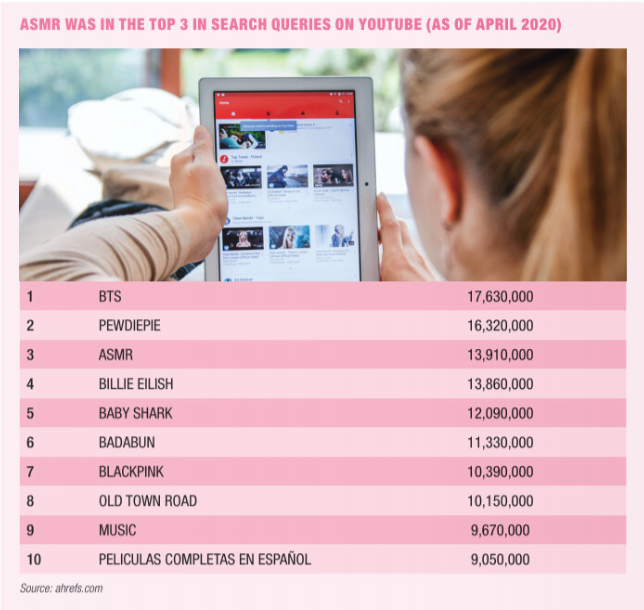 A brief history of ASMR

The story began in the early 2000s when Jennifer Allen, a mere online forum dweller, realized she was feeling a peculiar tingling sensation whenever she was watching videos of space. Unfortunately, searching Google to find an explanation for these sensations yielded no result until 2009, when she finally landed on a post on the SteadyHealth message board. Allen was relieved to find others describing the exact same experience. However, defining it as a “tingling sensation” or “brain tickle” didn’t sound as a legitimate or credible enough way to generate the scientific attention she thought it deserved. Hence the “autonomous sensory meridian response” label she came up with, debuting it on the SteadyHealth board and creating the ASMR Group on Facebook

As journalist Jamie Lauren Keiles explained in a 2019 New York Times story, Allen chose “autonomous” because it is a feeling from within; “sensory” because, well, it is; “meridian” because it works triple duty, suggesting peak but also orgasm and the energy pathways of traditional Chinese medicine; and “response” because it is not a constant state and happens in reaction to a set of stimuli.

Soon enough, the word began to spread and Facebook memberships to the ASMR group skyrocketed across the world. Simultaneously, a new breed of YouTube creators, known as ASMRtists, started dedicating their time towards creating content that triggered these sensations.

ASMR’s cultural appeal supersedes the scientific understanding of it. Indeed, researchers are yet to fully understand what exactly causes these sensations and why not everyone feels them. To date, only ten peer-reviewed studies have been published around ASMR, according to data from the ASMR University, an online archive created by professor of physiology at Shenandoah University Craig Richard. But celebrities have jumped the bandwagon, starting with Eva Longoria in 2016 in classic ASMR fashion, and Jake Gyllenhaal in an epic 2017 interview.

Today, ASMRtists have raked up massive following.  GentleWhispering, for example, boasts 1.93 million followers on YouTube. With such massive growth in the ASMR community, it was only a matter of time before brands started exploring the trend.

How are brands using ASMR?

Interestingly, some marketeers have created ASMR “campaigns” without even realizing it. Popular chips brand Pringles, for example, cashed in on the trend before it was even a trend, back in 1996, with ads that made use of rhythmic tapping, popping, and crunching sounds –  which helped Pringles establish a distinctive audio identity.

On the other hand, in 2017, Ikea and advertising agency Ogilvy and Mather New York launched a six-videos advertising series titled “Oddly IKEA,” openly describing itself as ASMR and providing the typical narrator-based, intimate one-on-one experience. The narrator subtly shifts listeners’ attention to the products, inviting them to listen to the sound of bed sheets, cushions, closet organizers and other products in the room.

The video became a viral sensation and has amassed almost three million views as of now, supported by a very engaged community of ASMR online advocates. What’s more, Ikea saw a 4.5% increase in in-store sales and a 5.1% increase in online sales, Kerri Homsher, a media specialist for IKEA USA, told the BBC.

The ultimate proof that ASMR really entered the mainstream, however, was a Michelob Ultra ad for its new Pure Gold light beer during the 2019 Super Bowl – the most-watched TV event of the year in the US. The commercial featured actress Zoe Kravitz whispering and gently drumming her fingers on a bottle while sitting in the middle of a Hawaiian rainforest. “We felt that it would be amazing for the most natural brand to try to give hundreds of millions of people in America 45 seconds of a pure organic experience, during a moment where everything is so loud and every commercial is in your face. We wanted to give them a break from all of that,” Fred Levron, Worldwide Creative Partner at FCB Global, told Rolling Stone, while Azania Andrews, VP of Marketing for Michelob Ultra, said sales volume for the beer grew in the triple digits following the airing of the ad.

The interest around ASMR is at a very nascent stage in the region. YouTube creators such as Rola Embabi, Arabian ASMR and Arabian Whispers ASMR are leading the way, but remain far behind the massive numbers seen abroad.

Still, in 2016, Dr. Franziska Apprich, a former assistant professor at the School of Communication and Media Studies at Canadian University Dubai, released a paper on “The Impact of ASMR on the Social Media Generation,” looking at how ASMR could have a calming effect in a social media-dominated world. The study earned her the Outstanding Scientist Award at the Venus International Foundation Research Awards in India.

In July 2019, Cosmopolitan Middle East launched “Hamsa 3arabiya” (“Whispers of Arabia” in Arabic), a new Arabic Snapchat series featuring ASMR beauty tutorials and product reviews. And on the commercial front, a handful of brands have been experimenting with ASMR in Arabic for marketing purposes. Most notably, for the launch of its new Crunchy Chicken Fillet, Burger King rolled out an unusual campaign in 2019 where all the focus was put on an ultra-realistic ASMR rendition of the food crunching, designed to amplify the sensations. The 45-second cinema spot, created by J. Walter Thompson KSA with sound design by The Brain Studio’s Elie Akl, used the new 7.1 Dolby Surround Sound to provide a more immersive experience and was released in eight Vox cinemas.

As the popularity around ASMR continues to grow globally and regionally, we can expect more brands to leverage the trend in their campaigns and collaborate with the region’s growing pool of ASMRtists. Keep your ears peeled.

This article was published in Communicate’s Q3 edition. You can access the full magazine here 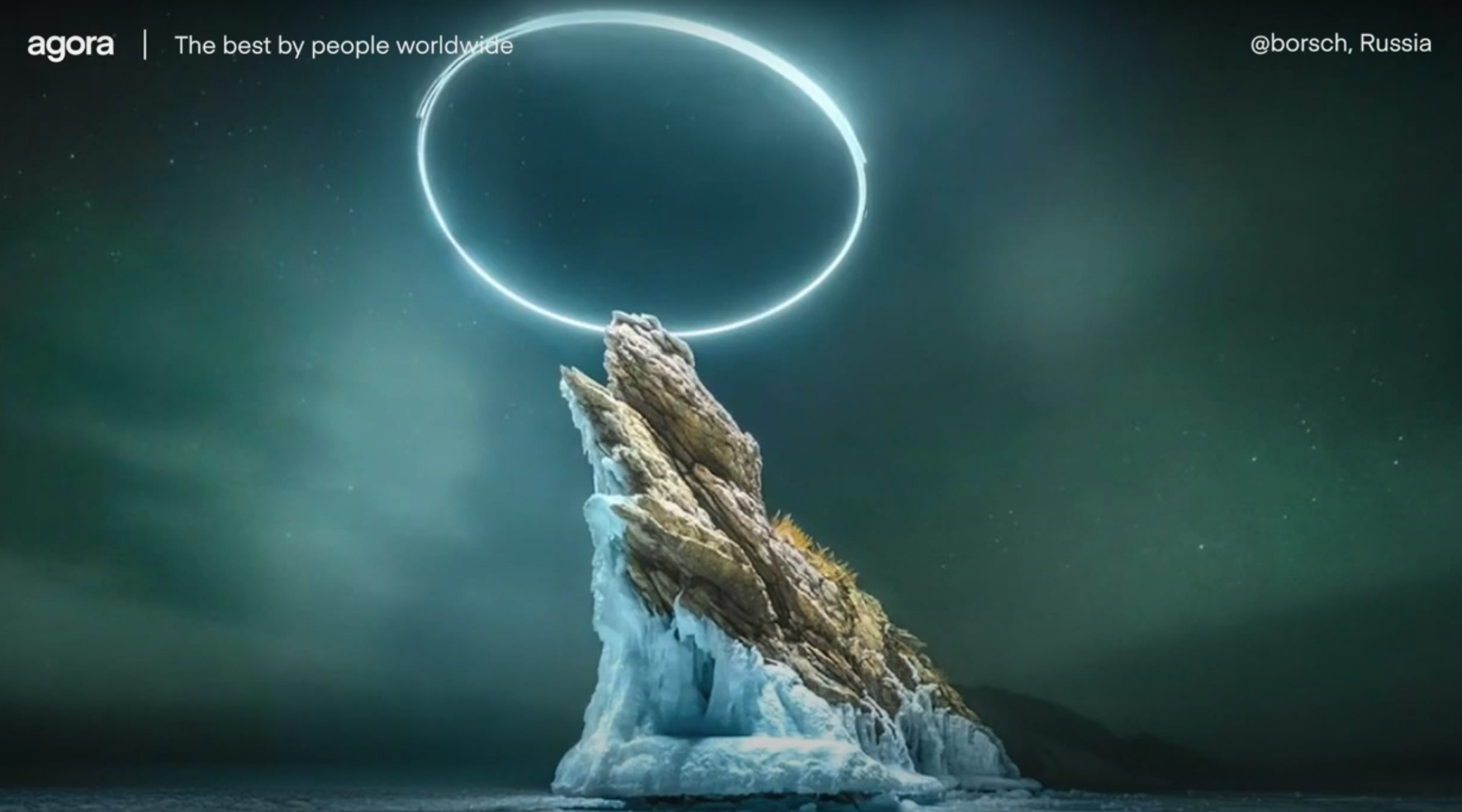 The world comes alive at night, all you need is a little light! Be inspired by these night photography ideas from some of the Finalists from Agora’s #NightLight2020 contest. Agora images are a free-to-use app social app. The app is for the global photography community, with more than 3.5 million users from across 193 countries. On a […]