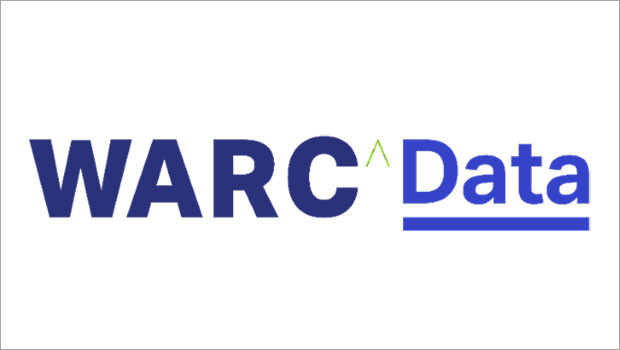 According to the report released by the international marketing intelligence service, global advertising spend is set to rise by 7.1% to $660bn this year, guided by a 13.2% growth in internet investment. Quadrennial events such as the US presidential elections and the Summer Olympic games in Tokyo are expected to help TV spend to rise by 2.5% to $192.6bn.

“Internet ad growth has been far stronger than the state of the global economy would suggest, rising seven times faster on average since 2015. But, regulation aside, online platforms are bound by the law of large numbers, and revenue growth is easing for key players like Alphabet and Facebook,” says James Mcdonald, managing editor at WARC Data and author of the research.

Advertising’s share of global output is rising steadily due entirely to increasing investment in online formats which, taken together, are approaching half a percent of all economic activity worldwide. Historically, advertising investment’s relationship with GDP has been strong, recording a value of 0.74 since 2000. But this began to decline and may weaken further in the short-term, as internet formats continue to emerge as the dominant ad channels. Internet ad growth has been far stronger than the state of the global economy would suggest, rising seven times faster on average since 2010.

“We are yet to amend our forecasts in light of the COVID-19 situation, as we would expect – if the crisis is contained – displaced spend to be reallocated later in the year. Advertising’s relationship with GDP is strong, but a slowdown in economic output- as a result of the virus will not necessarily translate into reduced advertising investment. If events such as the Tokyo Olympics and UEFA Euro 2020 tournament are postponed or canceled, however, we would expect a notable impact,” according to Mcdonald.

Trends by media and format

Out of home: Spend across billboards, transport and retail/point of sale (PoS) locations are forecast to rise 5.9% to $43.5bn this year, the sixth consecutive year of growth. The sector is benefitting from the increasing penetration of digital sites in advanced markets.

Print: Spend is set to fall by $3.2bn, or 5.8% in 2020, but this is half the rate of decline recorded in 2019. Digital revenue now accounts for over a third of total ad income for publishers worldwide, though this share is closer to a half at the New York Times.

Alphabet: Alphabet’s advertising revenue across Google Search, YouTube, and Google Network Members (third parties that host Google ads) is forecast to rise 10.5% to $149bn this year — 22.6% of global advertising spend (up from 21.9% in 2019).

Amazon: Amazon is forecast to record double-digit ad revenue growth again this year, with income amounting to $17.1bn, a 21.4% rise from 2019. This gives Amazon a 2.6% share of global advertising spend.

Twitter: Twitter’s ad income is expected to ease into single digits, with a total of $3.3bn representative of a 9.2% rise in 2020.

Trends in the Middle East region 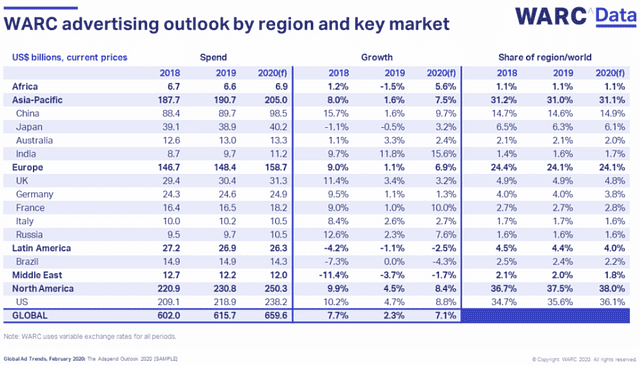