What to Expect from Privacy Sandbox Testing
Insights Industry
Back

Chrome is starting the next stage of testing for the Privacy Sandbox ads relevance and measurement proposals.

Starting today, developers can begin testing globally the Topics, FLEDGE, and Attribution Reporting APIs in the Canary version of Chrome. Google progresses to a limited number of Chrome Beta users as soon as possible. Once things are working smoothly in Beta, API testing will available in the stable version of Chrome to expand testing to more Chrome users.

Google recognizes that developers will need some time to use the APIs, validate the data flow, and measure performance. The search engine is looking looking forward to companies providing feedback as they move through the different testing phases, which will allow to continually improve the APIs. Once the APIs are working as designed, they'll make them broadly available in Chrome, allowing more developers to integrate, evaluate and provide feedback as we continue to optimize them for their use cases.

Developers can expect support from Chrome in the form of developer guidance, regular updates, and a range of feedback and engagement channels. Google encourages developers to share feedback publicly and with Chrome, and the progress will be closely monitored along the way. Google also welcomes the role industry associations can play in this process, from facilitating collaborative industry tests to aggregating feedback themes.

Chrome will also begin testing updated Privacy Sandbox settings and controls that allow users to see and manage the interests associated with them, or turn off the trials entirely. 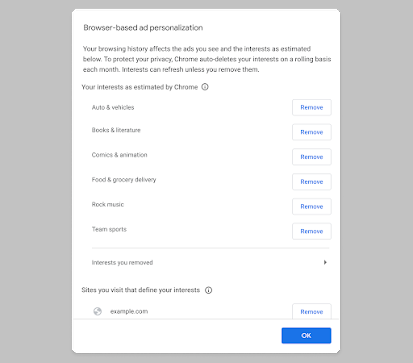 Chrome will be testing updated Privacy Sandbox settings and controls.

The Privacy Sandbox proposals have already benefited substantially from the thoughtful feedback of early testers, and  Google looks forward to opening up testing for more proposals. Google will continue to gather feedback from the ecosystem and engage with regulators globally, including through work with the UK’s Competition and Markets Authority in line with the commitments for the Privacy Sandbox on the web. If you’re interested in learning more about the APIs and how you can participate, please see our detailed developer guidance.

The original article was published by Google on their Chromium Blog