What Happens When Technology And Art Come Together?
Insights People
Back

What Happens When Technology And Art Come Together?

Communicate speaks with the visionaries behind Google Arts and Culture's latest project - The Art and Soul of Mosul, to learn how technology played a role in bringing the project to life. 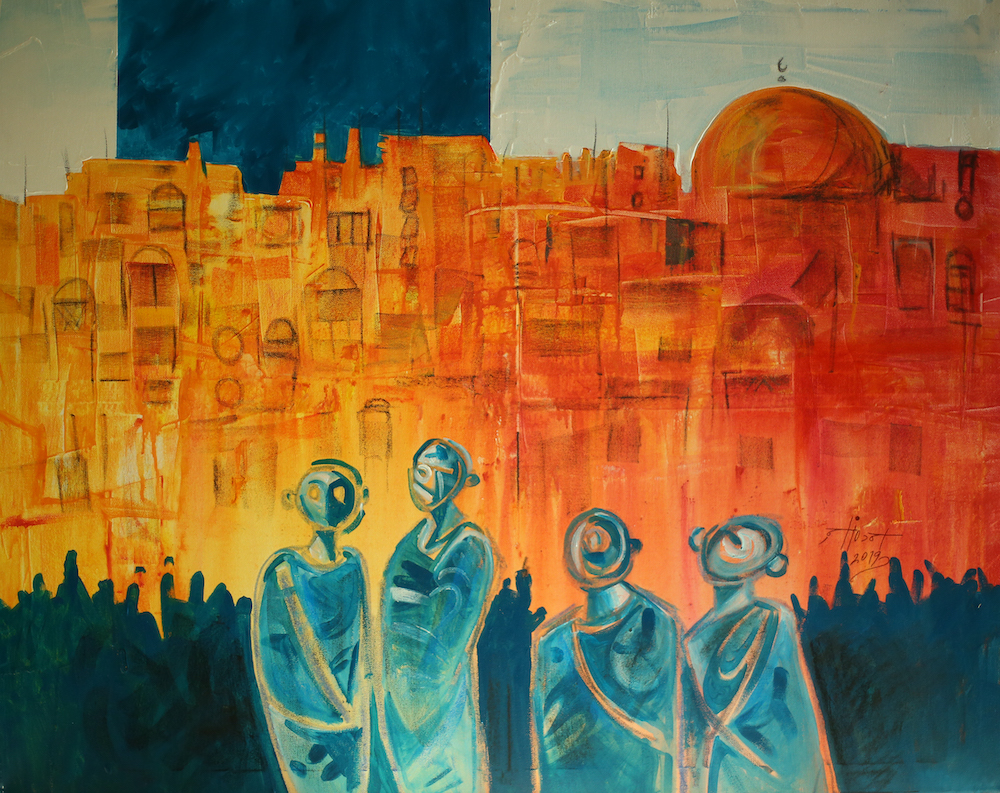 Last month, Google and Al Ghad radio launched The Art and Soul of Mosul project to help preserve Maslawi cultural landmarks using technology. Communicate spoke with Chance Coughenour, Head of Preservation at Google Arts and Culture and artists - Hakam Al-Kateb and Faihaa Al-Agha, to learn more about the inspiration behind the project and how technology plays a role in creating art today.

What was the inspiration behind pursuing this project? How did it come together? 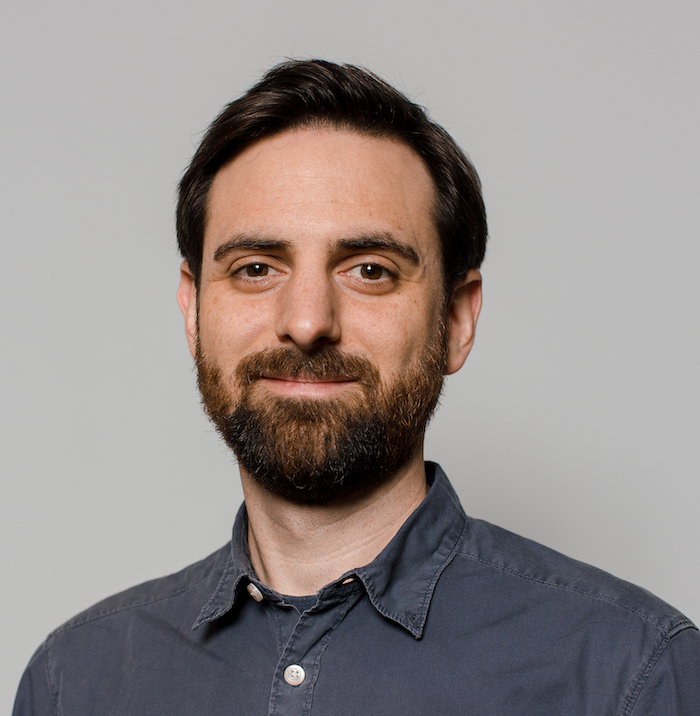 Mosul’s unique cultural history extends over 4000 years, and has witnessed the rise of civilizations but experienced struggles, some of which led to the destruction of some of humanity’s oldest cultural treasures. To help shed light on these treasures, in 2019, we worked with local community radio station Al Ghad Radio, the State Board of Antiquities of Iraq , the Department of Antiquities and Heritage of Nineveh and others to help share the city’s strong cultural influences and to tell the stories of Maslawis through the eyes of their artists.

Today, we’re excited to be able to help give the exhibition a permanent, online home and to help preserve destroyed cultural landmarks such as the Nuri Complex and to help local artists share their art and the beautiful culture with the world online on Google Arts and Culture. “The Art & Soul of Mosul” shows everyone the powerful and colourful voices of Mosul’s artists, many of whom witnessed and lived through the ISIS occupation of Mosul. The exhibition features artworks from the local community and 3D prints of priceless destroyed heritage such as the Lion of Mosul and the AlHadbaa Minaret. 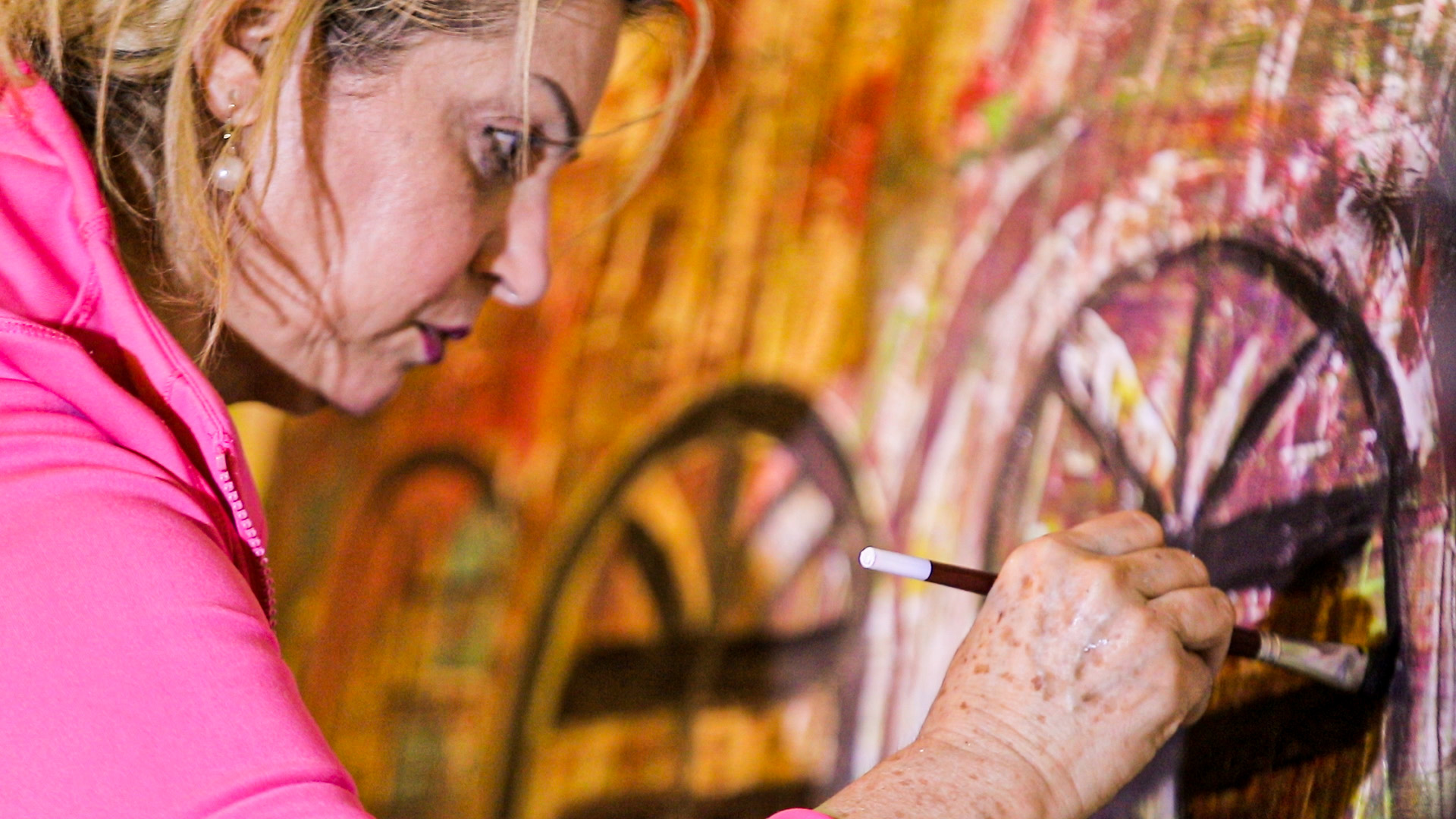 After the great destruction of Mosul, I’ve always wanted to document what occurred in the city through constant attempts to portray the present, past and future of the city through art. My goal was to tell our story and show people's feelings by using a unified language which everyone could understand, and that is through art.

I still clearly remember the day when our collaboration started with AlGhad Radio. From that moment, we approached local artists in Mosul and other areas in Iraq who helped us create art that represents the city. Our mission was to give this project a colorful touch using a language that everyone can understand across the region and the world. The series of events allowed the return of Mosul to be a great exhibition with the launch of the Art and Soul of Mosul project. This project is definitely a dream come true. 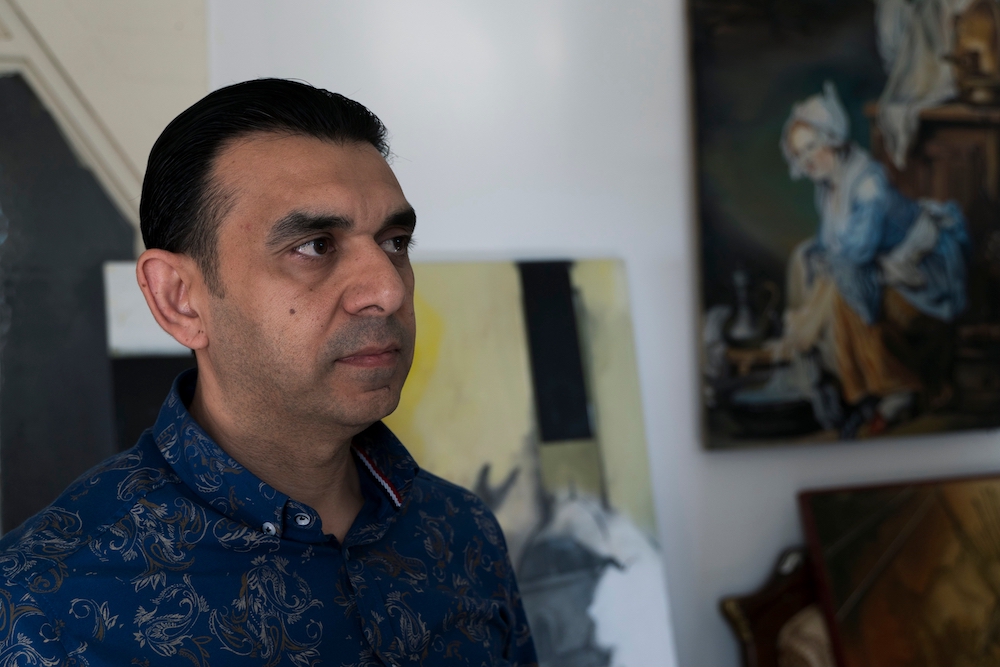 It was necessary to convey the voice of the city and its people to the world in one way or another, especially as the city had gone through difficult times. Back in 2019, AlGhad Radio reached out to the Mosul branch of the Iraqi Fine Arts Society, through Dr. Khalif Mahmoud the Society’s President, and hosted a large artistic event, the “Return of Mosul Exhibition” that had wide reach. The exhibition was held on 1-28-2019, in the historic Royal Hall of Mosul Museum, a museum that saw one of the most heinous criminal acts against civilization and heritage in modern history during which most of the Assyrian sculptures and valuables were destroyed.

The exhibition carried strong messages that Mosul might get sick but never die. It reflected the true image of the city that always rises from the rubble like a phoenix from the ashes, overcoming its wounds and flying high. I believe this message was communicated through “The Art & Soul of Mosul” exhibition on Google Arts & Culture, which was launched on 28 Jan 2021 to coincide with the second anniversary of the ‘'Return to Mosul' Exhibition

Could you talk a little bit about the technology that's being used in the project?

CC : Google Arts & Culture has been a technology partner for the cultural sector since 2011 and we've been working to put the latest technology to work for the benefit of culture. Over the last 20 years, advancements in 3D technology have made it possible to record cultural objects and buildings at a high level of precision, which offers experts a digital copy to explore, study and share more easily. There are different types of technology that makes this possible (ie, photogrammetry and laser scanning).

For the Art & Soul of Mosul, Google Arts & Culture also used high-quality scanning to create in-painting tours so people can get "up close & personal" with the artists' stories in their artwork and see minute details of the artwork. Al Ghad used technology to help preserve the El Hadbaa Minaret (3D model), the Church of St. Thomas (3D model), a niche inside the Nuri Mosque (3D model) and the Lion of Mosul (3D model). There are also a 360 degree video giving you a full view of historical landmarks as well as Street View tours to help people discover Mosul virtually.

Are more artists beginning to use technology to help express their art? Could you share some experiences on what that process was like?

FA: Every artist has a vision of how to communicate their ideas and goals, some do it through paintings and woodwork, while others tend to use their imagination. For instance, we know that technology plays a big role in an artist's piece. Using new technologies, we were able to visualize destroyed cities from various angles and that really inspired us to use our imagination to paint something that is longer there.

Many artists are also using technology in different ways. For example, technology can help artists design their paintings or even create sculptures. With VR and 3D technologies, I believe the art scenes will develop even further and huge leaps will be possible in the future.

HK: We most certainly live in a time of advanced technology with rapid transfer of information through social media platforms, cross-cultural exchange as well as the exchange of ideas and experiences. Art by its nature is about experimentation, discovery, and going beyond the material by raising topics that have not been raised before. This is what grasps the viewers’ attention and drives them to “search'' once again.

We also realized that creativity goes hand in hand with modernity, which allows us to create a new unconventional environment. As we looked at the public and their stereotypical vision, we realized it's not close to the tangible reality, nor is it a topic of discussion. Today, technology imposes itself on us strongly, and artists are keen to adopt it to shed light on their works. Through these unprecedented times, we know that the pandemic made it difficult to bring people together, however, through digital technology, we’re able to showcase and display art works through platforms like Google Arts & Culture to help elevate one’s experience. This project has played a great role in showcasing art to the world in a manner that should encourage artists to do so more often.

What do you hope to achieve with the project?

CC: By bringing artworks and stories of Mosul online we hope to give everyone access to the story of the city and its people, their resilience and perseverance to rebuild their community, beyond the headlines of gloom and despair. We also believe in the importance of helping to preserve Mosulian heritage for future generations after many cultural landmarks and artefacts were destroyed such as the Lion of Mosul and the Al-Nuri Complex.

FA: I hope to deliver one important message to the world: that Mosul is a city that might look weak but does not die. I hope that people can take some time to discover the city of Mosul and become more aware of what it’s been through and what is currently happening on the ground. But most importantly, I want our audience to get to know this historic city and see an alternative type of art they might have not seen before from this city.

The culture of the Middle East varies from one area to the other and Mosul is a diverse city, with a lot to give and I hope that one day it will become a destination for artists from around the world.

HK: Express our ideas and topics by establishing relationships with artists from different backgrounds to learn about their experiences and pass on our culture to them. I look forward to seeing future projects like this one be represented in the field of sculpting, photography and graphic design. Through these exhibitions, we can then look into exchanging lectures, organizing joint workshops and maybe even schedule visits to international museums, such as the Louvre in Paris or The Hermitage Museum in Saint Petersburg, Russia. 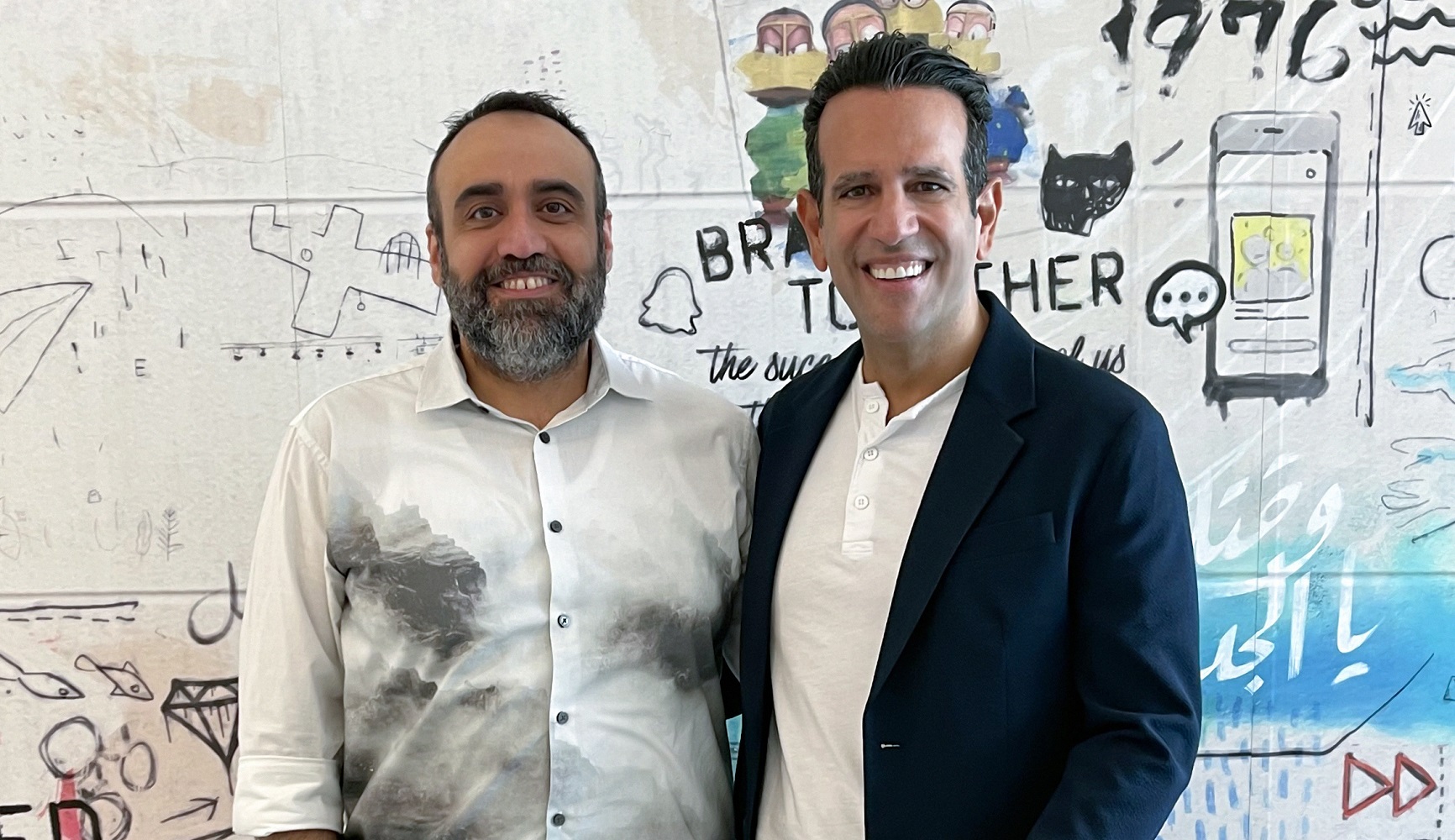