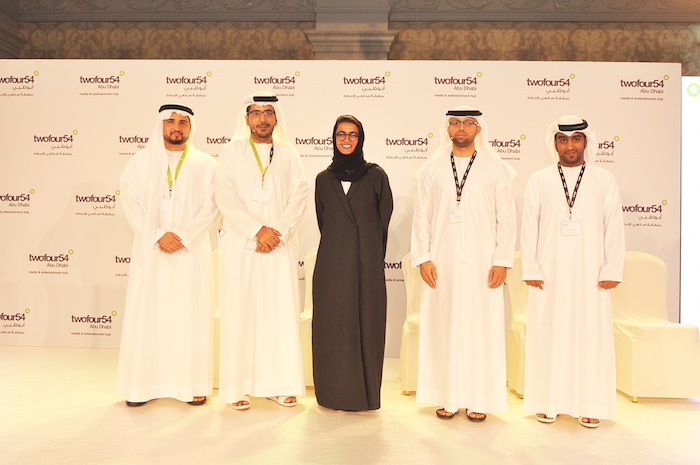 In an initiative aimed at enhancing communication and collaboration between government entities in Abu Dhabi and the UAE, twofour54 recently held its first Government Connect event, which introduced twofour54’s services and initiatives to 150 government officials and professionals representing 82 government bodies. In her opening note, HE Noura Al Kaabi, CEO of twofour54, welcomed attendees and encouraged collaborative partnerships to promote the Capital’s reputation as an all-round business and cultural hub.

Noura Al Kaabi commented,  “Ever since its establishment in 2008, twofour54 has evolved to become the leading hub for creative professionals and local talent development in the media industry. The Abu Dhabi government community no longer needs to look abroad for world-class media, production and communication services; they are provided here at home through twofour54’s comprehensive offerings and we are proud to make such high calibre services accessible to federal and state entities in the UAE.”

“We look forward for more collaboration with local government bodies to exchange knowledge and achieve mutual success in creating business opportunities and building a strong infrastructure as we work to cement Abu Dhabi’s position as a leading hub for content creation in the region,” she added.

At the event, local federal and government entities were introduced to twofour54’s unique free online service, the “Briefing Room”, which allows them to connect with partners based at twofour54 in the media and entertainment industry. Through an easy-to-follow process, government entities can post their briefs to connect with the best companies to fulfill their needs. To date, more than 400 briefs have been posted to partners on the “Briefing Room” by government and private entities.

The event also featured a presentation that shared with the audience detailed information about the Media Zone Authority, twofour54, and the Abu Dhabi Film Commission (ADFC). The presentation also highlighted the services available to local government entities through twofour54 across a variety of disciplines such as talent development, film and TV production, and professional training. Additionally, the audience was introduced to a seamless three-step process for setting up businesses at twofour54 and to the application of ADFC’s 30 percent rebate scheme, and the direct and indirect impact it has on the Emirate’s GDP.

As part of its talent development initiatives, twofour54 introduced its fellow government officials to the host of options available to them through its creative lab and community. twofour54’s creative lab is an online community of more than 10,500 media enthusiasts from around the region that provides support to creative individuals in the media industry; in only one year, it has provided practical experiences to more than 300 of its members.

In addition to its ongoing support through its creative lab and community, twofour54 offers local talent an entrepreneurship scheme that allows them to obtain a license in the media zone without the need to rent office space. The concept was explained to government officials during the presentation as it embraces and encourages the entrepreneurial spirit which plays a vital role in the overall economic development of the Capital.

Since its establishment in 2008, twofour54 has provided 751 training courses to 8,578 delegates; of whom more than 58 percent were Emirati, and produced a number of projects including TVCs, documentaries, and infomercials for government entities like Masdar, the UAE Armed Forces, Khalifa Fund, and the Tourism and Culture Authority. Moreover, twofour54 has the capability to provide a variety of media training courses across all disciplines in a way that matches the needs of each client through customised training programmes.

Today, twofour54 is home to more than 350 licensed company; 30 percent of which is owned by Emiratis. 3,591 jobs were created for local media and entertainment professionals and nearly 50,000 hours of Arabic content productions were produced at twofour54’s studios.