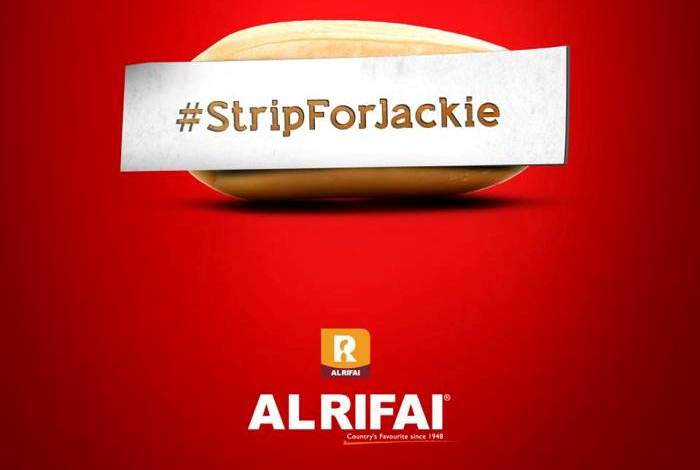 Since February 10, images of Lebanese skier, Jackie Chamoun, showing some skin have been making the rounds across social media in Lebanon and abroad. The images are part of a calendar photographed three years ago, featuring a number of professional skiers form around the world, that went viral just recently – a few days, in fact, after the start of the 2014 winter Olympic Games in Sochi, Russia, in which Chamoun represents Lebanon. Lebanon’s minister of sports and youth, Faisal Karami, worried about the impact of Jackie’s breasts on his conservative country’s reputation, asked the Olympic committee to launch an investigation into the incriminating photo shoot, looking for a possible exclusion of the skier from the games. The outraged ministerial reaction triggered an even more vocal uproar from Lebanese citizens, condemning the public posture as sexist and hypocritical.

Such uproar wouldn’t be anything to write home about, if it weren’t for the creative twist it rapidly took. The hashtag #StripForJackie started to circulate on Twitter, Facebook and Instagram, along with photos of people stripping in support of the accused sportswoman. A Facebook page titled “I am not naked” was launched by four young protestors – the graphic designers Cynthia-Maria Aramouni and Mohamad Abdouni, and photographers Tarek Moukaddem and Cark Halal – featuring photos of an increasing number of Lebanese people, famous or not, wearing nothing except for a sign saying “Strip for Jackie”.

Soon, brands joined the chorus, while dozens of individuals took it upon themselves to post their own homemade images on their pages and feeds; to the point that the wave of protest made the headlines in various international media titles. Almaza, Al-Rifai, Exotica, Volkswagen, Stolichnaya, Khoury Home, among others, created visuals that went along with the idea, and competed to see whose ad would bring the biggest number of Likes, shares and retweets, etc.

In its March issue, Communicate Levant speaks to the people behind these ads, who share with us their thoughts about the campaign and the power of social media in Lebanon.