Top CEO Makes a Comeback with its 6th Edition

The first day of the event kicked off with the Arab Women’s Forum, drawing an audience of over 200 attendees. An exclusive roster of speakers from across the MENA region indulged in constructive conversations over topics ranging from women in war fields to discussing their role in tech and marketing

Top CEO Conference & Awards make a return this year with its 6th edition. Hosted at the exquisite Palazzo Versace, Dubai, the event launched with a conference that celebrated Arab Women. The prestigious CEO awards will be distributed at the same venue on May 18th at an evening gala.

The two-day event’s mission is to facilitate connections, generate growth opportunities, recognize the GCC's most prominent executives, and allow participants to network and exchange ideas across both on-and off-record sessions.

CEO of Special Edition, Julien Hawari, who is also the organizer of the event opened the stage with a welcome note and also expressed his condolences over the passing away of the UAE President Sheikh Khalifa bin Zayed Al Nahyan. “The Top CEO Conference & awards highlight and recognize the resilience of GCC’s business leadership. The event is back in Dubai which is a hub of optimism, innovation, and progress amidst the challenges such as the pandemic,” he said.

Princess Reema bint Bandar Al Saud set the tone right for the forum while addressing the very first keynote session. In a pre-recorded video, the Saudi Ambassador to the US discussed future plans for economic diversification, sustainability, and gender diversity for Saudi Arabia in the light of a post-pandemic era. “The business reset started in Saudi Arabia well before the pandemic, the Arab world is young, educated, and tech-savvy. Our markets have also grown driven by technology and innovation. While many different regions had to take a step back during the pandemic, we emerged as better prepared,” said Princess Reema. 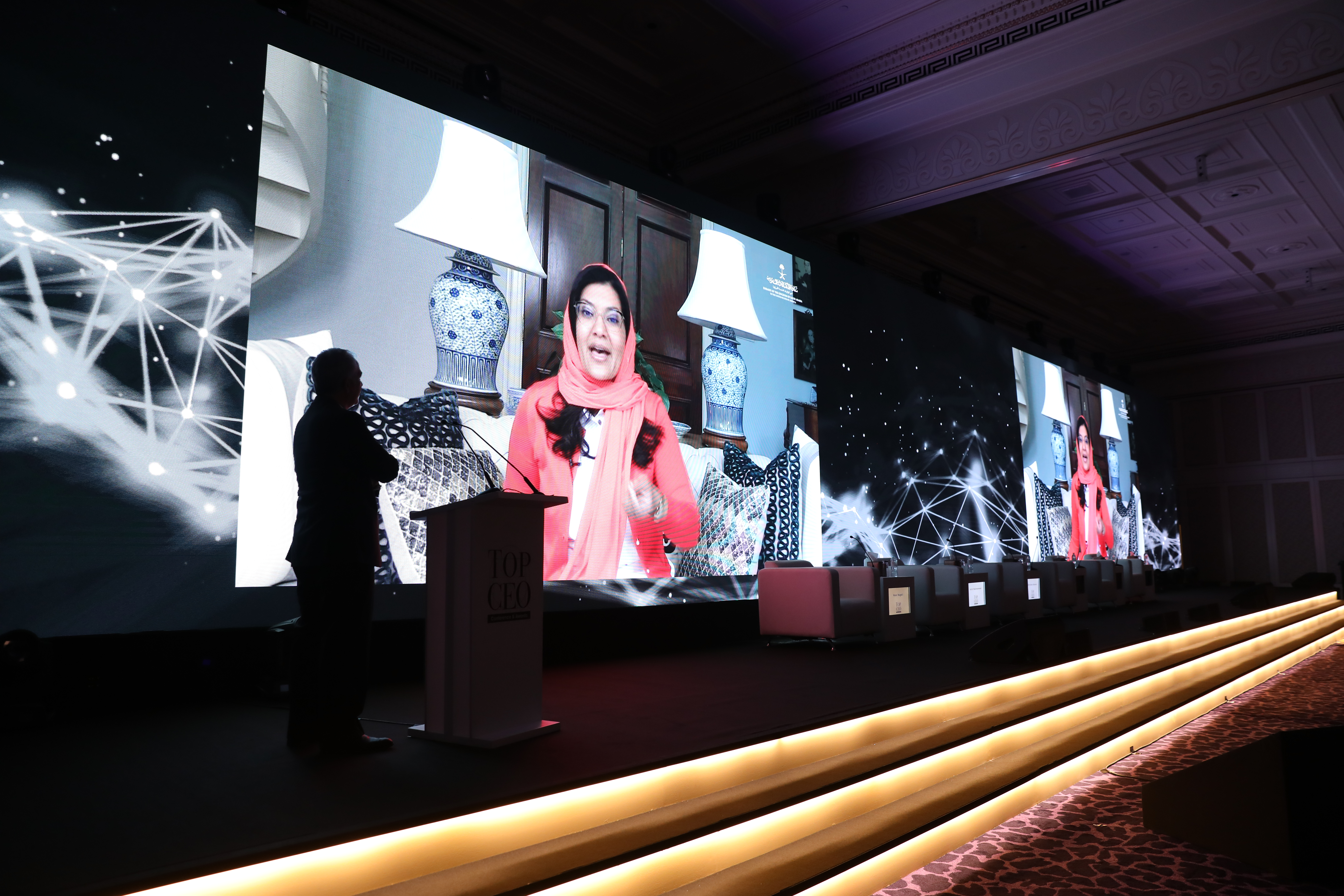 Panel discussions explored conversations about women which were hosted by women. Victims who were featured in the trending Netflix docuseries, Tinder Swindler while sharing their stories, debated over financial and criminal fraud detection and prevention. Another panel featuring Assistant Editor at Arab News, Noor Nugali, Reporter at Sky News, Arizh Mukhammed along with Senior News Anchor at Alhadath, Christiane Baissary discussed women in the fields of war journalism.

Another panel discussed the revolutionary growth of women in Saudi Arabia. Media personality and former editor-in-chief of Arab News and the Saudi Gazette, currently Chairman of Quartz Communications, Khalid AlMaeena sat down with women working and advocating for change. While answering a question from the audience at the end of the panel, Sarah Al Tamimi, Vice Chair of The National Committee to Combat Human Trafficking and Deputy President of the Human Rights Commission said, “The gender gap parity has definitively reduced since 2016, and women are quickly occupying positions in the workplace. While we still have our battles to fight, we need to acknowledge that we have come a long way.”

An opportunity for our future CEOs

Students from universities across the region contributed to the event as an integral part of the audience. With free access to attend all the panel discussions and keynote sessions, students were able to openly network with the speakers through Q&A sessions, interactive workshops, and coffee breaks. “This event encultures everything that we will be exposed to in the coming years and gives us an insight into the reality of the industries. Over social media, things look so glamourous and flattering, this conference gives us a realistic view of what our professions will be like after university,” said Riya Sawlani, who is an Accounting and Finance student at Canadian University.

Kinza Khan, a PR student at Canadian University further added, “All the speakers stepped out of their shoes to address our questions. Irrespective of the generation that they come from, they resonated with our queries in the context of issues that we are facing today. Attending this forum helped us bridge the gap between what we study in theory with practice.”

Held under the general theme of The Great Business Reset, the conference highlighted some of the transformational changes that GCC economies might be undergoing, further reflecting on an important reset of business, society, and global integration.

In the GCC, the impact of economic reforms and market liberalization is evident with old legacy companies and business groups getting strong competition from the agile new players, dynamic business models, and the independent entry of global brands.

A panel discussion on the evolving work culture touched on the various new reforms that businesses can adopt to overcome the various challenges that were faced during the pandemic. “Obviously, there is a focus on diversity and inclusion, but the pandemic has slowed that growth in the region. Women have had to leave their jobs to take on other responsibilities,” one of the panelists Christine Harb, Global Brand Council at VISA, said. Samia El Kadiri, Advisor & Head of Research Governance and Compliance at Hawkamah, further added, “Gender diversity is not a new topic, but following the pandemic, gender balance has become a goal for many organizations. Gender equality can be effective as a first step in the region.”