Top CEO is back
Insights Industry
Back

Top CEO is back

Top CEO, the definitive platform for the recognition of exceptional business leadership of CEOs in the GCC, is back and inaugurated its second edition today. 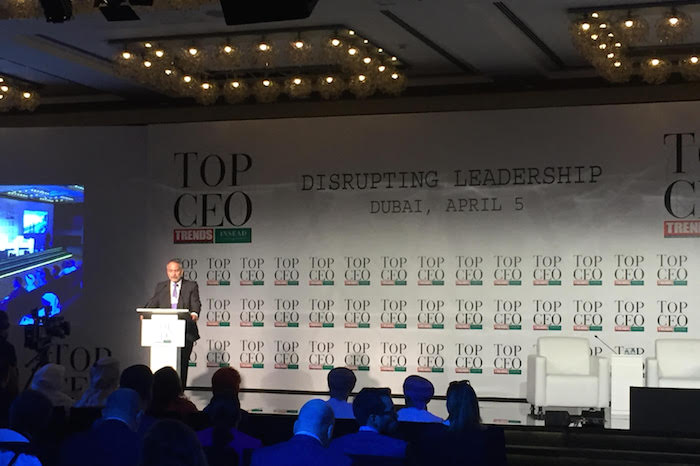 Top CEO, the definitive platform for the recognition of exceptional business leadership of CEOs in the GCC, is back and inaugurated its second edition today.

This time, the event, which gathers the region’s business leaders under one roof, includes a day-long conference followed by the Top CEO Awards ceremony later in the evening.

Organized by Mediaquest, the parent company of Communicate, Top CEO’s agenda is tackling pressing business topics and celebrating outstanding business leaders from across different sectors in the GCC.

The conference comes at a time of the recent oil drops that have left the world, especially oil-exporting countries, grappling to adapt with a new economic reality.

This means several topics, such as the post-oil era, economic diversification and the search for a new economic base, are becoming the main points of conversation in the GCC region and beyond.

“Diversification is the name of the new game, and it will stay with us now,” says Abdulrazak Al Faris, the Deputy Secretary General for Economic Affairs, while addressing a group of the region’s business leaders, shortlisted CEOs and members of the media, during his opening remarks at the Top CEO Conference.

“Oil still contributes around 60 to 80 per cent to budgets in the GCC. In the UAE, that’s around 65 to 70 per cent, so this has to be addressed… We need to think how to diversify the economic base away from oil,” he adds.

Another issue that will be extensively discussed at the conference is the introduction of VAT and other forms of corporate taxation, which are expected to be rolled out across the GCC in the coming few years.

“I don’t think we should be weary or afraid of talking about tax. If we have the choice between a single fiscal instrument like a tax to replace hundreds of fees and charges, I think one single thing is better than fees and charges creeping up on us every day and night,” Al Faris says.

The day started off with an inspirational talk by Lewis Pugh, United Nations Patron of the Oceans. His story about swimming in the Arctic to see the North Pole was an exemplification of key leadership qualities of focus, determination and passion. He went on to elaborate on other events in his life that have shaped him into the person he is, by highlighting the important of not limiting one’s self-confidence and persistence.

Besides economic diversification and the repercussions of introducing taxation regimes, discussions at the Top CEO Conference will cover several other relevant areas of conversation, such as the disruption caused by technology in business, women business leaders, cybersecurity, emerging markets, education and talent, and anti-corruption and transparency.