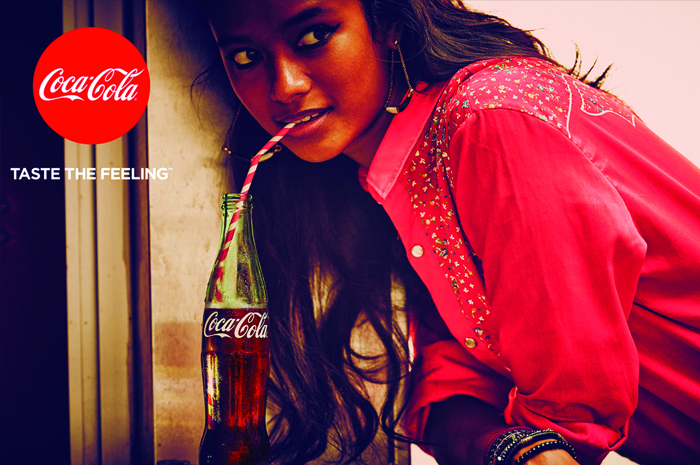 Coca-Cola, one of the world’s most iconic brands, announced a new strategy on January 19 in Paris that left some feeling a tad disappointed, and others curious. At its Dubai press event, the brand revealed everything that went into its new one-brand strategy and its new campaign, “Taste the Feeling”.

For the first time, Coca-Cola has adopted a strategy that brings together its brands as one. “Taste the Feeling” marks a big shift for the company, which has finally decided to move away from its “Open Happiness” campaign after seven years.

However, Marcos de Quinto, chief marketing officer of Coca-Cola, emphasizes the importance of the strategy behind the campaign. He compares it to fireworks: “They light up, explode and then fade, but the strategy will always remain.”

Coca-Cola is known for being everyone’s brand. It doesn’t matter who’s drinking it – the Queen of England or a local from any other country. It doesn’t look out of place. That’s the unique brand proposition, but it was being contradicted by the existence of Coke’s other brands – Coca-Cola Zero, for example. “Until now, our strategy has been alternate brands – not variants – that have different personalities. So, we are undermining the brand promise of Coke,” says de Quinto.

Moreover, consumers have an affinity for the original Coca-Cola brand, but, as times changed and health started playing a huge role in product choice, consumers have been forced to choose another brand altogether, resulting in a certain dropout rate.

As part of this new, inclusive strategy, there is a strong indication that the can and bottle designs will be revamped in the near future. And there are promises of more red – Coke’s signature color.

“Taste the Feeling” was devised with the objective of combining product benefits and emotional values – contrary to ad agencies’ usual advice of adopting one or the other route – explains Rodolfo Echeverria, vice-president of global creative, connections and digital. “‘Open Happiness’ was very satisfying, but ‘happiness’ was setting the expectation very high, so we wanted to simplify things,” he says. The new campaign focuses on simple, everyday ‘moments’ instead – “a very contemporary concept, especially for this generation,” he adds.

To come up with the slogan, the team went back in time to study all of Coca-Cola’s previous slogans and came up with one that focused on the product benefit – “Taste” – and its emotional value – “Feeling”. The result: “Taste the Feeling”. The brand’s red disk and the slogan in its standard typeface will remain consistent across all brand assets.

The new communications will take a 360-degree approach. Keeping in mind the focus on simplicity, several of the key visuals don’t feature the Coke bottle or can in full – one even shows the bottle without the logo being seen. Echeverria explains that the reason behind this is to create an air of intimacy and mystery, as well as to make the situation look authentic. There’s also an eye for detail in every execution where there are hints of red – even in something as minute as the actor’s collar.

Music is a big part of the campaign and brings together two kinds of sounds: product sounds, such as ice and carbonation, and social sounds, such as friends opening a can, cheers and burps. The core product sound is Coke being poured onto ice, while the core social sound is “Ahhh” – together, these mark a signature of sorts toward the end of campaign’s theme song, which is an original composition.

Surprisingly, “Taste the Feeling” was developed in just six months – and the company is already working on the next wave of the campaign.

The campaign is set to go live in March in the MENA region. The tagline has been translated into Arabic – although not in all dialects yet. “Anthem” and “Brotherly Love” – rather, their regional versions – will be the two spots leading the MENA region, since they have tested well in the market.

The regional renditions are quite similar to the global ones, except for a minor change of actors. Jonathan Lawlor, marketing director, Coca-Cola MENA, explains that the response in the region to extremely local content wasn’t very positive. “Coke is a global brand [and so] consumers want that global appeal,” he says.

And yet, many locally relevant campaigns, such as “The Happiness Phone Booth”, worked extremely well in the region. Moreover, “Open Happiness” lent itself more easily to CSR and do-good initiatives, which played a big role in shaping Coke’s brand perception. Lawlor reassures that the brand will continue to include such CSR-based initiatives under the new campaign; however, the priority currently is to roll out “Taste the Feeling”. That being said, Coke has already begun working on a different campaign for Ramadan.

Speaking about the growth of the brand in the region, Lawlor says that, thus far, Coke has been focused on share from competition. However, the new campaign, combined with larger plans for the Coca-Cola family of beverages, is a stab at re-energizing the category. “So, it’s about expanding the pie and the category, and growing from that,” Lawlor adds.

Coca-Cola’s simplification of its strategy pays homage, in a way, to its founder, who developed the brand back in 1866 with the intention of providing some refreshment and uplift to his neighbors. Since then, the brand has traveled across geographies, classes and income brackets, probably reaching its peak with “Open Happiness”. Now, it’s time for Coca-Cola to go back to the basics. It remains to be seen if this simplicity will indeed work for the brand in an increasingly complicated world.