Screened off
Insights Industry
Back 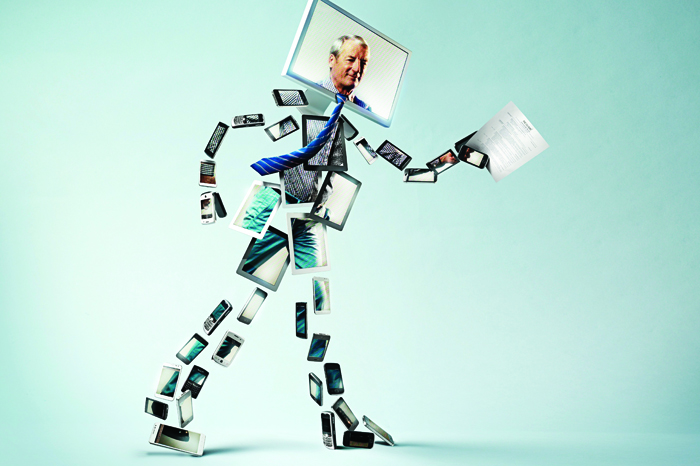 Since the revolutionary invention of the Internet, media channels have been changing year after year, urging agencies to optimize their clients’ media plans in order to adjust to the new realities. Global numbers show that today’s consumers spend seven hours a day watching a screen.
“The first screen media in history was TV, a medium that is still considered the most effective in the MENA region, due to its high reach. While in the past, TV used to be the sole focus of the house­hold, today’s viewers have a number of connected screens, from tablets to mobiles, which distract their attention,” says Levant general manager of media agency Carat, Karen Hoyek Slaiby. In this regard, Carat’s proprietary agency research CCS, reveals that 35 percent of people today, actively plan their evenings around the TV schedule, 57 percent use a second screen in some way while watching linear TV and 33 percent comment on social media about what they’re watching during the show. “Previously, with on-demand viewing, people weren’t watching TV on the linear TV schedule, but as and when they pleased and with the ability to fast-forward through ads. With social media, people now want to discuss what they are watching in real time across Facebook, Twitter, etc., when a popular show is airing for the first time. People are now more invested in what they are watching and want to be part of a conversation as it enhances their experience. This is very exciting for advertisers as it allows them to talk with their consumers rather than at them, by using branded content,” explains Hoyek. However, although the world has dived deep into multiscreen marketing, Lebanon is still on the surface.

WIN OR LOSE. Like every new communication technique, integrated campaigns come with their trials and errors, and even though the secret for success may seem obvious – follow the consumer’s habits – the Lebanese market has a hard time when it comes to understanding and planning a 360 campaign. “Integrated campaigns are not offline campaigns that are taken online. This is a common misconception that many clients have. An integrated campaign starts at the conceptual level with no boundaries and involves digital thinking at the earliest stages. It never starts with ‘x’ budget offline and ‘y’ budget online, but allows the idea and the target audience to impose the platform,” says deputy general manager of digital agency Cleartag, Omar Abou Ezzeddine. “Every integrated campaign should start with a digital platform that focuses through its various channels (website, blog, social media, etc.) on electronic customer relationship management (eCRM), which is already the best lead to analyze potential customers. Moreover, another opportunity brought by integrated campaigns is the fact that every cent spent on digital media can bring to the client a concrete, measurable result,” says CEO and founder of digital agency Social Aim, Nehme Lebbos.
“Another misconception is that an integrated campaign automatically needs to involve all the chan­nels, which is wrong. The campaign should spread among channels very carefully, based on the target audience,” explains Abou Ezzeddine, adding that what makes the success of an integrated campaign is consistent messages throughout platforms, a strong visual impact, the introduction of pull marketing online (as opposed to common push marketing), an adaptive execution based on timely data analysis, cost effective advertising, and proper targeting for each channel. Mindshare’s Hmedeh agrees on the importance of consistency across channels. “Brands make a mistake when they target their audience with the same tone of voice throughout all channels. It is good that you can reach your audience everywhere, but you need to be careful with the message you are targeting them with; when connecting via mobile, you have to be first of all fun and entertaining, then informative and it is a different tone when commu­nicating via TV. Clients need to understand that they have to change their kind of conversation according to the channel they are using. We face a problem when clients have some guidelines and limitations in the tone of voice they adopt, and they refuse to step out of them.”
“It always was and will continue to be about understanding people’s behavioral habits and media journeys. Analytics and data have become more ac­cessible with the advent of digital, but the numbers alone won’t tell you the whole story. They need to be matched with insights and an understanding of human behavior, motivation and trends. A concerted effort for pushing and directing all paid media in­vestments to owned media pages and platforms, if well managed, will allow for the most engagement. Putting in place effective communication plans that accompany people on their usual daily journeys, which along the way includes various platforms and touch points, enables us to seemingly connect with them. The result is that people feel their favor­ite brands understand them and want to pursue a two-way relationship, and in turn, that makes them more loyal. It’s not about being invasive or ham­mering people from screen to screen, but rather joining them on their multiple screen journeys and being present when they are most receptive. Each screen has a role to play and mastering this aspect of multiscreen communication also leads to better engagement and impact with customers. It’s only when all these elements are at play, that the force of a multiscreen presence really comes to life,” says
Vertical’s Hajj. Mindshare’s Khatib remembers the time when only TV campaigns were planned, knowing that TV only could get the client an 80 percent reach. Today, the best campaign across all TV channels can get clients a maximum reach of 65 percent. “In a few years, we lost 15 percent of the audience; so we need to find them and reconnect with them,” she says. Today, agencies know, while planning a TV campaign targeting a specific audi­ence, that this audience is using at least one other screen simultaneously. “The TV ad can convey a message and the second screen a call to action,” says Carat’s Hoyek. “Advertisers should be careful, though. Users might be switching their attention from the TV to escape advertising, so slapping irrelevant banner ads all over the [second] screen could cause a negative backlash for the brand. The first rule is to make content relevant to the user to ensure that any second screen placement is well received.”
Khatib adds: “What we always tell our clients is that they need to stop interrupting what people are interested in while consuming a specific channel. While watching TV, listening to radio, accessing Facebook or any other social media, the key is to engage with the consumer in a way whereby we’re not disturbing but continuing the engagement they already had with the channel. It’s about creating conversations with the consumers and being part of the content they are interested in. This is why with our clients, we started to look at how we can provide consumers with content they are interested in, instead of interrupting their media experience.”
Globally, clients actually moved from marketing their own brands into creating content for media channels such as TV and theater. Aware that the battle for the audience is based on the content and its exclusivity, international brands are willing to co-finance and bring original content to media chan­nels, so that consumers are attracted to the channel and to the brand at the same time.

A WIN/WIN PROPOSITION. The multiscreen landscape offers clients and agencies numerous opportunities, even in a market as challenging as Lebanon’s. “The multiscreen world offers agencies and their clients a plethora of positive things, such as a higher rate of engagement, relationship building, more efficient targeting and dynamism. Rather than just the old static or one-way relationship between brands and customers, the multiscreen world offers us various avenues of engagement and a two-way relationship. If a brand ignores the multiscreen experience, it loses touch with its customers and – even worse – with its online brand persona. You could have plenty of customers online praising you or even criticizing you and that’s something you need to respond to, at the very least, and at best pre-empt. As an agency, we will always push for integrated plans, but we need clients to commit to them and understand their importance,” says Vertical’s Hajj.
It is true that the local market is constantly chal­lenged by plummeting media budgets, but media planners still expect to see an increase in digital spends as brands realize that an integrated approach is the only way to keep up with a multiscreen society that is living in an increasingly virtual world. “We believe that online usage will increase within the coming years and will take a higher share of budget; other communication channels will be more flexible in applying creative executions presented by the agencies, in order to overcome and ‘survive’ the online ‘invasion’,” says media director at Havas Media Levant, Ruby Eid, while Hajj adds: “We are not looking forward to switching from one channel to another. TV will remain the channel with the highest receptivity, given its format and the fact that in our part of the world, consumers are and will remain kind of lazy; they enjoy being passive, looking at the big screen and being hit with whatever mate­rial possible; they don’t want to give their opinion all the time, and even if they enjoy the interaction sometimes, they won’t be eager to participate in user-generated campaigns for instance,” says Mind­share’s Khatib. “In more advanced markets, they are talking of releasing blockbuster movies in theaters and homes on the same day – that’s impressive and offers plenty of opportunities.”
With the endless opportunities that come with the fragmented media of the multiscreen world, assessing the success of a campaign could become harder, though. “At an agency level, we should evolve today not only on a product level, but on a research level as well. We need to have the necessary tools in order to measure success,” says Khatib. This sometimes depends on the client, says Hmedeh , who adds that clients make it harder when they don’t share all the data with their agencies. “Sometimes, clients treat their numbers with a lot of confidential­ity and don’t share them with us, whereas we need to understand how their business is performing, in order to help them make their business profitable and their brands famous.”
Carat’s Hoyek concludes that “brands can sometimes be their own enemies, while they need to trust their agencies to guide them through the ever-changing media market in order to produce successful integrated campaigns.”