May the best agency win
Insights Industry
Back

May the best agency win

It’s that time of the year again.

It’s that time of the year again; no, not the time for new resolutions and old regrets – at least, not in print – but the time for Communicate to unveil its list of the top creative and media agencies of the year, based on the most awarded campaigns of 2014.  The list is based on a tally of all of 2014’s campaigns and their wins at the Cannes Lions International Festival of Creativity, the Dubai Lynx awards, the MENA Cristal awards, the Effie MENA awards and the Festival of Media.

Starcom MediaVest Group Dubai climbed up this year ranking first – from second last year – with 26 points. Following second, albeit with a considerable lag, is Mindshare MENA with 14 points. Interestingly, aside from its “Winner Stays” campaign for Nike, which racked up a lot of metal in 2014, none of Mindshare’s award-winning campaigns were among the most awarded 50 campaigns. This is a forward move for the network, which ranked third last year, sharing the spot with OMD Beirut. OMD Beirut, however, slid down to the eighth spot, garnering a mere five points with just two entries: “The Proof of Love” for Flower Town and “Shoot to Celebrate” series of TVC for LBCi – as part of its ongoing collaboration with the Lebanese channel on the “Cheyef 7alak” flagship campaign. The third spot saw a new entrant emerge, and deservingly so; Initiative Dubai scored 12 points and registered 24 campaign wins in total throughout the year. Close on its heels are OMD Cairo and UM Dubai, tying in at the fourth spot; which is no mean feat for both agencies, considering the fact that they recorded just five and three campaign wins, respectively, in comparison with the numerous wins by other agencies. Standing out amongst the list is UM Abu Dhabi, snatching the fifth spot with nine points for a single campaign, “The Cinema News Broadcast” for Sky News Arabia, which won a Silver at the Dubai Lynx, and a Gold as well as a Bronze at the Effie MENA Awards.

Below are the Top 10 media and creative agencies of 2014 and here are the Top 50 most awarded campaigns of the year. 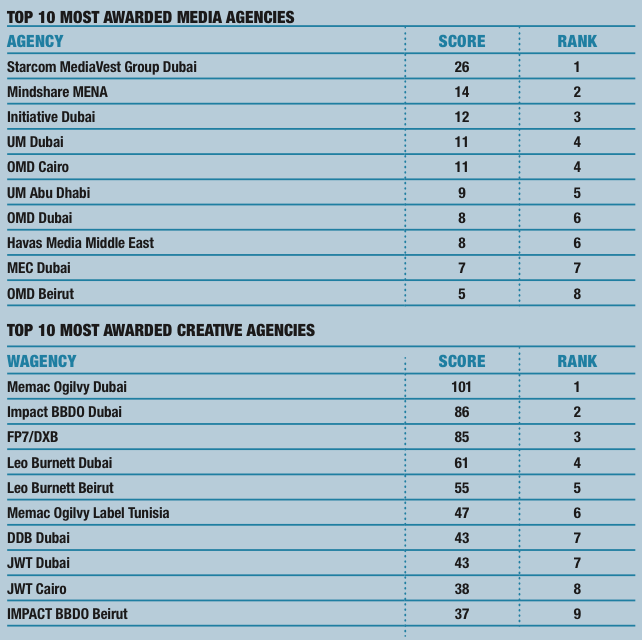 Jack in the box

The rankings for the creative agencies might surprise some – pleasantly though, we hope. Last year’s Creative Agency of the Year, Y&R Dubai was nowhere to be seen this year and was replaced with Memac Ogilvy Dubai – up from the fourth spot last year – leading with 101 points. With six different campaigns winning big, the agency’s heavyweight was UN Women’s “The Autocomplete Truth”, which won six Golds, two Silvers and two Bronzes at the Dubai Lynx, three Golds and two Silvers at the Cannes Lions and one Gold at the Effie MENA Awards. Impact BBDO Dubai secured the second spot with a total of 12 winning campaigns,  ten of which made it to our Top 50 – including a Grand Prix at the Dubai Lynx for Cimenterie Nationale’s “Referee” copies. It is worth noting that Impact BBDO’s Beirut office, which ranked sixth last year, fell down to the ninth position. Despite some big campaigns that registered equally big wins at the regional award shows, including SmartLife foundation’s “SAPNA – How 17,793 Nails Shaped the Future for Generations to Come” and Emirates NBD’s “Hey…Future Me”, FP7 Dubai ranked third with a total of 85 points for its 16 winning campaigns this year. The most interesting of the lot was Memac Ogilvy Label Tunisia, which ranked sixth at 47 points, but did so on the back of a single campaign; “Mobilizing the 12th Man” for Tunisian football team C. S. Hammam-Lif, which won two Grand Prix, seven Golds and three Silvers at the Dubai Lynx Awards.

Despite Egypt’s promising works and Lebanon’s consistently good, but not outstandingly great efforts, for now, Dubai seems to be leading the regional ad industry. Our story last year concluded: “Is that to say that Dubai is the creative place today? The odds may well be in the city’s favor.” Well, a year has passed and we haven’t unearthed anything to the contrary.

Title: SAPNA – How 17,793 Nails Shaped the Future for Generations to Come

Title: Volunteers Do Not Seek Recognition

Title: Feel for the Signs

To find out which were the most awarded campaigns in 2013, we looked at four big award shows – the Dubai Lynx (UAE), the MENA Cristals (Lebanon), the Cannes Lions (France), and the Effie MENA Awards (UAE), which is organized by Communicate’s publisher’s Mediaquest Events.

We tallied up the awards each campaign won. For the Lynx awards and the Effies, we gave four points for a Grand Prix, three for a Gold, two for a Silver and one for a Bronze. For the Lions – the Lynx’s international big brother – we doubled those scores. For the Cristals, we gave one point for a Cristal and two for a Grand Cristal.

We gave points each time a campaign won one of these prizes. So, if several executions were cited in the winning of one Lynx, Cristal, Lion or Effie, we awarded points only once. For example, at the Lynx, there were occasions when single executions won Gold and campaigns of related executions won the Gold Campaign category. For such instances, we awarded three points for the Gold and three for the Gold Campaign. If a campaign won in more than one category (print and outdoor, for example) we gave points for both awards.

However, if executions received an individual Gold, Silver or Bronze (not Gold Campaign etc) in different sub-sets of the Lynx categories, we took those into account. For example, if in the Media category, campaign X won one Gold for ‘Use of Digital Media’ and one Gold for ‘Use of Broadcast,’ we counted them as two Golds.

In the end, we tallied up each campaign’s points and put the ones with most points on top. You can see our list on pages 62 and 63, but note that some didn’t get enough points to appear on the list, scoring only threes, twos or ones.

As many of the campaigns scored the same overall, we worked out our rankings in a way similar to the awards shows. Congratulations to the winners.