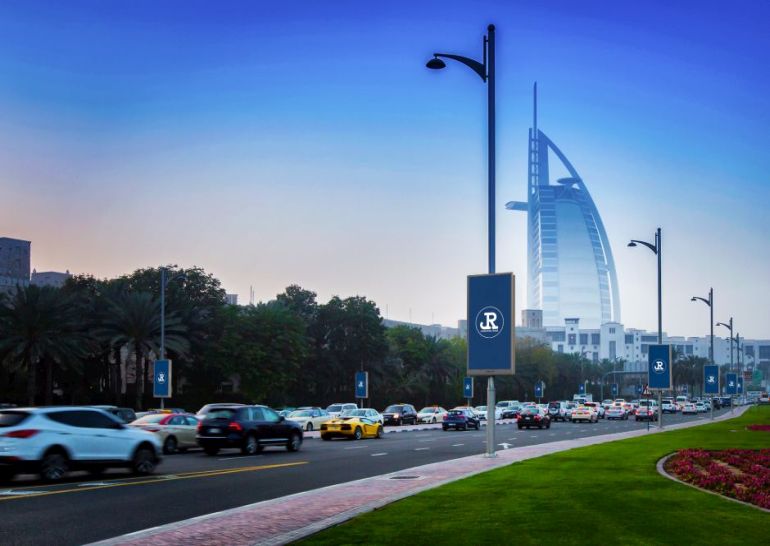 JCDecaux SA, the global outdoor advertising company, has announced that it has signed with its Emirati partner, DXB Media Advertising, a new street furniture contract in Dubai for 10 years, following a competitive tender by the emirate’s Roads and Transport Authority, RTA. This contract will be exercised jointly by an entity that will be ultimately 75 per cent owned by JCDecaux and 25 per cent by DXB Media Advertising.

This exclusive contract covers the installation, operation, upkeep and maintenance of 418 advertising lamp posts strategically positioned along the famous Jumeirah Beach Road, as well as 50 fully-interactive e-Village situated in iconic locations around the city.

This intelligent street furniture initiative is part of the 34 new projects of RTA’s Smart City Program to be implemented over the next 5 years and aim to transform Dubai into the smartest city worldwide.The advertising lamp posts, which will feature 836 panels measuring 3.2m², will be installed by the end of summer 2017 and will give advertisers and their brands a platform for innovative campaigns targeted at a premium audience on one of Dubai’s busiest main streets.

The 15km route runs along the coast and provides access to beaches, residential areas, major hotels and the most popular restaurants and attractions.

For this first very strategic partnership with RTA, JCDecaux leveraged the expertise of its Research and Development teams to develop advertising lamp posts with a new design that fits perfectly into the urban environment.

In addition, each model was submitted to a life-cycle assessment to measure the environmental impacts of its design, production, operation and end-of-life, reducing its energy consumption by approximately 39 per cent and meeting the Group’s sustainable development standards.

Meanwhile, the e-Village, a smart city product and an interactive communication platform for the RTA will be set up in some of Dubai’s most iconic locations, including along the Marina Promenade, next to the famous Burj al-Arab hotel and in the historical districts of Bur Dubai and Deira.

Combining a series of innovations, they will provide residents and visitors with a range of services as well as general, governmental and commercial information in Arabic and English. The services will include e-commerce sites, tourism and cultural information, traffic, transit, weather and more.

Jean-Charles Decaux, Co-CEO of JCDecaux, said: “We are very proud of this strategic partnership with RTA, whose values of excellence, innovation and creativity are important to JCDecaux. With this key step in our regional development, we will be offering our expertise to RTA in order to equip Dubai with a new generation of intelligent advertising street furniture in line with our business model, which is based on financing products and services through advertising that blends harmoniously with the urban environment.”

“As the number one outdoor advertising company worldwide and in the Middle East, we work hard to make Dubai the showcase of our ability to deploy the most innovative technologies and the most creative formats, for the greatest benefit of cities, residents, advertisers and their brands,” Decaux added.