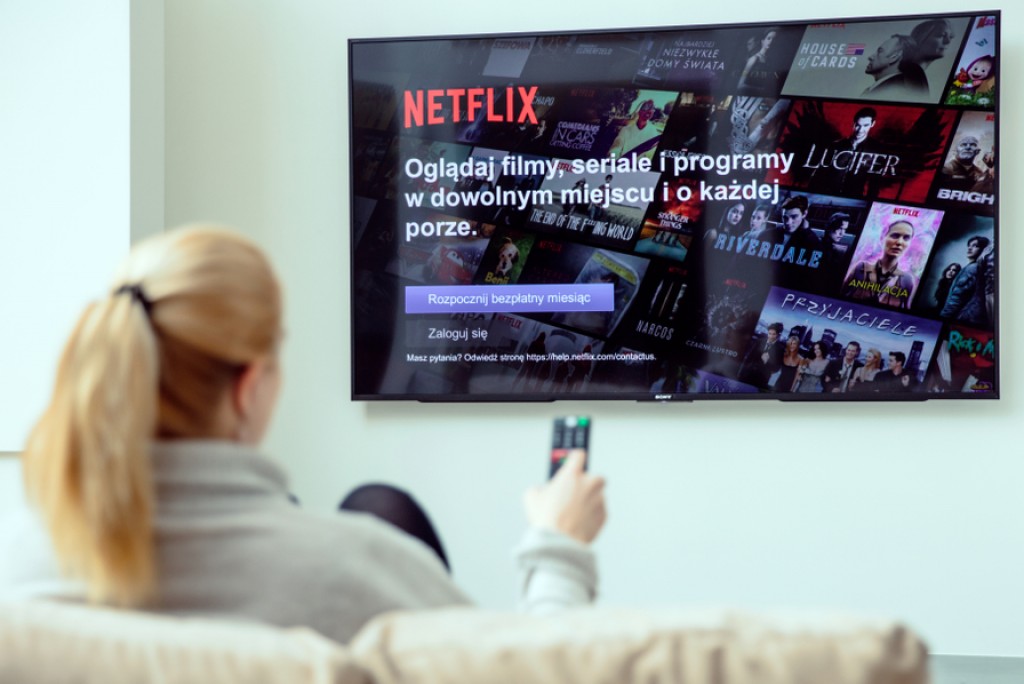 With the emergence of subscription video-on-demand services (SVODs) such as Netflix and Amazon Prime, the media has been quick to foretell the demise of TV.

But, is there any truth to those words?

TV has remained a powerhouse and mainstay in modern life ever since its introduction in the 20th century. Many historical moments broke through to audiences through the television, such as the 1969 moon landing, and neither Netflix nor any of its ilk are yet to demonstrate any achievements to rival those in significance.

Other companies, such as Facebook and YouTube, have also carved a piece of the video platform pie for themselves.

It might be unfair to have such high expectations of a young medium like SVODs, but if they are to truly trump TV, they will have a lot to contend with.

A well-oiled machine poised to rival a giant

Netflix initially started as a DVD rental service in the late 90s, and in 2007 began offering a streaming service. In 2012, they began producing their own content, and Vox reports that they are eyeing 700 original TV series by the end of 2018, with upwards of $8 billion in production expenditure.

The company told investors in January that it plans to increase marketing spending by more than 50% in 2018, from $1.3 billion last year to $2 billion this year, Vox reports.

What do you think? TV or digital: What’s scoring the most when it comes to FIFA World Cup 2018?
And, for the first time ever, Netflix received more Emmy nominations than any other TV network this year, reported Statista.

The streaming giant received 112 nods from the Academy of Television Arts & Sciences on Thursday, surpassing the long-time undisputed leader in this category, HBO, by three nominations.

The Emmys are awarded annually for excellence in the television industry. They are the most prestigious prize in television, equivalent to what the Academy Awards (Oscars) are to the film industry.

While critical acclaim is only secondary to Netflix’s shareholders, who tend to focus on financials and subscriber growth, the company acknowledged in the past that its original content is the most important driver of subscriber growth. Critical recognition for its shows will likely help Netflix convert its billion-dollar content investments into new subscribers. 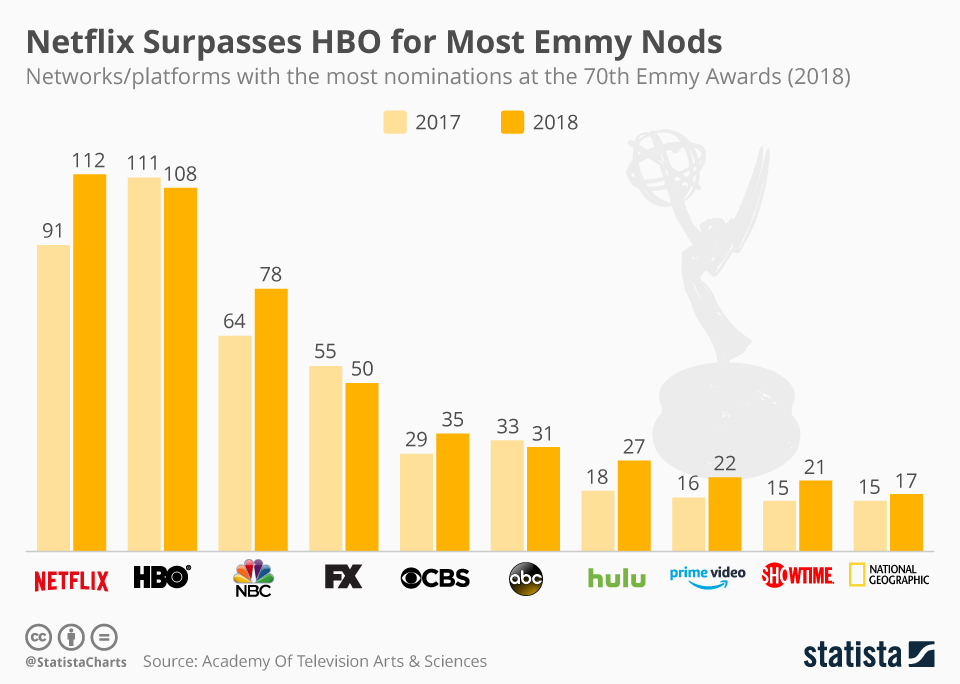 READ: What two key strategies is Netflix using to smartly draw in ME viewers?

Netflix broke new ground in the Middle East and North Africa (MENA) when it launched its service here at the start of 2016. However, by the end of that year, they only had 137,000 subscribers, according to estimates by analytics firm IHS Markit. That is a microscopic fraction of the MENA’s population of 436.7 million in 2016, as tallied by the World Bank.

The research company estimates that subscriptions will rise to 1.29 million by the end of 2021, which is still a negligible number.

What is the source of these disappointing figures?

The most obvious answer would have to be the notoriously slow internet speeds in the region. While the GCC fares better in that regard than the rest of the Middle East, their connection speed is still nothing to write home about. The Arab country with the fastest internet connection is Morocco, according to a 2017 study by the UK-based company Cable. Yet, Morocco is ranked 79th globally, leagues behind countries such as South Korea, the UK, and Sweden.

Another reason to consider is that piracy is still rampant in the region, and copyright laws aren’t paid much heed by the populace. Why pay for an expensive, subpar internet subscription to stream content when you can just get an entire bootlegged TV series for the price of a Starbucks coffee?

Tune to this: Forget TV, as advertisers are tuning in to radio. But why?

Facebook is getting in on the action as well, having just won the rights to stream all 380 Premier League soccer matches per season from 2019 to 2022 in Cambodia, Laos, Thailand, and Vietnam. The deal is worth about $264 million (£200 million), The Times reports.

Unlike Netflix, YouTube, on the other hand, is performing very well, reporting that 80% of Saudi millennials use its service at least once a day. Furthermore, 55% consume more video content online than they do on TV.

It is worth mentioning, however, that YouTube is tailored more towards bite-sized entertainment rather than the hours-long binge-fests of Netflix, which an inconsistent connection will disrupt. Therefore, YouTube is more ideal for the broadband environment in the region, which explains the high numbers, and will not pose a threat to heavy TV viewing.

Quite frankly, these numbers completely contradict the doom and gloom foreseen by naysayers who claim that linear television is coming to an end.

TV is here to stay

People still rely on TV for the pieces of media that matter: breakings news, government announcements, and international stories of interest. A 2016 study by YouGov confirms this, revealing that Americans are more likely to trust news that they see on TV than they are to trust what they read online.

If America, which is Netflix’s emerging market and one that has matured significantly, still harbors this trust in traditional media, then it is beyond certainty that the Middle East is still holding on to its age-old traditions and attachments to television.

“[The traditional linear model] is just as important as ever. On-demand viewing is still only a fraction of live, linear viewing, even in markets where the vast majority have access to DVRs [digital video recorders]. In the UK, for example, the hugely popular iPlayer service accounts for just 2 percent of total BBC TV viewing,” says Chris O’Hearn, the general manager of the UAE’s Television Audience Measurement System (tView).

“TV is and will remain fundamental to lifestyle,” he continued.

“The fundamental thing to realize about the Middle East market is that there is a predilection towards free content,” said Nick Grande, managing director of Dubai-based ChannelSculptor, a consultancy service that links TV content producers, operators and telecommunications companies.

“Relative to other, more mature television markets, paid content in whatever capacity has struggled to gain penetration. [Pay-TV] penetration ranges from 20 to 30%, or in some countries 90%. The Middle East, [however], has never gained more than 10% penetration; it tends to be about the 6% mark,” Grande says, proving that the region remains very traditional.

Recent data by Zenith has shown a slight decrease in TV consumption, but nothing too remarkable to warrant TV executives to pack their bags and go home. 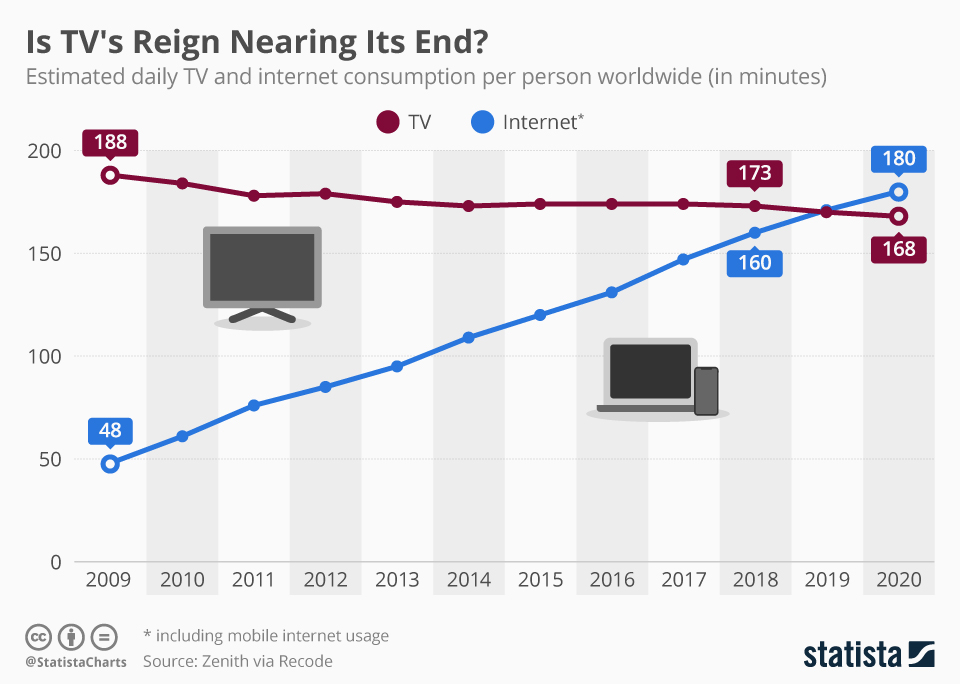