In their latest campaign, ‘Go Anywhere,’ Clorox in partnership with Horizon FCB Dubai tackles one of the most stressful of sanitary situations, the roadside toilet. 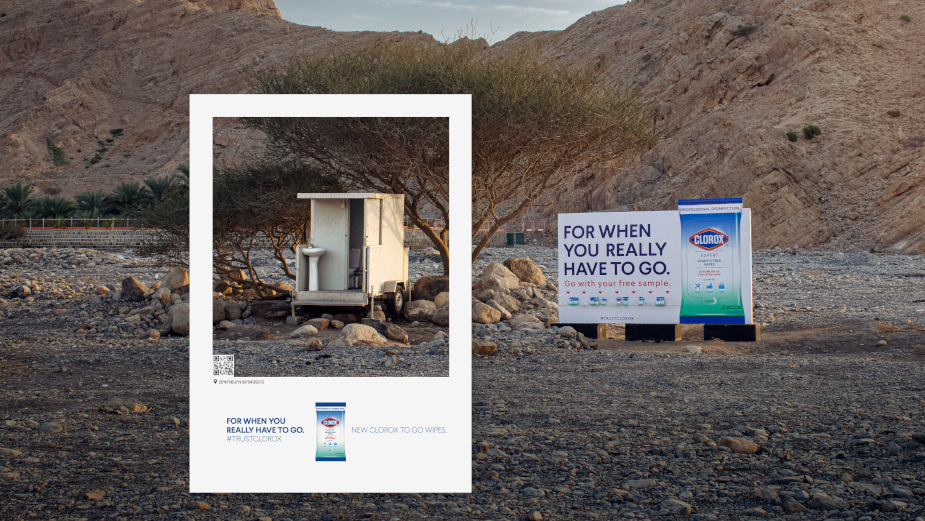 The campaign film opens to a drone shot of the outskirts in Ras Al Khaimah, to a roadside toilet featuring a billboard by Clorox reading, “For when you really have to go, go with your free sample.”

With the billboard and a complimentary print ad with scannable QR codes to see the real toilet location, Horizon FCB, continued to strengthen Clorox’s brand message, ‘you can trust in the power of Clorox.’

Rodrigo Rodrigues, Executive Creative Director at Horizon FCB walks Communicate through the true insight, execution and effectiveness of this campaign.

How was the concept of this campaign designed and why did you choose to go with this specific (and very real) insight?

We knew we had real insight, something that, people can instantly relate to. The power of the product is that you can use it on the go, wherever you are, so we decided to go guerilla, placing a billboard in a remote location, where our target market would be, people who really faced this problem.

How did you find the location for the billboard?

We began scouting for real isolated toilets in the region. Until one of our Art Directors, while in Ras Al Khaimah, discovered the toilet that is now the star of our campaign. It was meant to be! So we built the billboard next to it with free samples of Clorox On-The-Go wipes, for people to take and actually use this toilet.

As this was a guerilla-style campaign the metrics were based on the experience of people visiting the location and interacting with the billboard. During the time the billboard was placed next to the toilet, our message organically invited people to take a free sample if they really had to go! We measured the success by looking at the number of people who took a sample and then used the toilet, the number of samples we gave away, and that at the end of the day we had 1 very disinfected toilet.