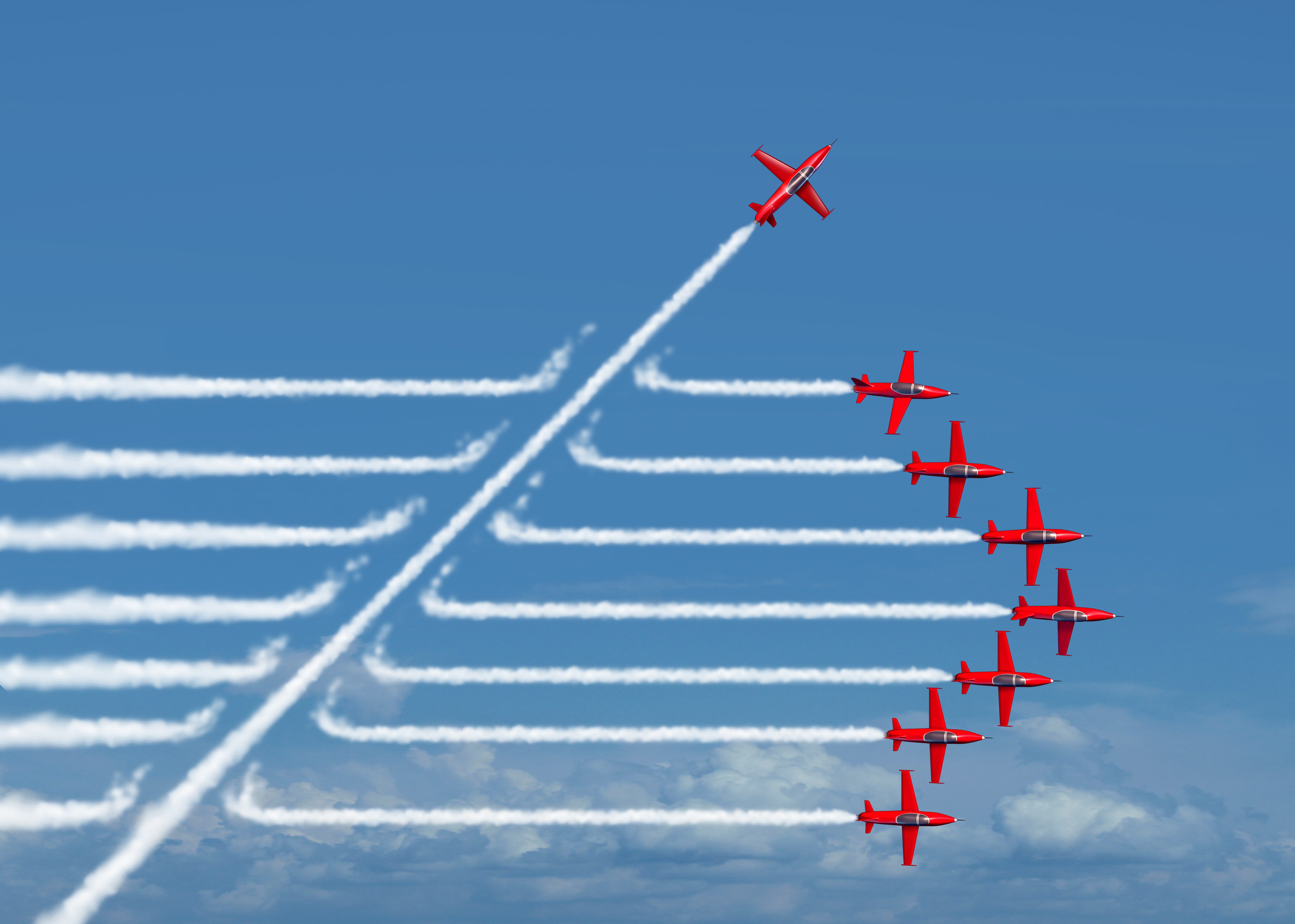 According to a new report from Accenture to be released this week, disruption from innovative digital technologies could put more than US$575 billion of Middle Eastern companies’ total value at risk.

The report notes that while executives are aware of the threat of disruption, they are not prepared for it; nonetheless, appear reluctant to invest in the effective innovation needed to deal with it.

The report, titled “Accenture Middle East Innovation Maturity Index,” is based on a survey of 200 C-suite executives in Saudi Arabia and the United Arab Emirates (U.A.E) and an analysis of more than 275 companies across the region, to be released during GITEX week.

The research reports that there is US $578 billion in trapped value across the Middle East region, adding that only 24 percent of the surveyed companies said they can realize measurable value from their data.

The analysis measured “trapped value — i.e., the value that businesses could be releasing or sharing if they could change faster while  capitalizing on technology-enabled innovations to avoid industry disruption.”

However, the report detailed a small group of companies “Innovation Champions” that are up to 7 percent of the companies on the  Accenture’s Innovation Maturity Index. The company said that these companies use data, digital tools and new ways of working to execute what Accenture refers to as “wise pivots” — i.e., building new digital-based businesses while continuing to grow and transform their core businesses.

Accenture’s Innovation Maturity Index measures companies’ ability to innovate by adopting structures and processes that enable them to be data-driven and “hyper relevant” to customers.

“Leaders are willing to make the tough decisions,” said Michael Sutcliffe, group chief executive of Accenture Digital to Communicate. He added that companies that are more willing to disrupt are those that follow a disciple and willing to be part of the first cycle of changes. 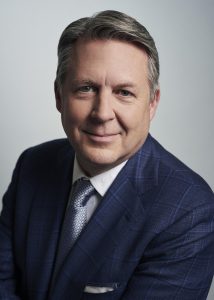 “So that’s really the reason that we publish such research,” he commented, to help teams understand what is happening within the industries and be able to map their future.

Michael Sutcliffe elaborates further on the report’s findings to Communicate.

Why is this report important?

Well, the first thing that we try to do with these pieces of research is to really understand what’s happening. And so we evaluate the population of companies that understand what they’re doing, and then how well what they’re doing is actually working in terms of generating business results. So this report allowed us to look at the people who’ve demonstrated that they’ve generated good business results, and ask whether or not that group of companies is doing something different than the broader population. And the answer is yes. And so this report points out for areas where there’s a consistent gap between not the intention because the intentions are the same, but the actions. So when we look at this report, we look at the gaps between companies that are performing well, and the companies that are not, it’s a pretty consistent gap between the two.

Why are companies reluctant to disrupt?

Depending on what their strategy is in the market in terms of how they want to compete. So there is a strategy called fast follower, it says, in our particular market, there’s enough room for a handful of players. So I don’t need to be first, I don’t need to worry about the economics. It’s okay, if somebody gets there before I do, I’ll just follow them quickly. And although they’ll get a temporary advantage in the market, it’s not a big enough advantage to matter. I’ll just wait and see what somebody else does. And then I’ll copy it very quickly. So the question is, does that produce good business results in the current environment? And the answer is: our evidence suggests no.

Who are these innovation champions?

So the concept of an innovation champion is not necessarily somebody that imagined for the first time, whether new ideas, but it might be that they just innovated and how they’ve applied an idea. So I’ll take an example of artificial intelligence. There are many fields inside of artificial intelligence, one of the ones that’s very hot right now is around chat bots. And there are a wide range of different sophistication around chatbots.

So you might find that a digital champion is somebody who took the same idea that everyone else in the industry worked on and they applied it differently in their business and gave it a dramatic economic advantage.

Why do you think that maturity index is actually accurate?

The things that we were looking at were two dimensions to the research. The first question is, we looked at the demonstrated impact of innovation in an existing industry today, as evidenced by announcements of what’s already happened in terms of new products, new services, new customer experiences, or dramatic changes in the cost structure of an industry. So that tells us about existing or current disruption that executives have to deal with. The second part of the research was to ask executives, what their plans were to introduce new products or services, or change their operating models or their commercial structures. So we were looking at the future susceptibility of disruption to that industry. 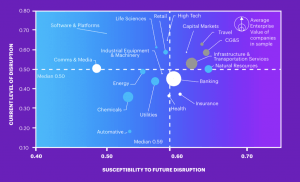 Exposure to disruption by industry. Picture from the report (figure.1).

Where does the communication and media industry stand within this index?

What’s interesting is that the communications and media industry actually includes about seven sub industries. So there’s a content part of the industry where people are producing content, there’s the distribution arm of the industry, where we’re distributing content, there’s the broadband services, mobile services. Then there’s the part of the industry where we’re developing software and platforms. So all of that is wrapped into communications industry. And what you would see is the dynamics are quite different. So for example, the platforms market companies like Google, Facebook, Twitter, etc, they have a different dynamic in terms of disruption in their industry, then you would find in broadband service providers or mobile service providers, or content creators or content distributors. So you actually have to kind of look within the industry sectors to understand what’s really going on, and where the disruption is likely to happen.

So each of the industry sub segments definitely impacts the other sub sector. So if you take a company like a Facebook, a content, platform company, and you say, Facebook doesn’t have any interesting content, and nobody would go to Facebook. So content impacts their ability to be an attractive platform. The other thing that’s equally true is if Facebook can’t distribute it, for example, places in China that don’t have broadband access, it’s very hard for them to be relevant because they don’t have the distribution side. So you do have to look at the dynamics of the industry sectors and think about who the content producers are, what the distribution channels are, who actually owns the content. And then just importantly, who wants to advertise on it because the different audiences on platform, determine which advertisers are interested in talking to those audiences. And that, of course, can be geographically specific. So you might find that a platform like WeChat, which has got a dominant position in one country, doesn’t actually have a lot of usage and adoption in another. And so it’s less interesting to an advertiser.