10 AI terms you NEED to know
Insights Industry
Back 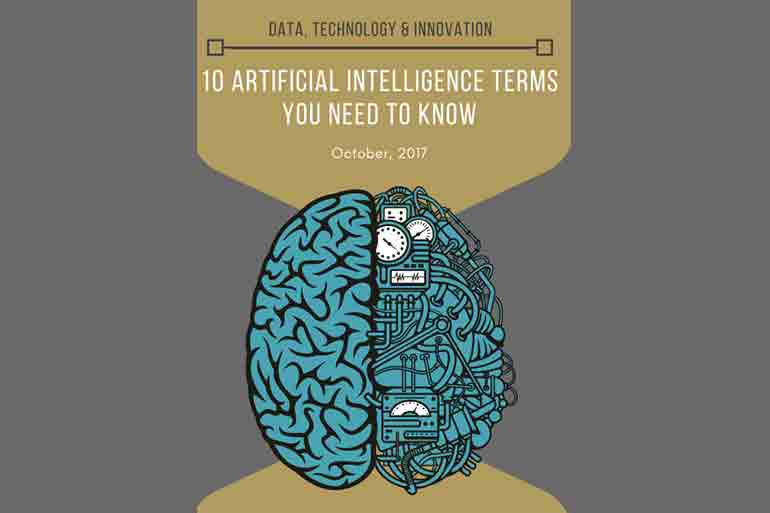 As technological advancements spur the pace of change around the world, the advertising and media industry is naturally affected. One of the key areas impacting it will be Artificial Intelligence (AI).

Therefore, Publicis Media’s data, technology and innovation’s practice has put together the top 10 AI terms that everyone should know or be aware of.

If we wanted to describe AI in basic terms, it would be a machine that is capable of thinking the way humans do. Since their introduction, computers have been better than us in tasks like doing calculations on large numbers, processing data or solving logical problems. Troubles start when we want Alexa to hold a meaningful conversation in our everyday language or the new iPhone X to recognize our face to unlock. Those are just some of the directions that have been explored by AI engineers over the last couple of years.

Machine learning is part of the wider AI field. The focus of those methods is to enable computers to learn without being explicitly programmed. It means, that as time passes and more data on certain problem gets gathered, the machine’s ability to make the right call increases. Machine learning algorithms are used in many areas of our life. If the Netflix app is suggesting you a movie to watch or you see a product recommendation on Amazon you should know it’s a result of a machine learning algorithm.

Deep learning is an even narrower subset of machine learning. Those methods focus on solving problems more abstract than which products are frequently bought together. Imagine you have a number (let’s say 10,000 so that you wouldn’t feel tempted to do it manually) of cat and dog photos that you need to separate. Despite the fact, that you wouldn’t have a problem with telling them apart, it’s hard to come up with specific rules that could be programmed to automate the task. This is where deep learning comes in. If given enough good examples, the machine makes its own generalizations and comes up with rules (that a programmer might not even understand) to solve the problem.

Is there a way to measure AI? How can you tell, if a machine you’re using is truly “intelligent”? One of the methods was introduced by Alan Turing in early 50’s. In the test, a human evaluator would judge natural language conversations between a human and a machine designed to generate human-like responses. If the evaluator cannot reliably tell the machine from the human, the machine is said to have passed the test and be considered “intelligent”.

An algorithm is a specification of how to solve a type of problems. In other words, it’s a process or a set of rules that should be followed in order to solve a problem. In machine learning, systems use many different types of algorithms in order to achieve desired results. Some of the examples would be decision trees or regression algorithms.

Artificial neural networks are systems that are inspired by the way our brains work. Just as our brain is built of axons, those systems are a net of artificial neurons that analyze input data (light that comes into our eye) and turn it into output (we “see” a cat). Neural networks are often used in deep learning problems. They’re most suitable for problems related to, among others, computer vision, speech recognition, and board game strategy.

Predictive analytics are all the algorithms that focus on using available data to forecast what might happen in the future. A good illustration would be to use data on past campaign performance to estimate the impact of next flight. Those methods take one step further from descriptive analytics, which goal is only to provide insight into what has happened. In this case, a good example would be a comparison of CTR values for different placements.

Supervised and unsupervised learning are the two most common types of machine learning problems. In the former case, the machine is being taught based on provided examples. A good illustration is, again, the problem of cat/dog recognition. At first, the machine can’t distinguish between a cat and a dog, but if given enough labeled pictures, it will tell them apart.

In unsupervised learning, we don’t have any training examples to teach our algorithm. The goal here is to find patterns in data when it’s too complicated to do it by just looking at it. A good example would be segmentation projects, where we would like to split our client base into smaller groups to which we would send a better-tailored message. Unsupervised learning can help us with that.

Data mining is all about looking for patterns in data. Originally, those methods focused mainly in looking for correlations between different metrics or comparing subsets and had very little to do with machine learning or AI. Nowadays, all data mining tools have such modules implemented.

What’s cognitive computing? There is no one official definition but cognitive computing has been used to refer to new hardware and/or software that mimics the functioning of the human brain and helps to improve human decision-making. Does that sound familiar? Yes, it’s basically the same as artificial intelligence and those two terms are very often used interchangeably.