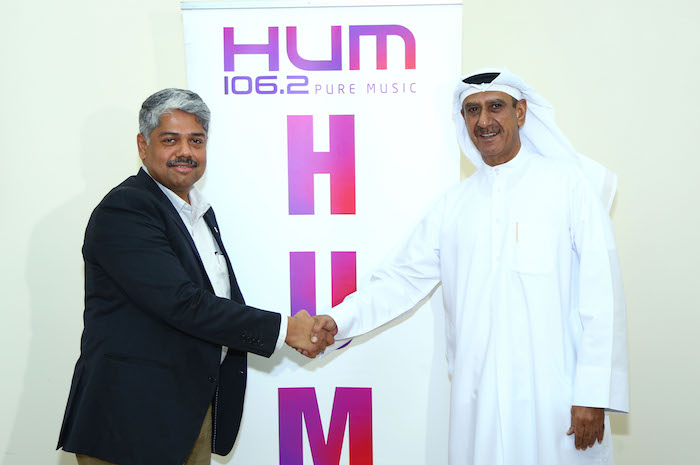 Zee Entertainment, a media conglomerate present in 171 countries with over one billion viewers globally and over 75 television channels has confirmed the acquisition of UAE’s first and leading radio station Hum 106.2 FM. The network has been known for launching the first Hindi Satellite channel in India in 1992, introducing the first Bollywood TV channel for the Arab audience with Zee Aflam, and introducing the Arab world to Hindi programs dubbed in Arabic with Zee Alwan. Its foray into radio through the acquisition of Hum FM, makes it the only entertainment network in the region to provide an extensive media solution to its partners across television, radio and digital.

Amit Goenka, CEO of international broadcast business, Zee Entertainment Enterprises Limited, says in a statement, “New and strategic investments in media and related business has always been at the forefront of Zee’s business strategy. At Zee International, we are looking at strategic acquisitions across the globe to increase our footprint and market share in the entertainment industry. The acquisition of Hum FM in UAE is a step in that direction and we are upbeat about its prospect in the coming times.” Amit also adds “we are excited with our new business ventures. Radio comes immediately after our foray into film production and distribution, Rustom and Jazbaa have done extremely well globally and specifically in the UAE and Middle East markets”.

The addition of UAE’s first Hindi Radio station to its bouquet of TV channels makes Zee Entertainment one of the strongest players in the UAE’s entertainment space. More announcements are expected in the coming weeks on the future channel programming and its positioning

Mukund Cairae, CEO Zee Network (MENA and APAC), adds, “This move is a diversification to our entertainment business portfolio, adding to the numero uno position we possess in Television among South Asians in the Middle East. Now we can offer media across Television, Radio and Digital platforms. This investment also shows our commitment to the region and its business landscape.” He also said “there can be a great synergy between content and mediums that will now be possible. A common initiative can now have a 360-degree Audio Visual exchange through platforms owned by Zee.”

Radio has been an area of interest for Zee for quite some time and this investment comes with extensive planning and studying the brand values, ratings and revenue generated by the station, Hum FM comes across as the best option. Hum FM has a legacy of almost two decades with a current market share of 26 percent making it is the top Hindi radio station in the UAE. Zee is confident that it can leverage its very strong South-Asian brand and connect on to radio, while also leveraging its audience and content across TV and radio.