Yahoo Maktoob makes slew of announcements for the MENA region 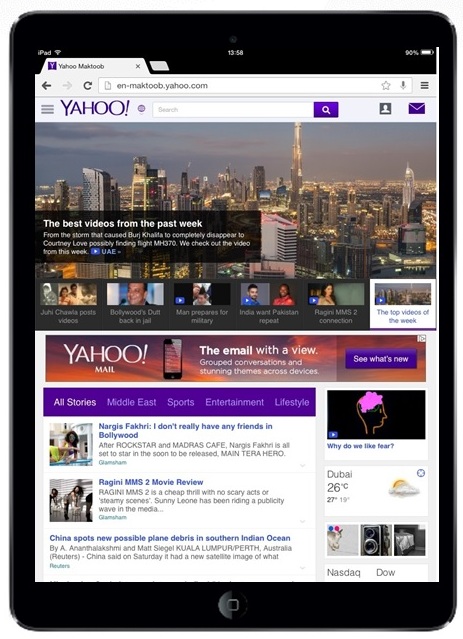 In an event held yesterday, Yahoo Maktoob announced the launch of its revamped homepage with a new design for both its English and Arabic editions in the Middle East and Africa region. ” The new Yahoo Maktoob experience is a smart design that is intuitive, functional and optimized for easy, everyday consumption, and is fast and consistent across PC, tablet, and smartphone,” said the company in a statement.

Features of the new Yahoo Maktoob homepage include new real-time news feed, a “save for later” functionality for the stream of news, utilities that are customized according to the the daily habits of users, spotlighting the latest information from Yahoo Weather, Finance, Flickr and more; easy to navigate, clean design;

Dawn Airey, senior VP at Yahoo EMEA, who was in the region for the launch, said, “Since our homepage is our front door – this is of course, the next natural place for us to focus as we continue our commitment to great design. We know our users want fresh information fast, in a way that gives them choice and control, yet maintains some elements of what’s familiar to them. That’s exactly what we are sharing today with the new Yahoo Maktoob experience.  Whether you are browsing the top stories; checking your email; posting pictures, checking the weather or even finding out what the stars have in store for you.  All your daily habits are within easy reach on one page […] The award-winning weather app and the refresh of Flickr and Yahoo Mail are further examples of how we are reimagining Yahoo, always keeping the user at the center of what we do.” She added: “you will be seeing within the infinite stream of content on the homepage highly relevant commercial messages.”

For the World Cup, Yahoo Maktoob is launching a multi-language football app that updates users in real time on the scores and updates during the matches – such as penalties, red cards, yellow cards – allowing them  to instantly share the updates on social media networks. The app also gives users access to a slew of articles around the World Cup. The publisher is also partnering with comedian Ahmad Helmy for a web series that will follow Helmy during a trip to Brazil, where he will be learning about football.

On a global level, Yahoo has announced an exclusive media partnership with José Mourinho, the current manager of the Chelsea football club, who will be providing analysis and editorial pieces for the publisher during the World Cup and after it.

Yahoo Maktoob also announced a partnership with producer of original video content – and hit YouTube comedy web show – in Saudi Arabia, UTURN.  Starting in April, Yahoo Maktoob will launch a UTURN channel under its video platform Yahoo Screen, featuring UTURN’s new productions throughout 2014, including leading comedy series, a library of UTURN’s best video content, as well as exclusive content that includes behind the scenes videos.  This partnership extends UTURN’s reach to Yahoo Maktoob’s large user base of 60 million monthly users across the Middle East region, and is the latest addition to its premium video offering.