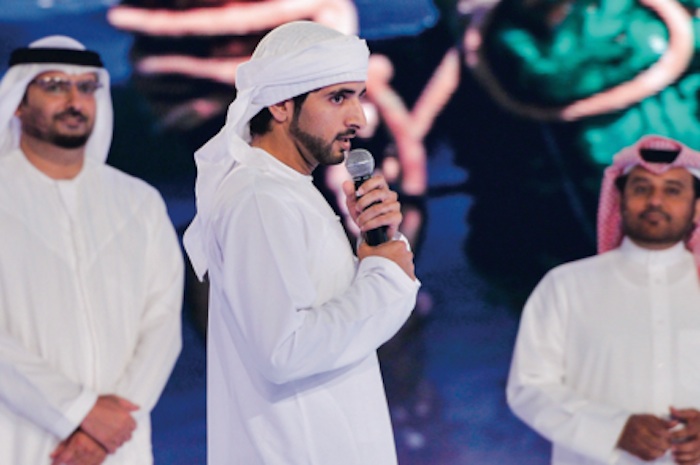 The show’s design is unique because it fuses tradition and modernity using an unparalleled approach. Produced by the Hamdan bin Mohammed Heritage Center, whose mission is to preserve the arts and culture of the Emirati people, along with TV production house Les Folies, the program is based on a quite simple – but innovative – concept, that can be credited to His Highness Sheikh Hamdan bin Mohammed bin Rashid Al Maktoum, Crown Prince of Dubai: His Highness tweets a stanza, or “chater,” from his original Nabati poetry to which members of the Twittersphere respond with their best poetic finish. Nabati is a colloquial language of the Arabian Peninsula community dating back to the 16th century and known to combine spontaneous artistry and direct expression. This makes it surprisingly suitable for Twitter, which shares the same simplicity and convivial tone.

Before the show aired each week, the producers tweeted a Nabati verse written by Sheikh Hamdan. Once the “chater” was made public, participants had a two-hour window to submit a 140-character tweet concluding the stanza. The live show featured a panel of poets who judged the Twitter responses, narrowing them down to choose one winner and two runners up.

Viewers also enjoyed the fact that the Twitter audience was asked to write a Nabati verse accompanying an original photo taken by Sheikh Hamdan.

Communicate took a tour of El Beit’s state-of-the-art production facility in Dubai’s Studio City just before the final episode was scheduled to air. As would be expected, due to its technologically savvy nature, the show requires a very advanced system, including a one-of-a-kind OB van adorned with the latest equipment. The final episode was different from previous ones because former winners were invited back to compete for two cash prizes of AED1 million. This was the first show in the Middle East to operate live via Twitter, which helped it to reach people at unprecedented rates. In two short seasons, El Beit’s official Twitter page got more than 100,000 followers and has received more than 800,000 tweets.

The goal here is a unique and multifaceted one. All parties involved in the show’s production have accepted the task of reviving a form of communication steeped in tradition. Not that this is an easy mission. As generations move toward technological advancements, poetry has been quickly left behind. Besides, Nabati is spoken less and less colloquially around the region, and even fewer members of the younger generations are studying it. The show’s coordinators considered including English subtitles, but finally renounced the idea, as translating poetry – an interpretative discipline if any – can be very difficult without risking to lose the critical meaning of the words. The option of translating is still being discussed, but no concrete decisions have been made for the third season.

Regardless, the initiative is not only bringing passion for poetry back into the lives of the people who once revered it, but it is also acquainting a new generation with it. On the other hand, it is fusing an old world with a new one by utilizing Twitter as a platform for the poetry’s dissemination. Through blending traditional practices and contemporary methods, El Beit has been captivating a diverse audience base that bridges the generational gap. With this concept, Twitter has opened the door for direct communication, allowing people to interact through the medium of an ancient art form. The result, and its popularity, is inspiring.

No wonder then that the initiative drew a lot of attention from nationals eager to support it – and be associated with it. However, His Ex- cellency Abdullah Hamdan bin Dalmouk, CEO of the Hamdan bin Mohammed Heritage Center, explains that donations from the many individuals and organizations that have come forward, have not been accepted. Sheikh Hamdan, as well as the Heritage Center, wish for the art to speak for itself and their sole desire is not to profit but to keep this custom alive for the sake of the UAE’s national identity.