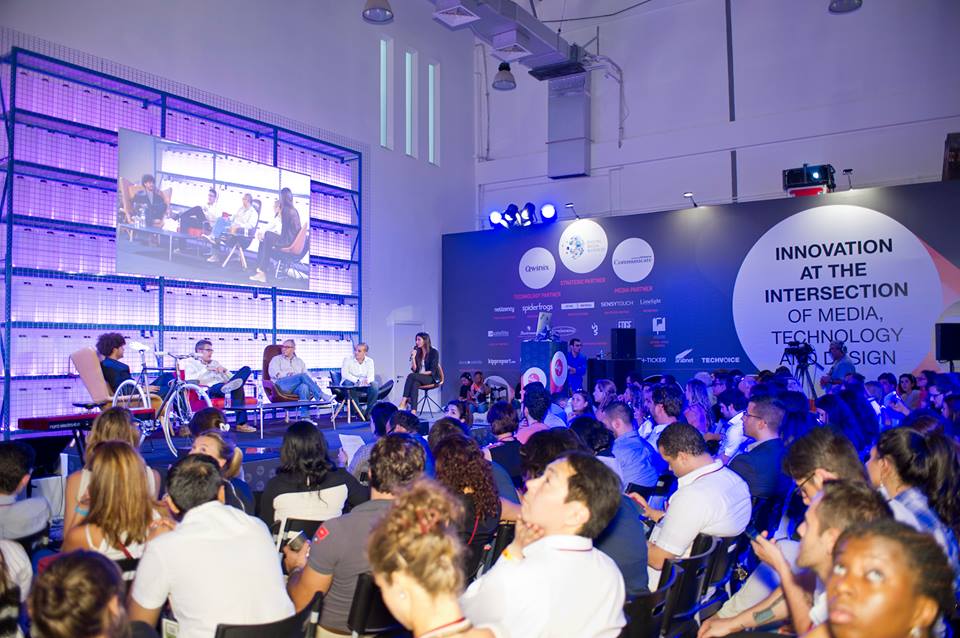 Under the theme “Innovation at the Intersection of Media, Technology and Design”, STEP – a media, technology and design platform for creatives, influencers and technophiles in the MENA region – conducted the third edition of its annual conference on April 30 at Dubai’s Al Serkal Avenue.

The choice of an underground and unfussy venue was not without reason, as STEP organizers had been heavily promoting “good vibes” through the conference’s Twitter handle. In fact, the oneday event started with a special appearance by STEP 2014’s “Stormtrooper” mascot and featured music interludes in-between panel discussions and presentations.

The conference got off to a rough start, with STEP speakers and panelists seemingly unable to grab the attention of audience members, who were, incidentally – or not – highly active Tweeps; so much so that the hashtag #StepItUp was close to trending on Twitter. However, the day progressed more positively, as speakers took to the center – and back – stage to demonstrate the future; such as wearable technologies, including Hind Hobeika’s heart rate monitor for swimmers, Instabeat, and Suleiman Itani’s Atheer Labs’ 3D glasses – dubbed as the Google Glass of the Middle East region.

Indeed “technology”, “disruption”, “innovation” and “creativity” were this year’s buzzwords at the STEP conference, which featured in a host of talks on the future of technology, digital and entrepreneurship. In a workshop hosted by TBWA\RAAD, Rafic Kamaleddine, the network’s chief strategy officer for the MENA region, listed ten obstacles to creativity and innovation, including “lacking creative confidence”, “staying set in existing brain patterns and schemas”, “stopping at the first right answer”, “solving the wrong problem”, “undervaluing empathy” and “thinking you are not a salesman”.

Some of these very obstacles seemed to equally hold back the creative and ad industry, as it transpired in another panel discussion, entitled “Agencies Beyond Digital”, featuring Phil Adrien, digital director at Drive Dentsu; Yousef Tuqan, chief innovation officer at Leo Burnett MENA; Gavin Payne, JWT’s regional head of technology for the MENA region; and, founder of digital marketing agency Netizency, Jad Hindy.

By his own admission, Tuqan says “clients are ahead of traditional agencies”, which, today, “are still not well versed at digital campaigns”, because, as Hindy adds, “they were built to operate in a specific manner that is now embedded in their DNAs” and, due to the sheer size of their operations, accounts, employees and branches, they are set back by bureaucracy, slow turnaround time and low mobility. While Payne says the acquisition of smaller and more mobile digital agencies has helped large multinationals to reshuffle their strategies, it has not necessarily helped them to innovate, because “there is a fundamental difference between innovative people and an innovation strategy”.

When asked whether tech giants, such as Google and Facebook, are phasing out agencies with tailor-made and direct solutions for brands and clients, all four panel members were, naturally, defensive – but only partially persuasive – as to their role in the digital age.

While the future model of agencies remains blurry, Neil Yorke-Smith, assistant professor of business information and decision systems at the American University of, Beirut, drew a clearer picture in his presentation, “Dumb Intelligence: The Future with an Internet of Things”. The presentation focused on “smart hardware, rather than software applications to control dumb objects”.

He argues that, by creating smarter everyday appliances, the progression of useful technology can begin. “Research company Gartner estimates that, by 2020, there will be 30 billion devices connected to the Internet,” he says. He is hoping to see a future where household devices have the capability to work “autonomously”. “The trend is [geared toward] smaller and smaller wearable technology. Stanford University [has created a chip that] is small and robust enough that you can inject it under the skin. Imagine its use in an automatic pancreas for a diabetic patient. The under-the-skin glucose monitor communicates over Bluetooth with your smartphone that controls the insulin pump worn around the waist,” Yorke-Smith adds.

Meanwhile, another panel discussed brand engagement and retail technologies, featuring Ashish Banerjee, vice-president of brand development at Du; Hermann Behrens, CEO Middle East of Brand Union; William Coombe, senior director at Spiderfrogs; and, Olga Kudryashova, strategic planning director at Cheil MENA. Kudryashova says: “Retail is not about buying anymore. It’s about acquisition and experience,” sharing her views on how technology can create customer intimacy through innovations, such as Large-screen displays. “Technology doesn’t have to be high tech. It can be low tech as well. It’s all about the experience,” she adds. When asked about the generation gap that hurdles the introduction of in-store technologies for older consumers, Du’s Banerjee says: “It is not true that old people are not comfortable with technology. We are teaching them slowly.” Hermann of Brand Union points out: “Artificial intelligence is moving from being artificial to becoming more intuitive.”