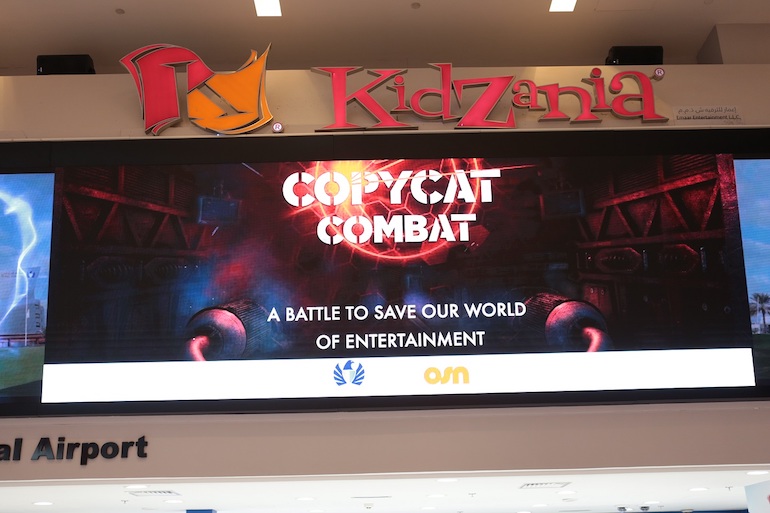 In partnership with Dubai Customs, OSN has launched a content protection VR game at KidZania Dubai to educate kids regarding piracy. The objective of the game is to boost awareness of the threats of content theft.

It’s a commendable effort given that conservative estimates put the loss of revenue to the entertainment industries in the MENA as being between $500 million and $1.2 billion per year owing to content theft.

The 60-second game, called “Copycat Combat,”is a collaboration between OSN and Dubai Customs, who have a partnership in combatting the import of illegal satellite and IPTV devices as well as championing intellectual property rights (IPR.)

“Copycat Combat” is aimed at children between the ages of 5 and 12 and will be available to play at mall stands and other public spaces across the region managed by OSN. The game will also be toured in UAE schools by Dubai Customs as part of its ongoing educational initiatives to raise awareness of the importance of protecting IPR.

In a ‘matrix-style’ world, content thieves zap OSN’s precious collection of movies, TV series, kids shows and sports events with powerful laser rays. The game player must ‘shield’ the collection with armored gloves during an assault that requires fast reflexes and accuracy.

Sophie Moloney, chief legal officer, OSN, says in a statement: “This is super exciting for us at OSN, to be first in the world to launch a content protection game that helps children to understand the massive threats that the entertainment industry faces from content theft. What’s more, the game is a lot of fun and children can hopefully come away with the thought that content is really precious and worth protecting.”

Ahmed Mahboob Musabih, director of Dubai Customs, adds: “This initiative uses virtual reality and is based on the latest advanced applications in the field. The result is Copycat Combat, which will not only raise awareness about the importance of Intellectual Property but will also help kids innovate. This initiative is one of many steps we have taken following the vision and directives of our wise leadership. We are happy to have partnered with OSN to come up with this innovative product.”