The global short video platform, Likee compiled a report that analyzes the behavior and preferences of football viewers and fans featuring 1,215 respondents from 50 cities across 17 Arab countries.

For the ongoing World Cup, football fans around the world are glued to their screens and this is especially true for the MENA region. With Saudi Arabia, Morocco, and Tunisia qualifying, and this year’s tournament being held in Qatar, there is more reason than ever for regional football enthusiasts to tune in and cheer on loudly.

Community-based social media platform, Likee has launched a report that collected data from 1,215 respondents from 50 cities across 17 Arab countries. The report contributes to filling a large gap in data and insights about the sports preference of the younger generation

Across the MENA region, football remains to be the most popular sport with over 80% of respondents ranking the sport as their favorite. Basketball, Billiards, and E-Sports followed football as the most favorable sports within the region.

More than 60% of the fans surveyed, revealed that they try to follow their favorite sports multiple times per week to ensure that they are up-to-date on the latest developments. To stay connected to their favorite teams, 46% of fans try to either play the sport whenever they can and 44% of enthusiasts watch the games live as they are played. The remainder of the respondents try to remain engaged by either following the social media of their favorite teams, joining team fan groups, or trying to buy merchandise to support their teams. 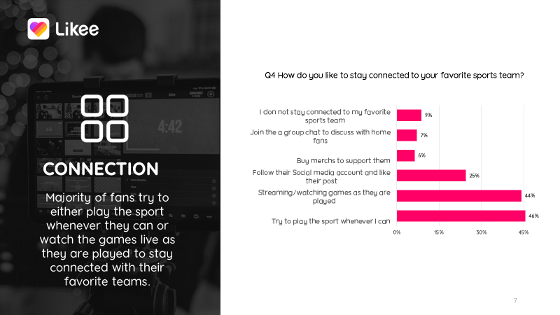 While analyzing the most preferred methods to remain connected to sports, traditional social networking apps seem the most prevalent at 53%. However, with short video content’s popularity rapidly rising in the region, short-form video platforms are being touted by fans as their next best option to follow sports. This is due to the power of short videos in which every second is designed to grab the audience’s attention. Platforms such as Likee are helping create high quality creative and diverse, yet easy-to-consume content which continues to provide more accessibility for viewers and content creators. 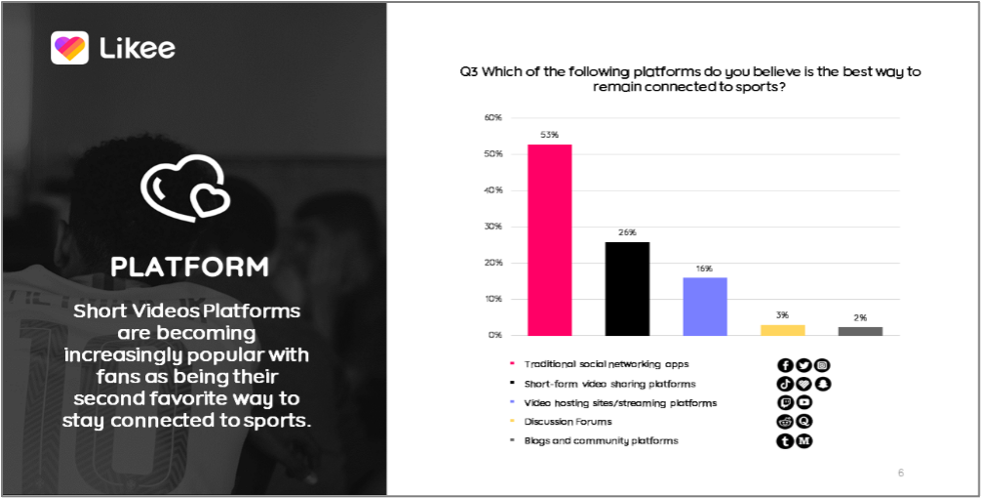 Over the years, social media has become a source of finding sports-related news and allows fans new avenues to interact and share opinions about their teams during global sporting events. The survey found that remixes of match video clips seem to be the most preferred viewing content by over 30% of respondents. This is followed by in-depth strategy analysis videos at 24.2%, football tutorial videos at 13.8%, and funny and dramatic football video clips at 11.6%.

There is an obvious sense of excitement across the region with 93% of respondents confirming their interest in following the World Cup this year. While roughly only 40% of people surveyed would be traveling to Qatar for the tournament, the remaining respondents expressed their pleasure in following the spectacle online. With the recent rise of innovative technologies, there are many ways for football enthusiasts to follow the World Cup this year. This sentiment was also expressed in Likee’s report findings which indicated that over 65% of respondents preferred watching sports at their own convenience either at home on the television, outside at a sports venue displaying the game, or anywhere outside at all on their mobile devices rather than watching it live at a stadium.

In terms of World Cup Favorites, Saudi Arabia, Qatar and Morroco were the most supported regional teams followed by Argentina, Brazil, and Germany among surveyed Arab youth. Most peculiarly, previous world cup winners, France were favored below Tunisia (ranked 10th) and ranked 11th in terms of teams being supported this year. 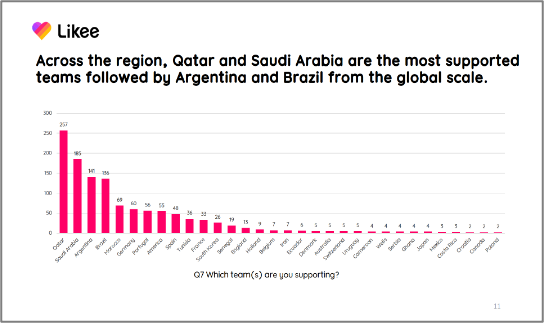 Egyptian Mohammed Salah and Saudi Arabian Salem Al Dawsari were among the most favorite players from the MENA region. However, with the ongoing tournament being one of the final World Cup competitions for football legends, Lionel Messi and Cristiano Ronaldo, they were the most celebrated players in this world cup.

The World Cup brings fans together in a lot of ways and short video platforms, with their intelligent algorithms, enable everyone to be able to share their stories and find like-minded people. With this in mind, more than 90% of fans agree that short-form videos build a sense of community for interacting with people of similar interests and up to 93% of these respondents are willing to join a vibrant football community on short video platforms such as Likee. 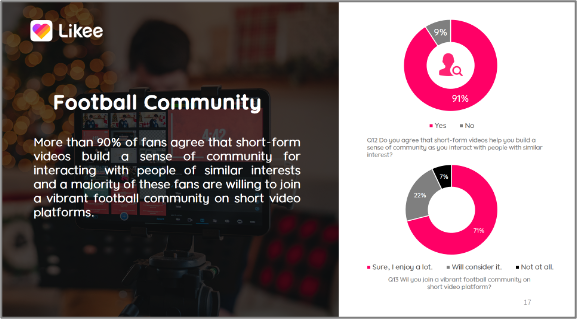 Based on the findings of the report, people look forward to joining football communities to mainly receive up-to-date match information at 44.7%, Livestream matches with others at 30.8%, have friendly communications with similar-minded individuals at 17.6% and discuss match predictions as well at 16.7%. The football community on Likee has been able to showcase their talents by making innovative content in every imaginable niche, and in turn, inspire the youth to play with their friends, hone their skills and attempt the amazing shots that they witness during games. 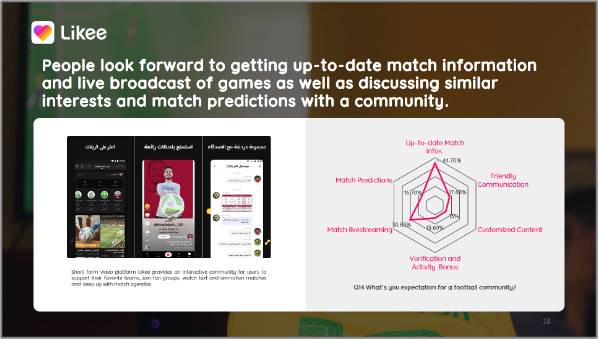 During the start of the World Cup, Likee introduced the World Cup event page under the platform’s community feature, Loop to foster and strengthen the community of passionate football fans on the application providing an interactive experience for users to support their favorite teams, join fan groups, keep up with match agendas, and so much more. Since the launch of the feature, users have been able enjoy a more interactive, immersive and entertaining experience while following the World Cup this year.

“The recent performances of the teams from MENA have been a spectacle to behold and we are glad that our users from the region have access to an ideal platform in Likee to connect with football enthusiasts.” said Gibson Yuen, Head of Likee Global Operations. “This year’s world cup is like no other and the excitement around the World Cup has not dropped ever since the start of the competition in November. Over the past few weeks, we have seen various great content being developed by football communities on Likee across the world. We are glad to support the unifying element of football of bringing people together to celebrate this great football season."