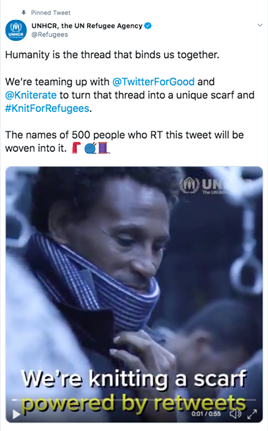 Twitter, UNHCR, and the London-based Kniterate has launched a global Twitter campaign, #KnitForRefugees.  Mainly powered through social media, the campaign depends on retweets to spread awareness and raise funds. Once a tweet is retweeted, users get an automated response asking for donations.

The campaign’s  initial launch has been in Dubai, after which it will be launched in the UK and USA, along with other stops. The companies said that the results  of the campaign will be shared at the “Global Summit of Refugees” in Geneva following its conclusion on 30th November 2019.

According to a press statement, the UNHCR’s Twitter campaign aims to “generate awareness and share a strong call to action to encourage people to act and make a difference.”  Through the partnership with Kniterate, the campaign will demonstrate the power of Tweets, “as a compact digital knitting machine begins to knit a tapestry featuring participating Twitter accounts.”

Ayat El Dewary, the UNHCR Officer in charge in the UAE, addressed the necessity of the campaign explaining that although “people want to help, they don’t know how to.”

She told  Communicate that they have seen this partnership as a natural fit. “They have the Twitter for Good program. Everyone uses Twitter, and it’s got a fantastic reach from all around the world,” she added.

“Twitter is where movements have been built,” Stephanie Terroir, Head of Brand Strategy, MENA at Twitter told Communicate. She added that the platform has given people the opportunity to be very receptive to causes and hence “make a difference.”

@Refugees has already tweeted a video  around the cause calling on action to retweet the tweet  to knit the first part of the scarf live on Twitter. The campaign, that has been launched on June 30th, will span  globally for five months.