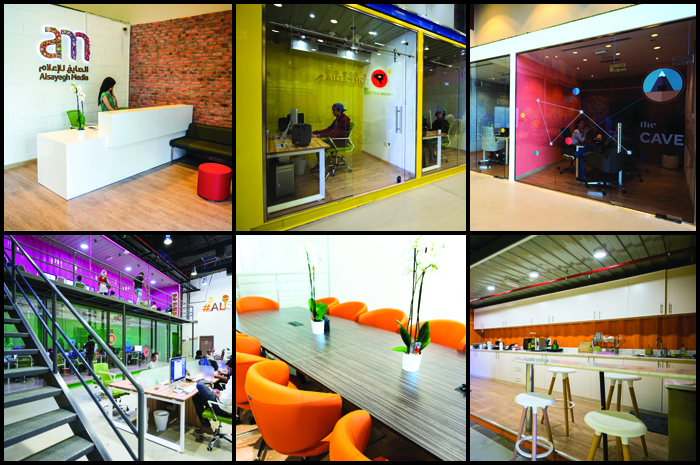 UAE-based full-service communications agency, Alsayegh Media, shifted from its old home in Cayan Towers, TECOM, to a brand new space in Dubai’s International Media Production Zone (IMPZ) in December 2015. Relatively new in the region, the company started only five years ago – no points for guessing – in a coffee shop. The move is indicative of the company’s growing team, services and portfolio.

“The opening of our new hub marks a significant step toward achieving some of our ambitious future expansion goals. It also provides an environment which has something for everyone, regardless of their specialization or responsibilities,” says Abdullatif Alsayegh, founder, chairman and chief executive of Alsayegh Media.

The new hub is the baby of the entire team. A small committee was appointed with representatives from different teams to participate in everything from the initial conceptualization and brainstorming down to the design and final touches – and this is only the first phase.

The two-floor office strikes a balance between open spaces and meeting rooms, ensuring that there’s room for both collaboration and quiet thinking. The exposed brick walls, shipping containers and steel girders give it an industrial look, but the vibrant colors and glass panels add a contemporary feel, making the office seem rather lively. The highlight is the Garden Lounge, which, as the name suggests, is a little spot of tranquility bathed in natural light and fresh greens. There are also recording and green-screen studios, breakout rooms, cutting rooms and mezzanine offices, as well as fully equipped kitchen and dining areas.

The idea behind the new space is not just to cater to and inspire the team, but also to welcome clients and visitors in a relaxed atmosphere. More importantly, the office is more of a long-term home, which will eventually allow for future expansion. The staff was welcomed to the new office in an opening ceremony at the beginning of December 2015.