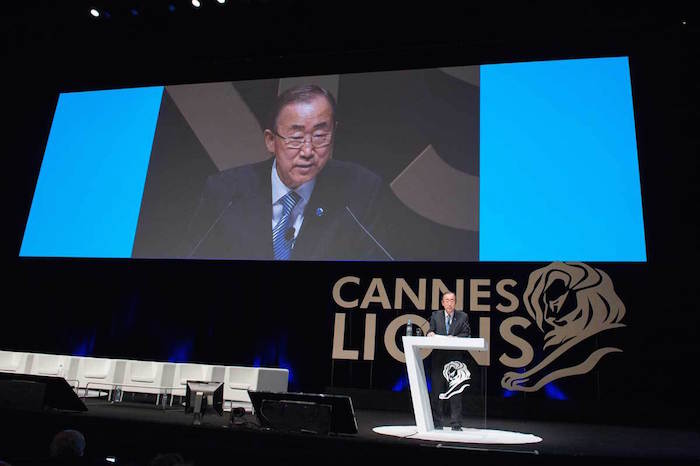 The world’s largest advertising and marketing service groups have decided, for once, to put their competitive differences aside and collaborate and support the United Nations for the good of the world.

The “biggest ever campaign of humanity”, as UN Secretary-General Ban Ki-moon put it, was launched at the Cannes Lions Festival, taking place this week.

“This initiative is not only about the advertising industry’s considerable influence in promoting Sustainable Development Goals around the world. By putting aside their differences, these companies are also setting a powerful example for others to follow,” the Secretary-General said ahead of the Cannes Debate.

What it all means

“In the short term, we want the 2030 Agenda to be known by two billion people. We want to mobilise one million people as change agents. Help us reach far and wide,” the UN chief told the International Festival of Creativity, a gathering of advertising, marketing and innovative communications professionals, held in Cannes, France.

The Common Ground program will start with a global advertising campaign, which will be displayed on places donated by key business and thought leadership publications.

Following the festival, each group will be tasked to focus on a specific area of the SDGs, where collaboration can be applied across parent companies.

The six groups agreed to provide a development fund for each of the winning ideas in the Cannes Young Lions Competition, devoted to the SDGs this year. Funds will be used to develop the concepts and support them to be put into practice. This is the first time the Young Lions have been given a development fund.

The initiative also aims to help other industries find their Common Ground.

“The Common Ground initiative recognises that the global issues the UN has identified transcend commercial rivalry. By working in partnership to support the Sustainable Development Goals, we want to demonstrate that even fierce competitors can set aside their differences in order to serve a wider common interest. We hope others in and beyond our own business decide to do the same,” said a joint statement by Tadashi Ishii, CEO and president of Dentsu; Yannick Bolloré, chairman and CEO of Havas; Michael Roth, chairman and CEO of IPG; John Wren, president and CEO of Omnicom; Maurice Lévy, chairman and CEO of Publicis Groupe; and Sir Martin Sorrell, founder and CEO of WPP.