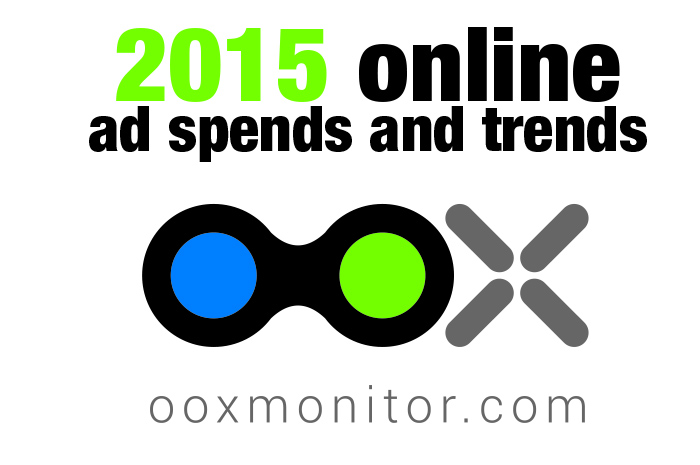 The past year has been the best on record for online advertising for the UAE, KSA and Kuwait combined, evidenced by a double-digit growth of almost 19 percent from 2014, according to OOXmonitor. In light of this, we take a look at the most prominent trends and numbers of 2015. 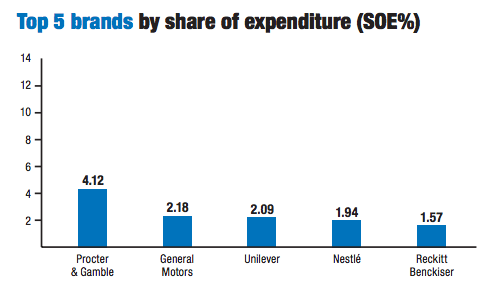 Procter & Gamble, General Motors and Unilever continue to maintain their positions from 2014. However, Ford Motor Company and Samsung have been replaced by new entrants Nestlé and Reckitt Benckiser, respectively. Despite the government’s investment in online advertising, the list of the top 50 brands remains dominated by non-government-owned multinational brands as well as regional and local brands. Based on online growth through 2015, the drop in oil prices is not expected to dampen the growth outlook for online advertising in 2016, according to the report. 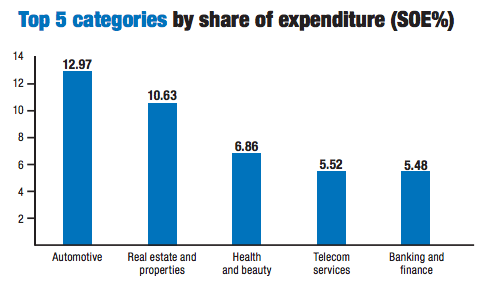 The top ﬁve categories remain the same from 2014, except for minor changes. Health and beauty moved up from the ﬁfth to the third position, gaining 1.77 percentage points from 5.09 percent in 2014. The telecom services sector dropped by 1.29 percentage points, while the banking and finance sector suffered a bigger drop and fell from 8.71 percent, witnessing a decline of 3.23 percentage points.

The top 20 categories represent 81.88 percent of the total ad spend versus 81.58 percent in 2014, which means that the leading categories are maintaining their dominance on the online ad market year on year – and will continue to grow in 2016.

The Medium Rectangle (MPU) and Leaderboard formats remain the top choice for advertisers in the GCC, with a more than 20 percent share of utilization, which basically means that the format was used in more than 20 percent of the monitored ad campaigns. The Logo format, which is associated with premium sponsorships, has gained in popularity slightly, indicating that advertisers prefer premium publishers who value the quality of content and brand safety over price.

Pre-roll and other video-related ad formats have more than doubled in popularity thanks to the sudden uptake of ad placements on YouTube and mbc.net’s Shahid – both of which enjoyed a high jump in demand for video ad placements in 2015.

November and December have been the best-performing months in 2015 while January and February have been the least-performing months. Although January and February started off slow in 2015 as opposed to 2014, the rest of the year largely overcompensated for the decline of the first two months, recording a bumper year for online advertising in the GCC. According to the report, this is a lesson for 2016: don’t panic if online ad investments come short in the first quarter.

Although the outlook for 2016 doesn’t look good owing to geopolitical and economic factors, the report suggests that this might be the very reason for the growth of online ad spend. Online advertising is seen as a “refuge medium” during a crisis due to “its perceived low-cost high-measurement value – similar to what was witnessed during the last economic downturn, back in 2008-2009,” says the report. Moreover, the consumption of the digital medium is resulting in online taking a larger share of the pie – at the expense of print and TV – and this trend is likely to continue to enhance the positive outlook for digital advertising in the region through 2016.

OOXmonitor is a multi-market competitive online advertising monitoring service in the MENA region, present since 2008. It currently serves the UAE, Saudi, Kuwait and Egypt markets with data that runs back to 2007.

– The ad spends are net estimates in USD and account for an average error margin of 20 percent in both directions.

– OOXmonitor covers display, video, sponsorship and road-block online advertising activities targeted to browsers on desktop/laptop devices. Mobile, search, native and other emerging ad formats are not covered in this report.

– The monitoring methodology is based on a daily sample of page views across all monitored websites and allows for an error margin of five percent in campaign reporting.

– The above report is a preview of the OOXmonitor database. OOXmonitor subscribers have access to more in-depth data and reporting.

– Full or partial reproduction of this report without prior written approval from OOX is strictly forbidden, in digital or any other media type or format. The terms of use described at www.ooxmonitor.com/terms-use shall apply to this report.

– This report is licensed to Mediaquest Corp. to be exclusively published in Communicate magazine and its website in the February 2016 edition.

– OOX is the trade name of Out-n-out Online Xperts FZ-LLC, the company. OOXmonitor is the name of the flagship online advertising monitoring service by OOX.