Given the role that women play in deciding on the everyday brands used in households, women are central characters in many advertisements. Traditionally in many developing markets, stereotypes were often used to portray the role women played. Most advertisements were centered around activities performed by women at home to make the family happy, portraying their dependency, and not making any important decisions.  While growing up, when TV was the most dominant media, every commercial break out there would show advertisements with women either doing laundry or other household chores to ensure family confidence. For example, Nirma, a laundry powder brand in India, showcased the importance of clean clothes for the family to stand out in a crowd.

ALSO READ: How brands are empowering Saudi women to drive

Fortunately, a couple of decades have passed, and some of the old stereotypes are giving way to new approaches to advertising in developing markets. Ariel launched its “Is Laundry Only a Woman’s Job?” campaign, which challenges the typical stereotype that was predominant for years. This was followed by the “Share the Load” campaign, which won a Cannes Lions, not only achieving results for the brand, but also leading to a broader cultural change in behavior.

Stereotypes are a reality in society

Ariel questions stereotypes in its “Share the Load” campaign

But, we have seen over time that ‘reel life follows real life’.  A recent study by Havas reports that nearly half of women surveyed agree that TV commercials show too many outdated gender stereotypes.  Furthermore, a similar amount resent how women are depicted in advertising. As the role of women has changed in the developing world, with more and more women joining the workforce, this change is inevitable in the role played by women in ads. Advertisers need to seize this opportunity and portray the roles they are playing in today’s world.

One example of what isn’t working anymore: 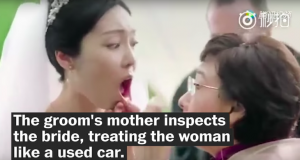 Audi produced an advertisement in China that likened women to used cars. After receiving significant criticism, Audi apologized and withdrew the ad. There is now lower acceptance of portraying women as objects.

And a few of what works:

Recognizing the importance of using consistent brand cues, both visual and verbal, that resonate with the brand is important to present a more realistic and reflective picture of woman.

For example, in Saudi Arabia, which is perhaps considered a more traditional society, Brooke Bond Red Label challenged social prejudices by portraying a free conversation between a father and daughter about a failed marriage.

SK-II launched a global campaign “Marriage Market Takeover” to inspire and empower women to shape their own destiny, challenging the idea of “sheng nu” or “leftover woman”, a term used for women who aren’t married and are treated shamefully after age 25.

Or take the example of Nike, which created powerful ads to challenge female stereotypes in Russia, Turkey and the Middle East.

So, how are advertisers expanding the roles of women in advertising in the developing world?

One role that remains powerfully important, although it is shifting, is the role as a mother. Women in developing markets still play a more active role in parenting and spend, on average, more time with their children when growing up. This theme is still used extensively by advertisers. Ipsos’ database also shows that advertisements that show bonding between mother and children have a better chance of attracting attention.

Furthermore, when advertising household products, while the stereotype is shifting from portraying women in subordinate, not authoritative roles, there has been some progress by brands to challenge these stereotypes. Storylines focused on women empowerment are showing encouraging success. For example, Cif’s “Christ the Redeemer” from Brazil tells a different story. There is movement, but there is still a long way to go.

RESEARCH: 74% rely on traditional media for product info & 9 other things to know about women shoppers

For categories targeted at both genders, there is a significant change where both men and women play equals. This is promising, and one can expect to see faster change in the future.

Recently in Saudi Arabia, Nescafe’s commercials emphasized the equality of both genders in conversation, which was unthinkable a couple of years back.

There are many such examples, but the question is, is this effective? Ads that portray women in a positive light have a higher chance of success, as this makes the brand stand out in the crowd. Ipsos database analysis demonstrates that ads, which make the brand stand out in a new way, have significantly higher chance of success. In this regard, it may become more important to show a more realistic and balanced picture; a modern-day woman, who plays multifaceted roles and emerges as one who is, not only in full control of herself, but also has the power to influence others around her.

As demonstrated by the Audi ad discussed earlier, advertisers need to be careful not to show women as objects in advertisements. It may be a common belief that sex sells and therefore the tactic becomes taking advantage of the female sexual image by equating it to the advertised product. Such advertisements degrade women to some extent. There are innumerable examples across various categories, including food and beverages, which depict women as sexual objects, but the question remains if this has a positive impact on the brand.

INSIGHT: From physical intimacy to time travel… all you need to know about the Arab woman

Although the impact may vary from one category to another, objectifying women in this manner does not have a strong impact on the brand. It may attract more attention but as per Ipsos’ database, ads that have sex or nudity in the storyline have lower impact on the brand than those that do not.

Not only are such ads not effective for the brand, objectifying women beyond what is natural, could also be harmful to individuals and our society as a whole.

It will be interesting to see how the portrayal of women’s roles will change in future, but the initial efforts are quite encouraging. Several global bodies, such as the Cannes Lions, are recognizing the work done around gender equality in advertising. So, why not play a pivotal role in shaping the way people traditionally think of advertising by being bold and challenging the status quo? Show what is the reality today in the world.

As This Girl Can creator Tanya Joseph said at Marketing Week, recognize that women have significant purchasing power:  stop casting them in secondary roles or treating them like accessories. If you are not ready to be bold on mainstream media, perhaps you can experiment with new ideas through digital channels. But the cultural shift is happening, so it is time to be prepared.

Continue Reading
You may also like...
Related Topics:Advertising, advertising-dubai, women

Put your money where the data is!
By Jennifer Kanaan: 8 realities you will face when moving from agency to freelance