Criticize it, rave about it, or try and mimic it; if there’s one thing you can’t do, it’s ignore it. Quite obviously, we’re talking about the tech giant, Apple and more specifically, its slew of new releases earlier today: the iPhone 6, iPhone 6 Plus and the Apple Watch. While consumer sentiment ranged from excitement to cynicism, we were curious to see other mobile brands react to the announcement of the “best iPhone yet” and the “most intimate device Apple has created”. Scroll down to see what they said:

Samsung didn’t get into the mud fight. It stayed classy and under-key. Except the part where it either forgot or didn’t care too much, about the quite prominent ‘Promoted by’ tag right below the trend. 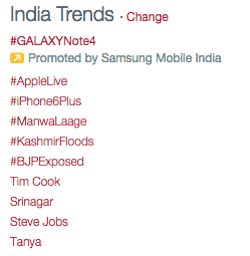 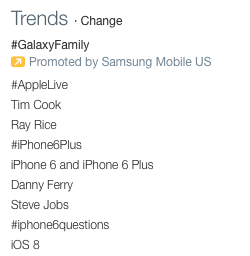 At least it was witty

While it started off being subtle, clearly things got personal too soon

We take things personally too. #Cortana vs #Siri https://t.co/VDfsJaGJ10

There’s a reason it is last on the list