Following the Saudi Royal decree permitting women in the Kingdom to drive, automotive brands have been quick to adjust their marketing strategies. Most jumped online to congratulate Saudi women ­– Nissan being the most prominent among them. Ford, too, was quick to put out the below tweet garnering 15,456 retweets and 34,113 likes till date ­– significantly more than Nissan’s 821 retweets and 826 likes despite the fact that Ford’s ad was found to be a copy (or inspired) version of the below ad by Lebanese media house Raseef22, which won at the Dubai Lynx last year. 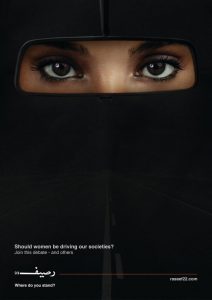 The original ad by Raseef22 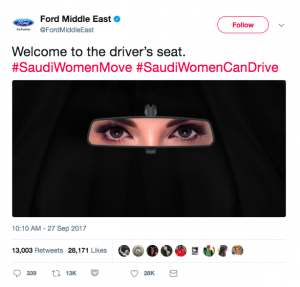 The copy by Ford Middle East

As brands clamored to make their mark felt on social media, there is one brand that is taking action. Renault Middle East, along with its distributor, Gulf Advantage Automobiles, is giving away seven cars to the first seven Saudi females to visit one of Renault’s seven showrooms in the Kingdom. These women must present their driving license in order to qualify for a chance to win the Renault Captur. In a press statement, the brand says, “This initiative is the first of many expected from Renault as they look to establish a long-term relationship with Saudi female drivers.”

Considering women can only drive by June 2018, and will most likely receive licenses only by then, Renault’s giveaway seems more like a marketing gimmick than a true attempt to “establish a long-term relationship with Saudi female drivers”. International driving licenses are NOT applicable for the giveaway. When asked why the offer is being advertised now and not closer to June 2018, a spokesperson from Renault commented, “Since the news of the Royal Decree has broken, there has been much excitement and anticipation amongst Saudi females, who will no doubt start considering which car they will want to drive when they receive their new driving license. Renault is opening communication with Saudi females now, to lay the foundations for a long-term relationship with this new car buying audience.”

How brands are reacting to Saudi women driving
Wix.com gets Super Bowl offer it can’t refuse